In 'news-you-definitely-didn't-think-you'd-read-today', a plaque dedicated to Saddam Hussein has appeared on a bench in the middle of a busy high street in east London.

The bronze plaque, which reads 'In loving memory of... Saddam Hussein, 1937 - 2006', was noticed by residents of Wanstead, and has caused considerable outrage.

One journalist, Victoria Richards, took to Twitter to post a picture of the plaque with the caption:

So this has just appeared on a bench on my local high street. 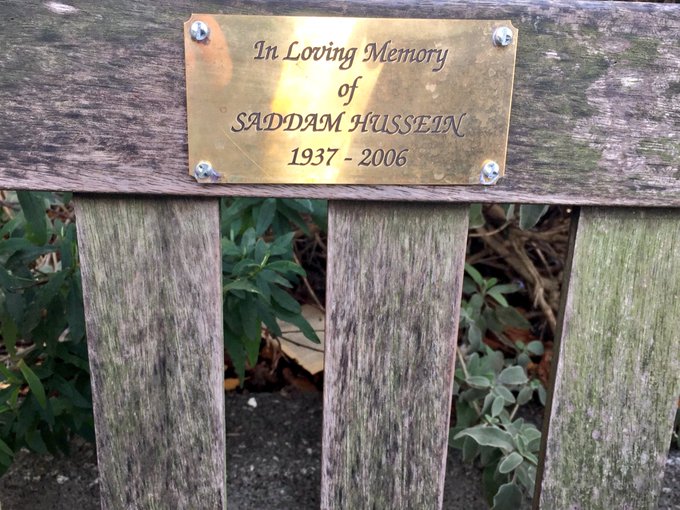 So this has just appeared on a bench on my local high street.

The plaque has also been fixed in place with anti-theft screws meaning it is difficult to remove, and that the eulogy to one of the world's most brutal oppressors will stay in place for the foreseeable future.

The dates included for the birth and death of Hussein, who brutally oppressed Iraq with violence and fear for 30 years, before he was hanged in 2006, are correct.

Melissa Munday-Chanin, 38, who lives in the area, told The Independent:

I was horrified. My mum was over visiting and pointed it out to me and was utterly shocked - so I checked it immediately.

I thought she surely must’ve been mistaken but to my horror she was right. I think someone celebrating the life of a man who’s caused such terror is outrageous. And if it’s a joke, it’s not remotely funny.

A picture of the bench plaque was also posted onto the Facebook page 'S*** London' with the caption:

One Facebook user, reports The Sun, hoped it was a coincidence:

Same years of life too, coincidence? I hope so. Unfortunate one though if it is and of it isn't it shouldn't be allowed but I hope it is and that it's a decent chap being remembered and not the dictator.

Another thought it was a very high level of trolling:

Someone either screwed up royally or this the most epic level of trolling I’ve seen so far.

Many people on Twitter were also quick to share their amazement at the bizarre plaque, and to say they assume it's a prank.

Kind of a low benchmark to set...

We didn’t give permission for this to be put up and it has been removed.