A newborn baby girl left both midwives and her own mother stunned after being born with a full head of jet black hair.

Operations manager Georgia Robinson, 22, from Burnley, Lancashire, couldn't believe her eyes when her daughter Tia was delivered on June 18, as she already had a full head of thick raven locks.

The mother-of-two has told how the midwives at Burnley General Hospital were equally gobsmacked, as they had never seen a newborn with so much hair.

Now, less than a month later, Tia's rapidly growing mane has already passed her ears - and Georgia has no intention of cutting it anytime soon. 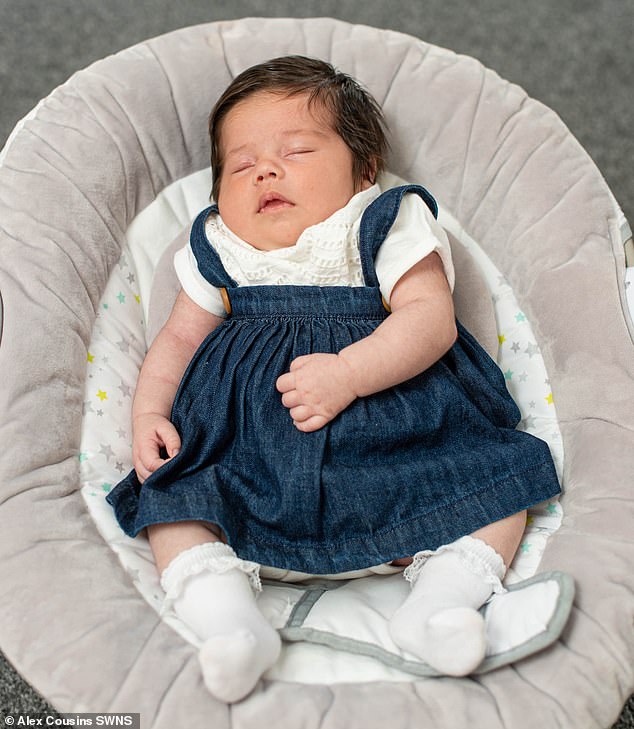 The proud mother, who worked in operations before falling pregnant, said: 'I couldn't believe it when I saw her, there was so much hair, I really wasn't expecting it.

'The midwives were as shocked as me, they were saying they had never seen anything like it.

'My friends and family are all absolutely obsessed with her and the hair is the first thing everybody talks about.

'It's growing really quickly and we've had to start putting clips in already. She loves having her hair brushed and washed as well.'

Georgia and her partner Bradley Duffy have a two-and-a-half-year-old son, Ellis, but recalled that he didn't have half as much hair when he was born.

The couple also said Tia's hair colour is a bit of a mystery, as none of them have locks as dark as hers. 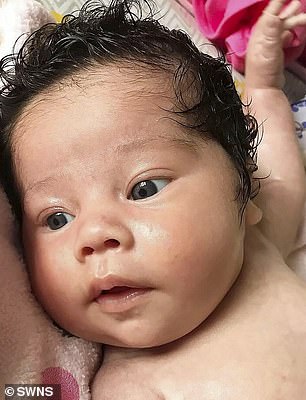 She said: 'Everyone loves Tia so much. Her brother Ellis loves her and is always giving her lots of hugs and kisses, which is great.

'I have posted pictures of her on Facebook and everyone loves her, she's getting loads of likes.

'Even when we're out shopping people stop us to say hello to Tia. Luckily she's really well-behaved and loves the attention.'

A baby's hair as a newborn bears little resemblance to what he or she will look like as they grow older and some infants lose their hair just a few weeks after being born due to hormonal fluctuations.