A toddler nearly died and was left with third degree burns all over his body after he pulled a vegetable steamer filled with two gallons of boiling water over his head.

Dougie Dodd, then aged one, suffered horrific burns to his face, neck, chest, hands, wrists and feet after a spoon he was playing with got tangled in the cables connected to mother Nadia Hulse's broccoli and cauliflower steamer.

The 25-year-old, from Cannock, Staffordshire, lunged towards her son but was too late to save him as the three-tier machine toppled over and spilt its contents across the kitchen.

He was in hospital for two months, fighting for his life as he battled infections from the third degree burns that covered half of his body.

'I was right next to Dougie when it happened, and I tried to stop the steamer falling, but I just couldn't move fast enough,' said Nadia as she re-lived the experience.

'He was touch-and-go in the hospital at one point, and I just couldn't stop crying, I was an absolute mess.

'I practically lived in the hospital with Dougie. I was so scared of losing him.'

Receptionist Nadia was overjoyed when she found out she was pregnant and gave birth to her only son on 24 July 2017.

The single mum learned how to juggle household chores with looking after a boisterous baby.

She was preparing dinner in the kitchen at home on March 8 this year, with little Dougie playing on the floor when disaster struck. 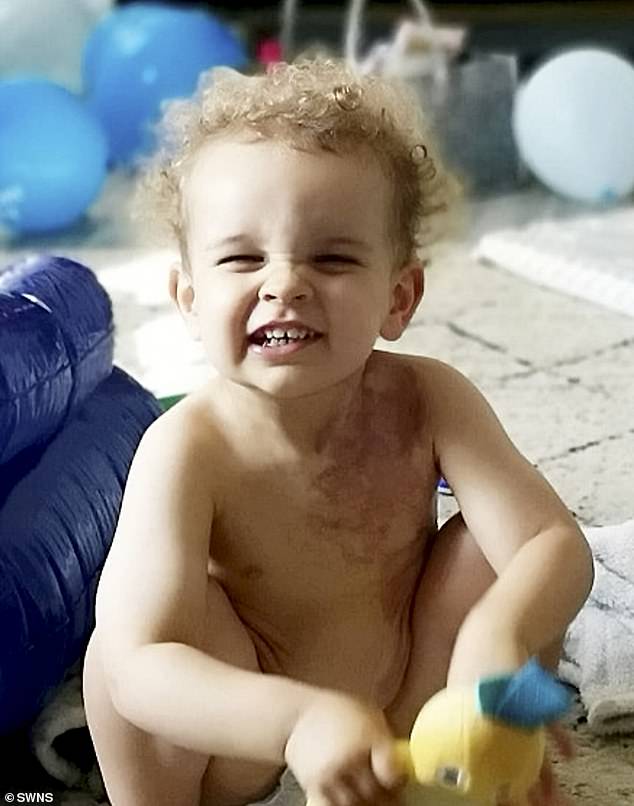 Nadia said: 'I turned the vegetable steamer on to heat up the water.

'I was sitting at the kitchen table with the phone propped up on video chat to my mum, showing her Dougie sitting on the floor playing with the saucepans when he suddenly reached up towards the steamer with his spoon.

'I shouted 'Dougie, no!' which startled him, and as he jumped back, the handle of the spoon got caught on the wire and the vegetable steamer tipped.

'I lunged forward but I just couldn't get there fast enough and the steamer toppled over, covering Dougie in hot water and vegetables.

'I stripped Dougie and raced him upstairs into a cold bath but he was screaming hysterically, trying to climb out of the bath and onto me.

'I had to hold him down and keep putting cool water on him until the ambulance came, and as much as I wanted to pull him out and cuddle him, I knew he needed to stay in there so he wouldn't be in any more pain than he already was.'

Nadia's mother raced to the house after watching the scene unfold on FaceTime and called an ambulance for Dougie as his skin bubbled in blisters.

Paramedics gave him morphine and covered his burned body in cooling gel before wrapping him in cling film to prevent any infection.

The traumatised toddler was rushed to Birmingham Children's Hospital and diagnosed with third degree burns across his face, neck, chest, hands, wrists and feet.

Nadia said: 'Dougie's body was all red and sore, so when the burns on his neck and wrist started turning white, I thought that was a good sign, like his body was fighting back.

'My heart broke when the doctors explained that the burns turning white meant the nerve endings could be damaged and were therefore less likely to repair themselves so he could end up needing skin grafts.

'The doctors told me they might need to shave his hair to stop the burns getting infected which upset me as Dougie has these gorgeous, golden curls, but I just wanted them to do whatever they could to help him recover the quickest.'

Over the next few days, Dougie was kept in hospital as doctors checked his blood vessels for nerve damage, drained his blisters and shaved the front of his hairline. 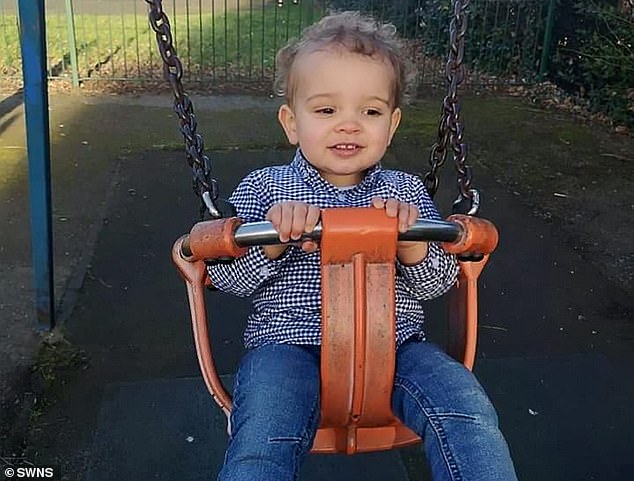 When the burns that had turned white did not regain pinkness, Dougie was taken into theatre for skin grafting with skin taken from his thighs to cover his left wrist and chest.

The toddler was bound in bandages head to toe to prevent infection and help his skin recover, and went under anaesthetic in theatre every other day to have his wounds cleaned.

Nadia said: 'When he got the grafts, it was horrible. Me and his dad had to take him through to theatre and hold the mask over his face while he went to sleep.

'We were both crying, but the doctors reassured me that it would help to prevent scarring and help him to heal a lot quicker.'

After a long week in hospital, Nadia was finally able to take her little boy home.

But her joy was short-lived as Dougie became ill and was admitted again after just one night at home.

Nadia said: 'I was so happy that we could try and get back to a bit of normality and be able to see him in his own environment again.

'The first night he was really quiet and lethargic but still happy as we sat on the sofa and watched cBeebies before bed.

'In the night, he pulled his bandages half off his face - I was worried about pulling them off completely in case I made the scabs any worse but also worried about leaving them on in case they wrapped round his neck in the night.'

Nadia took Dougie back to the hospital the next morning on 14 March 2019 where a nurse noticed he had a high temperature and his hands had come up in a pin prickly looking rash which is a symptom of toxic shock syndrome.

Toxic shock syndrome is a sudden and potentially fatal medical condition caused by a bacterial infection.

Blood tests confirmed Dougie had TSS and as his blood pressure hit a staggering 190, he needed an oxygen mask to breathe and doctors were forced to administer a blood plasma transfusion.

The toddler was closely monitored by doctors, and if his condition didn't improve in the first few hours, Dougie would need to go to the intensive care unit or he could die.

Nadia said: 'The doctors had said they'd like to keep him in overnight after spotting the rash but ultimately it was up to me, and I'm so glad I went with my gut and kept him in there.

'I felt so sorry for him, I just wanted to take the pain away from my little boy.

'The consultant and nurses stood around his bed with us and said we will keep an eye on him so it's going to be an unsettled night and that the frozen plasma will hopefully help his body to fight the infection. 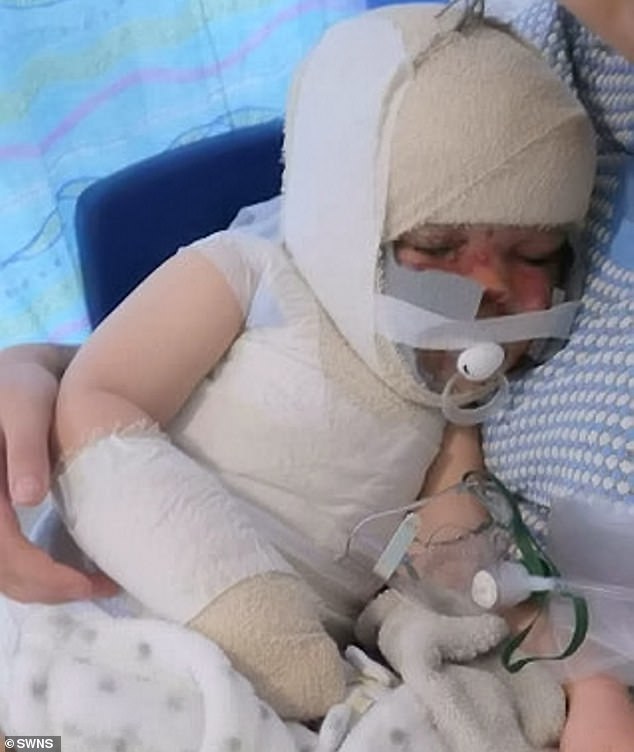 'I asked what happens if it doesn't and the consultant said they'd have to take him to the ICU to keep a closer eye on him and help him fight the infection.

'I burst into tears, I felt so sick and was a wreck as a nurse hugged me and made me a cup of tea to calm me down.'

A few hours after the plasma transfusion, Dougie's temperature, oxygen and blood pressure started to improve as his body began to fight the infection.

The little boy was in hospital for another week as doctors did more blood tests to make sure that the infection had cleared.

He had to return to the hospital every other day for surgical day care but was finally discharged when he was more healed on 8 April 2019.

Dougie, now two, is back to being himself again but still has to wear a compression vest daily for as long as possible to prevent excess skin tissue growing and turning into a hypertrophic scar.

Doctors have said the toddler can either sleep in the vest overnight or wear it for a few hours on and off throughout the day.

Nadia said: 'Dougie is such a happy, lively little boy and has not changed his outgoing personality one bit, but I still feel guilt.

'I know it was a freak accident and the only thing I could have done differently was to not let him play with the saucepans, but I wish I could turn back time and get his cars out for him to play with instead!

'It still breaks my heart to think about it which I do everyday and to see the pictures of him in the hospital.

'I worry about him growing up with his scars, but will constantly reassure him every day of how brave he was and how beautiful he is with his scars, and that they will fade as he grows older.

'I'm just so grateful for the hospitals fantastic work and that he's ok - they worked so hard and saved his life.'