The family of a young woman critically ill with cystic fibrosis have issued a plea to NHS chiefs and drug firm bosses to provide her with a breakthrough drug that could save her life.

Nicole Adams, 28, from Belfast, is in the end stages of the genetic disease that affects 10,000 Britons and kills half of sufferers before they reach the age of 40. Nicole’s lung function hovers at just 13 per cent, leaving her struggling to breathe.

Hospitalised a month ago with flu, in a video message to well-wishers she described the feeling as ‘like being suffocated by my own body’. Her condition seemed stable until Wednesday, when she was suddenly rushed into intensive care. Doctors are now battling to clear her airways.

Her only real hope lies in a new medicine that can dramatically improve lung function – but the pioneering pill is not yet licensed in Europe or approved for NHS patients. UK doctors may not be able to start prescribing it until 2021, as financial watchdogs who assess drugs are ‘very busy’ at the moment, according to sources.

The drug, called Trikafta, has, however, been available in America since October, after US authorities gave it the green light following ‘stunning’ clinical trial results. In the next few months it will also be available in the Republic of Ireland – just a short train ride away from Nicole but under an entirely separate healthcare system. 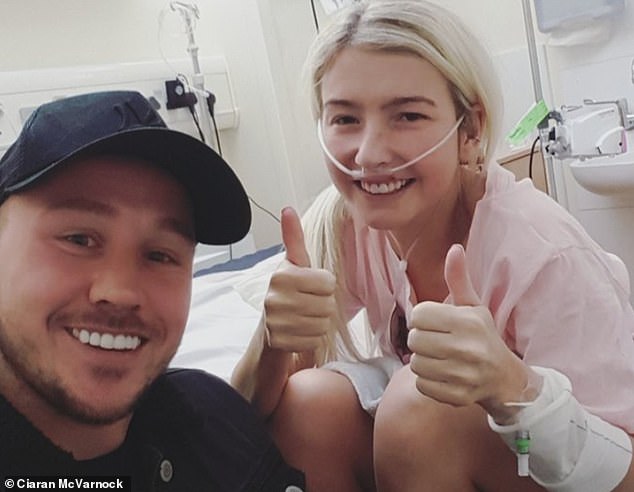 Trikafta has been dubbed the ‘Holy Grail’ by cystic fibrosis sufferers and campaigners.

Although it has not yet been passed by the European drug safety body, the company which makes it, Vertex, could bypass the system and supply it directly to Nicole’s medical team. So-called ‘compassionate use’ of new drugs is legal, if sanctioned by doctors in a bid to save the sickest patients.

Nicole’s devoted boyfriend Ciaran McVarnock has also launched an appeal to raise the estimated £20,000 it would cost to buy a one-month supply of Trikafta from America. By yesterday they had almost reached their target. Yet, while the fund may buy Nicole time, what she and other patients in similarly bleak situations need urgently is a longer-term solution, say her supporters.

Speaking last week to The Mail on Sunday from Nicole’s bedside at Belfast City Hospital, Irish boxing champion Ciaran, 27, said: ‘They’re calling Trikafta the wonder drug. It’s saved lives, and we need to get it for Nicole as soon as possible.

‘I know it’s a complicated situation, and the care she has received is incredible, but this is life and death for her – it makes me so angry and frustrated that the drug is out there and that she can’t get it.

‘We’ve been overwhelmed by the positivity from around the world – we’ve even had cystic fibrosis patients in America offer to send Nicole their Trikafta tablets, saying it’s made them feel so much better they could do without it for a bit, but of course we can’t accept.

‘She needs her doctors to give it to her, and she ticks all the boxes to receive it on compassionate grounds. Nicole is a fighter, she is so strong, but I’m worried about how much fight she has left in her. She is trying to stay positive. We all are. But she needs Trikafta now.’ 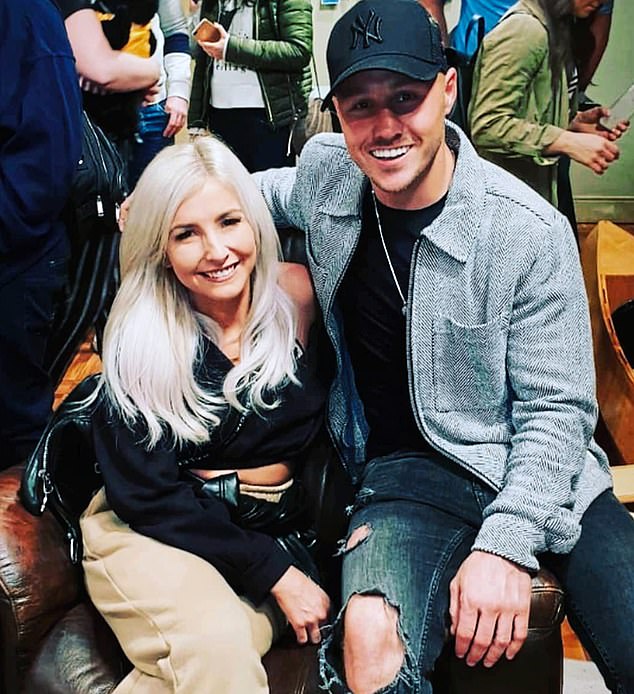 At the end of October, the Government announced a landmark deal for cystic fibrosis medicines – ending a four-year row with the drug manufacturer, Vertex, over costs. The contract to supply the tablets Orkambi and Symkevi was said to be the largest financial deal of its kind in NHS history – potentially amounting to £100 million over two years. But the talks dragged on for so long the drugs are now, since the introduction of Trikafta in America, ‘obsolete’, some campaigners have claimed.

Last month, this newspaper revealed how NHS chiefs, under pressure from politicians wanting to break the deadlock, signed the deal for Orkambi and Symkevi – but not Trikafta, because they were unable to agree on a price for the newer drug. At present, if a medicine is to be approved for routine NHS use, first the European Medicines Agency has to give it a licence. Then UK prescribing watchdog the National Institute for Health and Care Excellence (NICE) assesses its value – a complex calculation based on the cost of the drug versus how well it works.

If it brings a significant improvement in quality of life and reduces the amount of other treatments a patient needs, it is deemed cost-effective and given the green light. Finally, NHS England make a financial agreement with the drug’s makers before it goes to patients.

Publicly available documents show that Vertex wanted NHS England to pay a single price per patient, per year, that would cover all cystic fibrosis drugs, as well as those being developed – namely Trikafta, which was showing promise in trials from 2017. Although financial details are confidential, The Mail on Sunday has been told the amount Vertex was asking for was close to £50,000 – for Orkambi, Symkevi, an older drug Kalydeco, and the then-forthcoming Trikafta.

NICE and NHS England would pay only up to £12,000 per patient, per year, sources have said. And not without reason: Orkambi and Symkevi bring about only a modest improvement in health. Many clinicians believed the price Vertex was asking was too high. Vertex argued the figure reflected the game-changing nature of Trikafta.

NHS chiefs seemed unwilling, or unable, to put faith – and finances – into a drug that wasn’t yet launched. Neither side was prepared to budge and in May, despite all parties knowing how important the new drug was, Trikafta was ‘taken off the table’ in talks. The result of the impasse is that Trikafta was approved for use in America on October 21, and two days later Orkambi and Symkevi – older, less effective drugs – were approved for UK use. 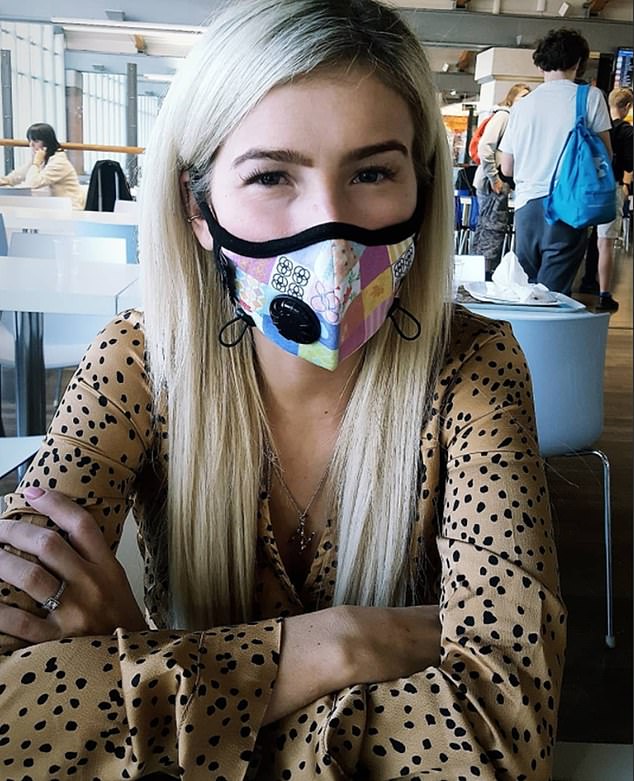 While they do stabilise symptoms, slowing deterioration, Trikafta, improves lung function – and is four times as effective. And while Orkambi and Symkevi work for less than 45 per cent of cystic fibrosis patients, Trikafta is effective in 90 per cent of cases. Experts anticipate almost all patients on Orkambi or Symkevi will switch to the newer drug, once they can get it. Many suggest it will turn cystic fibrosis from a fatal illness to a chronic, manageable disease – extending life expectancy.

Nicole has battled gradually worsening health since her teens, and other complications mean a heart and lung transplant isn’t an option. She was given early access to Orkambi at the end of last year but suffered a bad reaction and had to stop taking it.

She ran her own hair salon in Belfast but earlier this year was forced to close the business due to her worsening health.

She was started on Symkevi at the beginning of last week and seemed to be getting stronger. But then, on Wednesday, her condition suddenly worsened.

Cystic fibrosis causes thick, sticky mucus to build up inside the body – clogging the lungs and digestive system. This leads to problems with absorbing nutrients and makes sufferers prone to infections in the airways. The result, ultimately, is irreversible, fatal lung damage.

Orkambi, Symkevi and Trikafta all work by ‘switching on’ a process in cells that helps balance the levels of salt and water in bodily fluids, thinning the mucus.

At first, the drug can cause a dramatic increase in the amount of mucus in a patients’ lungs, which then has to be coughed up. This, say her family, may be the cause of Nicole’s current, acute breathing difficulties.

For all cystic fibrosis patients, daily physiotherapy sessions involve exercises designed to help bring up mucus from the lungs, clearing the airways.

But for someone as unwell as Nicole, who is unable to walk more than a few feet without becoming utterly exhausted, these sessions represent a mammoth physical task.

Whatever happens next, for a patient such as Nicole with end-stage cystic fibrosis, Trikafta could be not simply a lifeline, but a chance to live normally again.

To add to the family’s frustration, after a deal done last week by health chiefs in the Republic of Ireland, patients there will be prescribed Trikafta as soon as it gains a European safety licence, expected by April. The Irish Health Service Executive signed a pipeline deal – of the type ‘taken off the table’ in UK talks.

This will come as little comfort to Nicole and her family in Northern Ireland, which is under the NHS.

In the past two weeks, following The Mail on Sunday’s initial report, NHS England and NICE have met, separately, with Vertex to try to thrash out a deal for Trikafta. 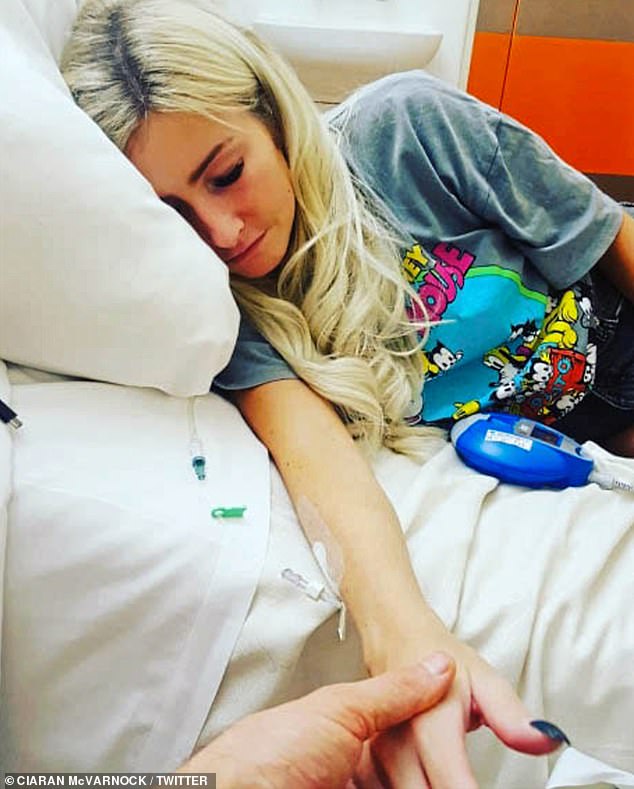 A source close to the negotiations said: ‘NHS England have now said they want to do a deal as soon as possible for Trikafta, so the UK doesn’t lag behind other European countries when the drug is approved in early 2020. But NICE have said they’re very busy, and it could take up to a year to assess the drug.

Many people involved feel this is completely unacceptable, when patients are in such desperate need right now.’

Nicole remains in a critical condition. But as soon as she is well enough, her family want her to be able to start on Trikafta.

Ciaran said: ‘She should have had it before now. It’s what she really needs.

‘But it’s not just about Nicole, it’s about everyone who comes after her – I’ve seen first-hand what people with cystic fibrosis go through. They need Trikafta now.’

A spokesman for Vertex said: ‘We cannot comment on specific patients, but take all requests for compassionate use of our medicines very seriously. We are working diligently to assess these requests as quickly as possible once they are received from a patient’s doctor, which is the sole means of initiating this process.’