Ebola prevention activities have been suspended in the Democratic Republic of Congo city of Beni after a deadly rebel attack.

Treatment centres will stay open but vaccinations and the tracing of people who have been in contact with suspected Ebola patients have stopped for now.

One hundred people have died in the current outbreak in the east of the country, the health ministry says.

The rebel attack in Beni started on Saturday afternoon and lasted for several hours. Eighteen people died including 14 civilians, the army says.

Local sources say the Allied Democratic Forces, a Ugandan Islamist militant group active in the area since the 1990s, was behind the attack, but this has not been confirmed. 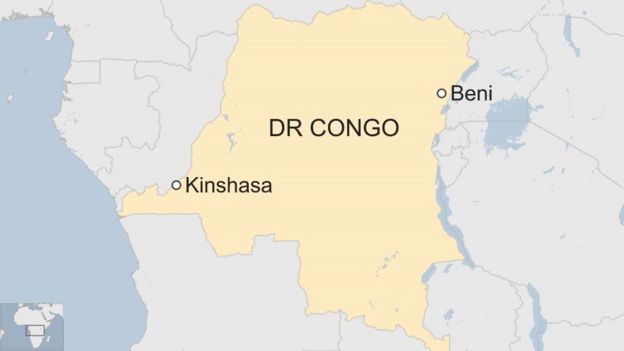 Representatives from aid agencies working on the Ebola response are meeting to assess whether to increase security measures in Beni, reports the BBC's Louise Dewast in the capital, Kinshasa.

Some residents of Beni have taken to the streets to protest against the security problems.

The World Health Organization (WHO) had warned in August that insecurity in the region could affect the Ebola response.

At the time, the WHO's Peter Salama described it as a "dreaded" scenario.

This is the second Ebola outbreak in the country this year. The previous outbreak, in the west of the country, killed 33 people, according to the government.