This is the shocking moment a monkey which had kidnapped a kitten holds it while eating bananas - and neither the monkey nor the little have been seen 48 hours later.

The primate grabbed the feline as it wandered around outside a home in Rayong, eastern Thailand, last Saturday afternoon. 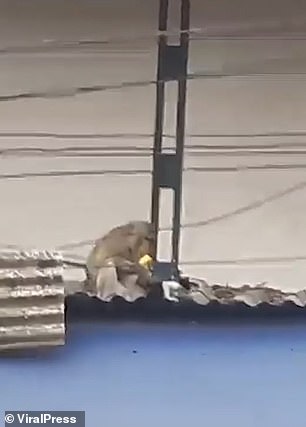 Footage shows the monkey on a roof holding the terrified kitten in its arms before it eats a series of bananas as shocked onlookers look on in horror.

Neither animal have been seen since, more than 48 hours after the monkey took the cat.

Concerned neighbour Chantra Sakulphitak, 50, said: 'The monkey was seen on Sunday morning again with the kitten. But it was then seen alone on Sunday afternoon at 4pm without the kitten.

'Since then nobody has seen either of them again. We don't know if the monkey has killed the cat or it escaped and ran away.' 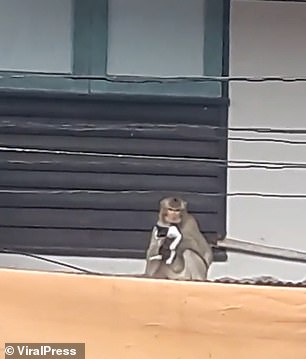 Shocked locals noticed the 'cat-napping' and called for the monkey to release the animal.

One woman can be heard in the video shouting 'let him go! don't hurt him!' They then shout 'cat, cat, cat' several times to try and encourage the kitten to flee its captor.

Chantra said that residents recognised the monkey as it had been terrorising locals in recent months by stealing food.

She said: 'When this happened, somebody was trying to feed the monkey with food. But it didn't just take the food, it also took the cat. 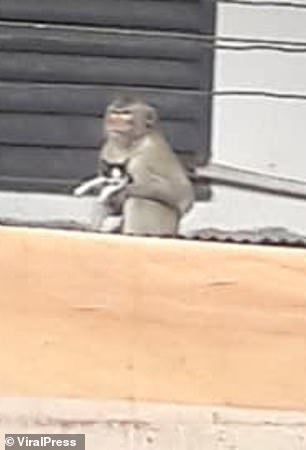 'It grabbed the kitten then ran away. People tried to tell him to give the cat back but it wouldn't let him go.'

Neighbours said that they called the local rescue team then left the monkey on the roof after night fall.

Animal handlers arrived the next morning but there was no sign of the monkey or the cat.

Residents are keeping a look out for the cat in to treat it if it has been injured during the ordeal.