Paxex Forum / General / News / 'Gang riot' caught on video: The shocking moment an SUV rams a BMW and leaves the woman inside screaming for help after yobs with baseball bats invaded Yorkshire suburb

'Gang riot' caught on video: The shocking moment an SUV rams a BMW and leaves the woman inside screaming for help after yobs with baseball bats invaded Yorkshire suburb

This is the spine-chilling moment a 4x4 driver rams into a BMW - leaving a woman apparently trapped against a tree during a street fracas.

The terrifying attack happened on Fir Parade in the Ravensthorpe area of Dewsbury, West Yorkshire, at about 2am today.

An eyewitness said it was like a 'riot' with cars rammed, houses smashed and people carrying bats.

Three people were taken to hospital following the incident. Video footage captures the moment the grey Jeep smashes into the BMW.

A woman's blood-curdling screams can be heard as the Jeep rams the car and a tree is seen to move backwards.

A red car swerves around the Jeep as it speeds away. A witness, who did not want to be named, said: 'At about 2am we heard a big noise like somebody was smashing windows. 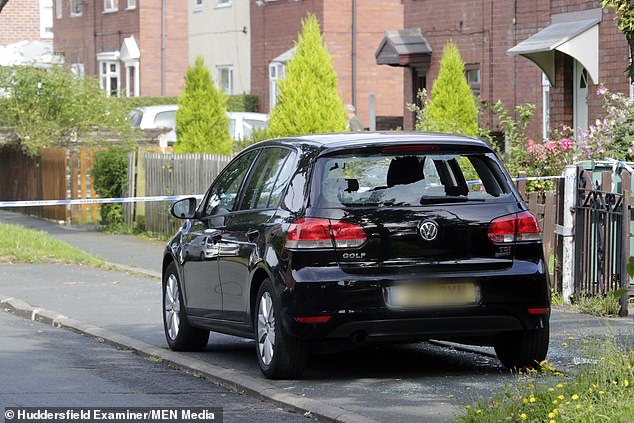 'It's summer time so all the windows were open so everyone heard. There was a big gang - I'd say about 20 people - carrying bats and they were smashing the white BMW and two or three other cars.'

The witness's son added: 'It wasn't specific, more like a riot. But they smashed the windows of a house.

'We woke up and there was a grey Jeep ramming the white BMW.

'She was screaming and somebody was shouting ''keep ramming!''

'It looked like she had her foot trapped under the car. 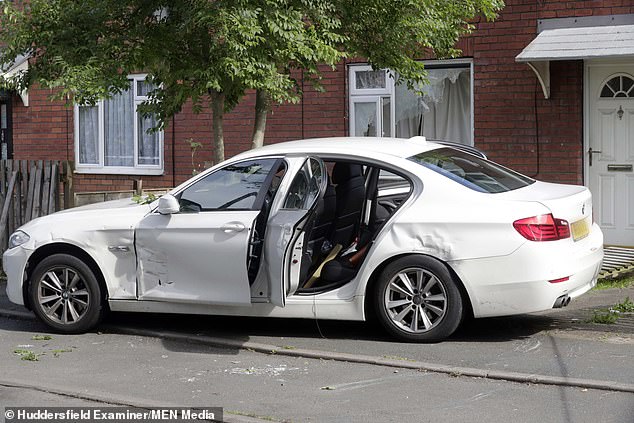 'After that they just left and people in the street came out. The police came but just asked a few questions and left.'

A section of the street has been sealed off and damaged cars are still parked within the cordon.

A relative of the three injured people said: 'At 2.50am I received a phone call from one of my sisters-in-law in Fir Parade who was very distressed.

'These men had smashed all her windows up and the front door too. My 17-year-old daughter, my sister-in-law, and another relative all needed hospital treatment.

'We went over there and came back to my home. Unfortunately we left the electric gate open when we left and they smashed windows at our home.'

He said he had 'no idea' why his sister-in-law had been targeted.