PHILADELPHIA — A suspect surrendered just after midnight after shooting six police officers in a north Philadelphia neighborhood on Wednesday evening, igniting a standoff that dragged on for hours in what authorities called a hostage situation.

The suspect is Maurice Hill, a 36-year-old Philadelphia resident with a history of gun convictions, his former lawyer, Shaka Johnson, told The Washington Post. Philadelphia Police Sgt. Eric Gripp confirmed on Twitterearly Thursday that the suspect is in custody.

Johnson did not know Hill’s motive for the alleged shooting and standoff, he told CBS Philly. He credited police for ending the situation, adding that the suspect would likely face several charges from the Philadelphia District Attorney’s Office, including attempted murder and aggravated assault.

Philadelphia Police Commissioner Richard Ross said he was surprised that the suspect surrendered, telling reporters at a news conference Thursday morning that Hill “was indicating to some that he was not going to do that.” Ross said that the tear gas shot into the home ultimately resulted in the suspect ending the standoff.

“This was a very dynamic situation, one that I hope we never see again,” he said, adding that he was thankful no civilians or police officers were seriously injured.

The suspect walked out of the house with his arms raised in the air as local TV crews filmed the scene. Police could be heard saying, “Hands up! Hands up! Get down! Get down!”

Hill was not cooperating with police as of early Thursday, Ross told reporters. He said Johnson, Hill’s lawyer, came to the house toward the end of the standoff and talked with his client.

“Using him was unorthodox,” Ross said of the lawyer’s involvement in ending the standoff. “But again, it was a very unusual circumstance.”

Gunfire first broke out around 4:30 p.m., Ross said, after officers attempted to serve a narcotics warrant “that went awry almost immediately.” Once they were inside the home, a barrage of bullets forced officers to return fire and retreat through windows and doors.

More than three hours after the first shots rang out, police were still locked in a dangerous standoff with at least one gunman barricaded inside the home, trading shots with officers outside. Residents, forced to dive behind cars and hide in their homes, described the scene like a war zone: Bullets flew through the streets and wafts of gunpowder filled the air.

As the sun set, Ross said at a news conference he was concerned about two officers in the house with the gunman. They were there for hours until a SWAT team evacuated them, but, he said, the gunman remained inside with no intention of surrendering.

Alisha Bogan, who lives around the corner from where the standoff took place, said she was on her way home to her daughter and mother when she heard gunshots.

“There were a whole lot of people running,” Bogan told The Washington Post. As the gunfire continued, she took cover under a car. Then, she tried to get to her house and her family, but couldn’t get past the police caution tape. Dozens of frustrated residents faced the same dilemma, unable to get to their homes. They gathered on the sidewalks and streets late Wednesday night as storms passed through the region.

After the two officers made it out of the house, Ross told reporters, “We’ve gone from a hostage situation to a barricade.” He said police were still trying to talk the shooter into surrendering. Late Wednesday night, the suspect was still inside.

Dramatic live footage from media helicopters showed scores of officers swarming the house in the residential Nicetown-Tioga neighborhood. They crouched behind cars and exchanged fire with someone inside the house.

On the ground, television reporters’ microphones picked up sounds of gunshots. Multiple officers were seen being carried into police vehicles and transported away from the scene.

A bullet grazed an officer’s heads, Ross told reporters. Others were shot in the arm and elsewhere, he said.

“Nothing short of astounding that in such of a confined space we didn’t have more of a tragedy than we did,” Ross said. 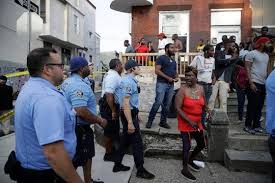 They were released from hospitals later that night, but another officer was still being treated for injuries sustained in a car crash related to the incident.

We’re thankful — a little angry about someone having all that weaponry and all that firepower — but we’ll get to that another day,” he said at the news conference. “It’s about the officers and their families right now.”