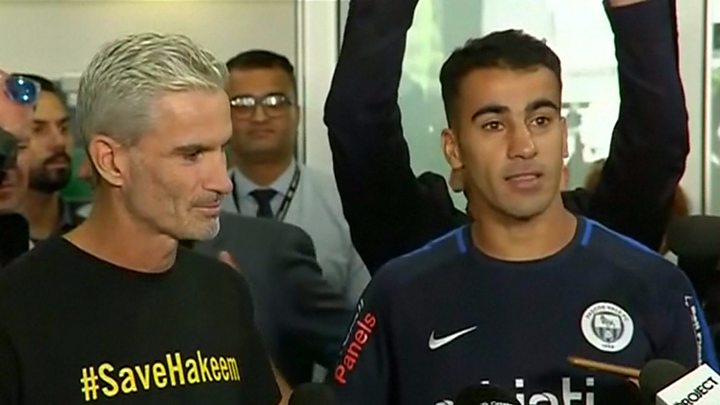 Refugee footballer Hakeem al-Araibi has returned home to Australia after two months of detention in Thailand.

The Bahraini citizen was detained in Bangkok in November while on honeymoon, at the request of Bahrain authorities.

Hundreds of supporters cheered the arrival of the 25-year-old footballer at Melbourne Airport on Tuesday.

Wearing his team's football jersey, al-Araibi told the crowd: "I would like to say thanks to Australia. It's amazing to see all of the people here and all of the Australian people who supported me."

The professional footballer and vocal critic of Bahrain authorities had fled to Australia in 2014 where he was granted political asylum.

Bahrain had sentenced him in absentia to 10 years for vandalising a police station, charges which he has denied.

The Arab kingdom had sought his extradition, but human rights groups warned that he risked torture if he was sent back.

Hours before his return, his wife told the BBC she was deeply thankful for the lobbying efforts of the Australian government and public, and the international football community.

"I have had a smile all the time on my face and I can't stop crying - I am just so happy," said the 24-year-old, who does not wish to be named.

"I prayed and prayed that he would come back to me, and finally our nightmare is ending." 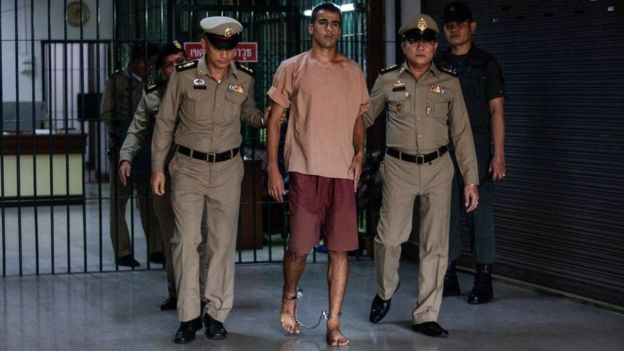 Denied contact with her husband during his 10-week detention, she said she planned to "buy flowers and cake" to celebrate their reunion.

Mr Foster, who escorted al-Araibi on his arrival, said the human rights victory marked "the beginning of a broader fight for the values of sport".

"We fought for one soul because Hakeem represented everyone who suffers under tyranny," he said in a statement.

The footballer plays for Melbourne team Pascoe Vale FC. Many of the team's members were at the airport on Tuesday. 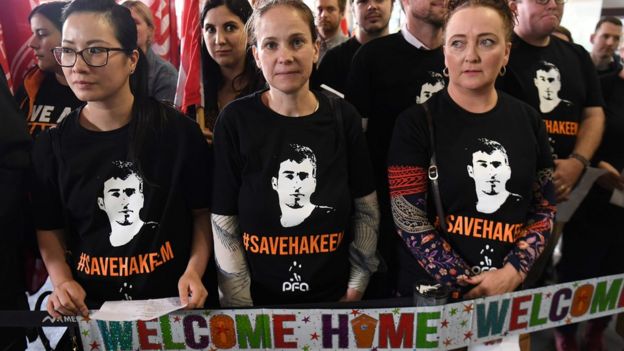 As he walked out of the airport arrival gates, Hakeem al-Araibi seemed astounded by the welcoming party that had gathered to greet him.

Some supporters had banners and posters baring his picture, others wore T-shirts with the campaign slogan #SaveHakeem.

They cheered as if greeting a cup-winning captain and sang one of football's most poignant anthems, You'll Never Walk Alone.

His case has shown the solidarity that exists across the game, as players and fans lobbied for his return.

But the apparent delay by Fifa in becoming involved has left the game's governing body open to accusations of neglect and failing to stand by its own policy on human rights.

On Monday, Thai officials told the BBC they had released al-Araibi because Bahrain was no longer seeking his extradition.

"The Kingdom of Bahrain reaffirms its right to pursue all necessary legal actions against Mr al-Araibi," it added.