I never met my daughter's dad - she was his dying wish

Liat Malka longed to have children but hadn't yet met the right person with whom to start a family. Then she became involved in an unusual plan - to help fulfil a stranger's dying wish of fathering a child.

In 2013, Liat Malka was a single, 35-year-old kindergarten teacher living in southern Israel, when she felt the urgency of her biological clock ticking.

"I was worrying about time passing and maybe missing out on motherhood," Liat says. "So I went to the doctor and did some fertility tests."

When the results came back, they suggested that the number of eggs Liat had left was low. The doctor warned that if she waited for the right person to come along she might not ever become a mother.

"So right away I decided that I would do anything I could to have a baby as soon as possible," Liat says.

When Liat arrived home, she immediately went online to explore her options.

"I really wanted my child to know their father and that's not possible with a sperm donor," she says. "And just having somebody to have a child with is also very complicated."

But then Liat stumbled across an interview on YouTube that had been broadcast on TV news in 2009. In it, a couple called Vlad and Julia Pozniansky explained that they were trying to obtain legal permission to have a child using sperm left by their son, who had died the previous year. They had already found a woman to be the mother of their son's child.

Liat wondered if a similar arrangement might also be a good option for her: "Because this way the child can know who their father was, know their history and have grandparents and family," she says.

She decided to contact the couple's lawyer to ask for more details - and was surprised to learn that although four years had passed since the interview had been recorded, Vlad and Julia still didn't have a grandchild and the woman selected to be the mother was no longer on board.

Liat arranged to meet the Poznianskys and on the day of the meeting the couple brought with them an album filled with photographs of their beloved son, Baruch. 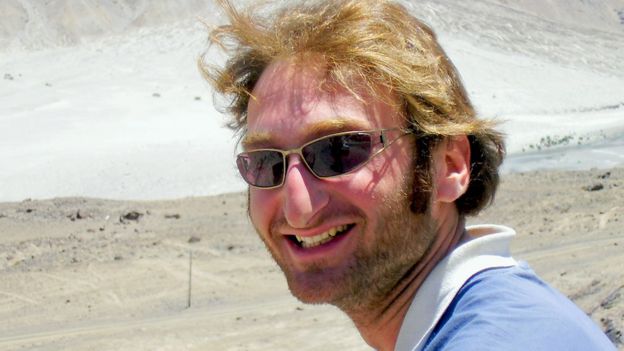 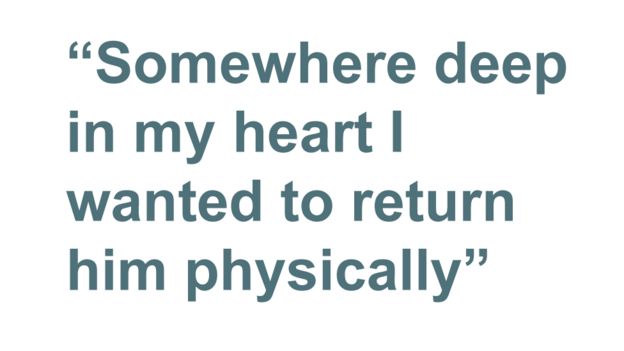 Eventually Vlad and Julia found an Israeli woman of Russian origin who they thought could be a mother to their grandchild. They went to court to obtain permission to use Baruch's sperm and won their case, but within a week or two the woman had met a new partner and withdrawn from their agreement.

"Another young woman came to us, a very nice one," Julia says. The woman's name was added to the court verdict, instead of the first woman, and she began the IVF process. But after seven rounds the woman had failed to conceive, leaving the finite supply of Baruch's sperm depleted.

Somehow, in spite of the devastation Julia felt after losing her son and the failures and disappointments on her journey to try to have Baruch's child, she found the determination to keep going.

"I was ready not to live any more," she says. "But I decided that if I was going to live I had to return some happiness to my life, and some love.

"I wanted my son to continue living - somewhere deep in my heart I wanted to return him physically - I thought maybe a boy would be born who would look like Baruch."

Uncertain how long it might take or if she'd ever be able to fulfil Baruch's dying wish, Julia was longing for a baby in her life. At the age of 55, she and Vlad started trying for a child of their own using IVF and a donor egg.

When their son was born, Julia says it felt like breathing fresh air again.

Julia clearly remembers the day that she and her husband first met Liat in early 2013.

"She was a beautiful young woman. Black hair, red coat, and I loved her from the very beginning," Julia says. "I saw that she was a good person."

She showed Liat the album of photos of Baruch that she'd brought with her and Liat says she felt an immediate connection to him.

"Just looking at the pictures I already knew who this person was - such good eyes, the biggest smile you can ever imagine, surrounded with friends and very handsome," she says. 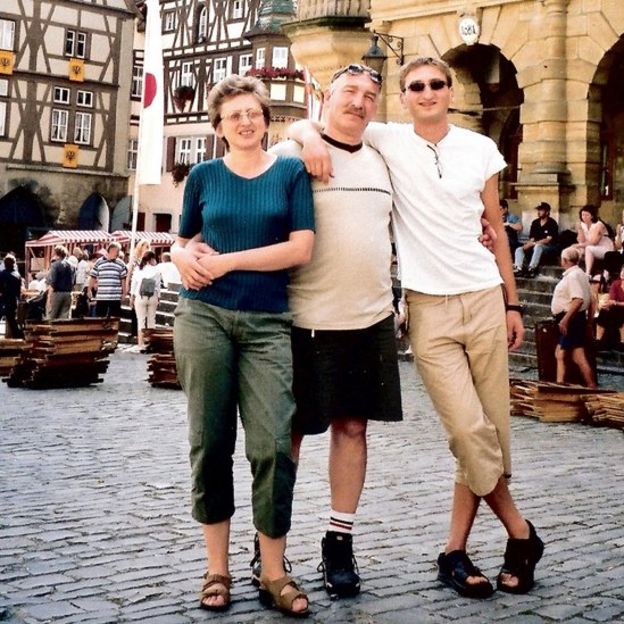 "And it looked like he was really connected to his parents, because in every picture they are holding hands and hugging. I could see the love and the happiness in his eyes - there was no doubt he was a great person."

As Julia showed Liat the photos, she talked about how much Baruch had loved life, how smart he was, and how sociable, how he'd loved cooking and what great friends he'd had.

In that moment Liat decided that she wanted Baruch, a man she had never met and who had died five years previously, to be the father of her child.

Liat, Vlad and Julia signed contracts which gave Liat ownership of the sperm so that nobody else could use it subsequently, and the contract also formalised arrangements for Vlad and Julia to visit.

"To protect our rights to see the child," Julia explains. "We were doing it not only to fulfil Baruch's will, but also to have a dear, beloved grandchild."

No money changed hands - something that was very important to Vlad and Julia, in order to prevent attracting the wrong type of person.

Julia and Liat then had to meet a social worker who questioned them about what conflicts they anticipated in their relationship and even about what would happen if they quarrelled over what the child would be named. Julia felt as though the whole judicial system was playing God, deciding if a human being would live or not, and she told the social worker as much.

"And this nice woman felt really uncomfortable with my answer," she says.

Liat then began fertility treatment, but her first round of IVF was unsuccessful.

"There was just one egg," Liat says. "That was a shock - I expected more - and then it didn't develop to be an embryo." 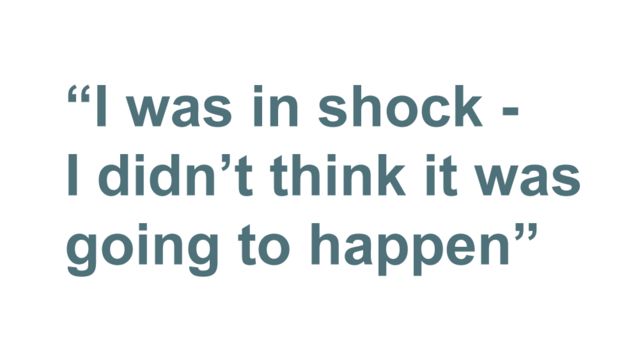 Liat tried to remain hopeful, but despite being given an increased dose of the medication which encourages the ovaries to produce more eggs, on the second attempt again there was only one egg.

"They fertilised it and I had to wait for a day and then call to find out if it was developing into an embryo," Liat says.

This time there was good news.

The fertilised egg was transferred into Liat's womb. For a week she rested, waited and hoped, then took a pregnancy test and called the hospital for the results.

"They were yelling like, 'Yeah, you're pregnant!'" Liat says.

Liat shared the exciting news first with her sister and then with Julia. Then, over the following few days, the seriousness of her situation began to sink in.

"I was in shock - I didn't think it was going to happen," Liat admits. "So when it did I just couldn't believe it. I didn't even know Vlad and Julia that much - I'd only met them two or maybe three times."

Liat was worried about how her own family would get along with Baruch's family - her parents had come to Israel from Morocco, while Vlad and Julia come from Russia, and, she says, the two families are culturally very different.

To compound her doubts, Liat had also not yet told her own mother about meeting Vlad and Julia and the plan to become a mother to their dead son's child.

"I didn't want the burden of everyone's opinions, especially my mum's, so I had kept it a secret," she says. "But when I called her to say I was pregnant she was happy - at least I was having a child!"

Liat's pregnancy progressed but her doubts didn't diminish. She was very stressed and couldn't cope with trying to forge a relationship with Vlad and Julia while trying to grow a baby. At night she would dream about how her child might look.

Julia, too, was worried. She wanted to be closer to Liat, but had to respect Liat's wishes and keep her distance.

"I spoke to one of my relatives, a very wise woman, and she said, 'Let her have her child and afterwards everything will be OK,'" Julia says. 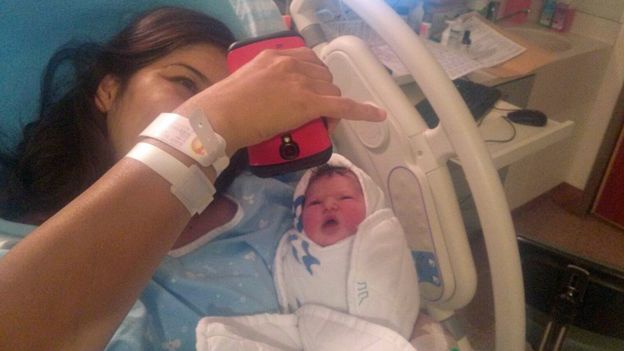 When Liat went into labour she didn't feel comfortable about calling Julia to share the news, and told her own mother not to come to the hospital that evening since a doctor had advised her it was unlikely the baby would arrive before morning.

"But at midnight she had a feeling, took a taxi and arrived at the hospital at the last minute," Liat says. "I was very happy that she came. She was in so much shock that she couldn't even speak. My two sisters were with me too, and I have a sister in the US who was on Skype and we put her on the shelf. It was a really amazing experience."

Shira was born on 1 December 2015, more than seven years after her father had died.

"She was exactly like she was in the dream," Liat says. "She was so beautiful, I really couldn't believe it."

Liat called Vlad and Julia to tell them the news.

"I felt that my heart started to beat again for the first time after my terrible loss," Julia says. 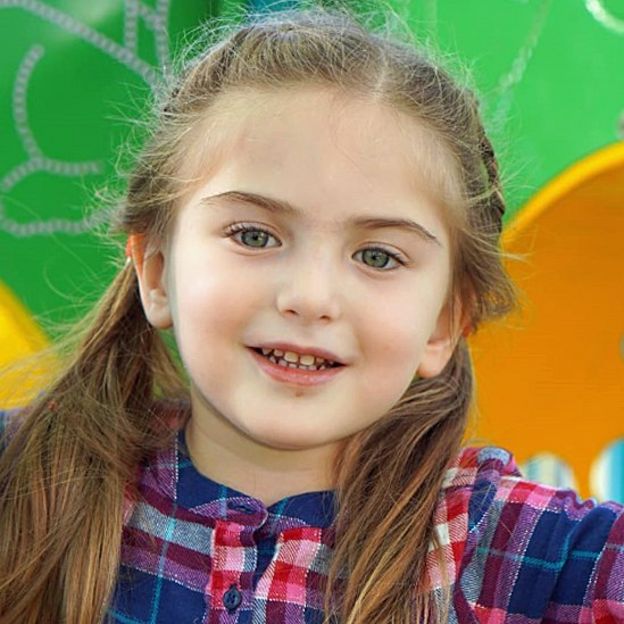 The photos of Baruch that Julia brought when she first met Liat are now kept at Liat and Shira's apartment in Ashkelon, and they often look at them together, talking about the man in the photos who is smiling back at them. Liat points out Baruch's blue eyes, just like Shira's.

Shira is now aged three. Her mother says she does sometimes worry about Shira not having a father. 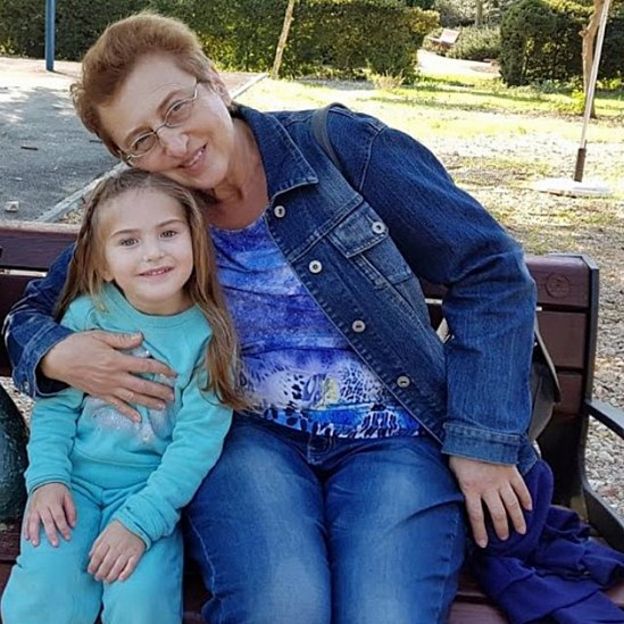 "But today you have so many kinds of families," Liat says, "This is just another one. Shira knows that she does not have a father, but she's very loved and she's very happy."

And having fulfilled her dying son's last wish, Julia has no doubts about what she has done, and feels certain that Baruch would love his daughter too. 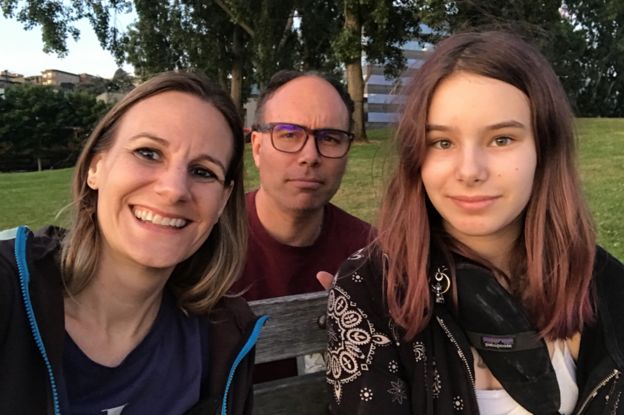 When Jessica Share bought sperm from a sperm bank in order to start a family, she never imagined that more than a decade later she would meet the donor - and would feel a strong attraction to him.