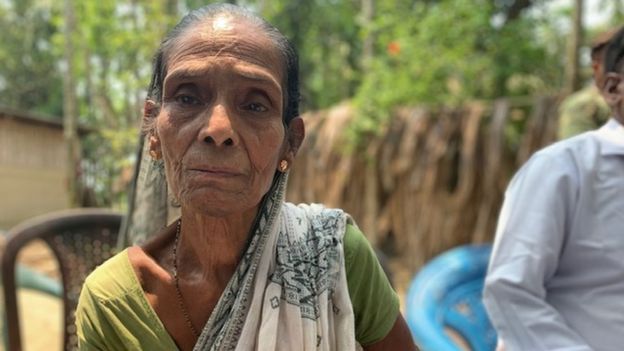 In total some four million people who thought they were Indian were excluded from the draft list. Half of these people have filed claims to be included in the final census.

Vinay could not handle the stress of the uncertainty, Shanti says, and took his own life in May 2018. As she mourns her son, Shanti now worries about her own status if she is left off the finalised list.

"Where shall I go and why should I flee?" she says. "It would be better that I too should die. Nobody is helping us. We are poor and weak people. The government should help us."

Mr Modi's Hindu nationalist Bharatiya Janata Party (BJP) has long railed against illegal immigration in India but has made the NRC a priority in recent years.

Local officials say the list has nothing to do with religion, but activists see it as targeting the state's Bengali community, a large portion of whom are Muslims. Their fears are set against rhetoric from a Hindu nationalist government whose leader has not hidden his preference for Hindu migrants over Muslim ones.

However significant numbers of Bengali-speaking Hindus have also been left off the citizenship list, underscoring the communal and ethnic tensions in the state. For local Assamese, the NRC is about deporting all illegal immigrants - not just one religious minority - in an effort to preserve their culture.

The question of identity is one echoed 13,000km (8,000 miles) away in the US, where a similar resurgence of nationalism has emerged under Mr Trump, the Republican president whose inflammatory rhetoric has stoked anti-immigration fears along the US-Mexico border and divided Americans on national identity.

"While Trump is building his physical wall, Modi is creating a figurative one through policies like the NRC," says Milan Vaishnav, director of the South Asia programme at the Carnegie Endowment for International Peace,

Though Mr Modi came to power two years before Mr Trump, the resurgence of his party's unbridled religious nationalism has come to define this year's election, and the struggle for India's identity as a pluralistic democracy. 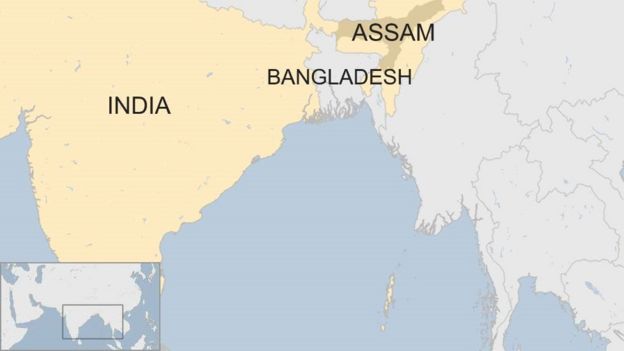 'Infiltrators at the border'

BJP politicians have pointed to the NRC to amplify the threat of Muslim "infiltrators", while showing that they are curbing the tide of undocumented immigrants at India's borders.

The party has suggested that such citizens registers could be drawn up across the country.

"These infiltrators are eating away at our country like termites," BJP President Amit Shah said during rallies on 11 April in West Bengal. "The NRC is our means of removing them."

Mr Shah's anti-immigration rhetoric is similar to that of Mr Trump, who has been accused of fear-mongering, describing migrants from Central America as killers and criminals who threaten US security.

The US president has made a crackdown on America's 11 million undocumented immigrants a rallying cry in his 2020 re-election campaign. He continues to push hardline immigration policy, toughening requirements for asylum seekers and, more recently, proposing a reduction to America's family-based admissions system.

But while Mr Trump has indicated his plans to return undocumented immigrants to their countries, the future of people seen as illegal foreigners in India is less clear.

Once the final list is published, residents whose appeals have been denied will be stripped of their citizenship, forcing their deportation or leaving them stateless.

Vijay Kumar Gupta, a senior BJP leader in Assam, told the BBC the process was about separating migrants who fled religious persecution from those who sought economic relief, "damaging Assamese heritage".

He suggested the government would evict those deemed illegal foreigners, but Bangladesh has rejected claims that any of its citizens reside in Assam illegally, calling the NRC a "local internal matter".

Michael Kugelman, deputy director of the Asia Program at the Wilson Center, points out Mr Modi's emphasis on nationalism in this election fits with the broader global trend of populist leaders using polarising rhetoric across Asia, Europe, the US and South America.

While nationalism is not a new sentiment in India, he notes, what's happening under Mr Modi has striking similarities to the political landscape in Mr Trump's America.

Mr Kugelman says the parallels extend to the cult personalities of the two men, both considered "straight shooters" who push conservative politics, have deep business interests and are perceived as hostile toward their country's media - while also embracing social media. 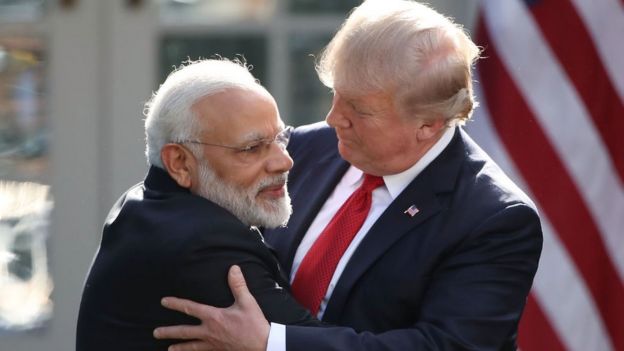 "There has always been these tensions festering underneath this veneer of India as a secular, pluralistic state, between those that think it's true and should continue to be a secular state, and those that think India is above all a Hindu state, and that identity should be promoted as much as possible," Mr Kugelman says,

Those in the latter camp have been emboldened under Mr Modi's leadership, he adds, much like the growing tenor of anti-immigrant sentiment under Mr Trump in the last two years.

Both leaders have used national identity as a crude political tactic on the campaign trail, catering to a constituency feeling threatened by diversity and minority interests.

Are Muslims being targeted?

Assam's Muslim population, about one in three residents, fear the NRC is being used as a device to deport them from India.

"The BJP is trying to divide society, and if they continue to do it, it will destroy the Indian identity," says Azizur Rahman, president of All Assam's Minority Student Union, a group advocating on behalf of those left off the NRC. "If they win, the next five years will be very tough for Muslims, and will be for decades to come."

During the drafting process, residents have been able to challenge the citizenship of names included on the NRC, and some critics say those complaints have largely been directed at Muslims.

"What was a process to segregate foreigners has so clearly become an anti-Muslim exercise," says Aman Wadud, a human rights lawyer based in Assam.

Mr Gupta of the BJP strongly denied the NRC was being used as a means to target Muslims, saying that Mr Modi's government worked on behalf of all Indians. 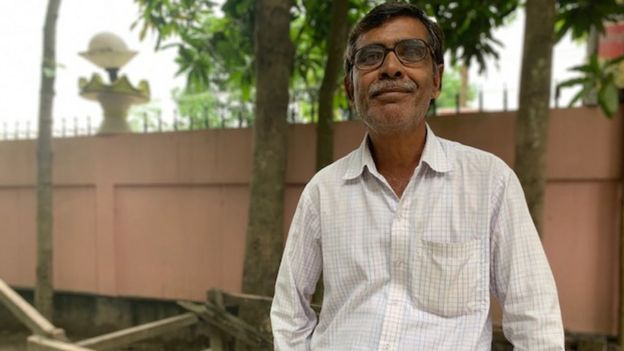 Ahmed Hussain, a science teacher at a government school in the village of Adabari, fears his family is among those ensnared in citizenship complications because of his name.

"These types of problems against Muslims increased in Assam after the BJP formed the government in 2016."

The 55-year-old teacher comes from a family that has lived for nine generations in the Assamese district of Dhubri, which sits next to the border with Bangladesh, nestled between pond-soaked fields, lush with water hyacinth, and the Brahmaputra river with its countless channels.

Ahmed claims his father was involved in preparing the original NRC while serving in the Dhubri District Commissioner office in 1951, yet his family's Indian roots have been thrown into doubt over a complaint against his 18-year-old niece Nazia's inclusion on the list.

The science student has just completed her studies in Guwahati, some 260km (160 miles) away from her hometown, with plans to become a medical doctor. But instead of studying, Nazia spends her time fighting the case against her, which implicates her entire family.

"I'm afraid for my future, my ability to find a job if I'm not declared an Indian citizen," she says. "If I apply for a government job, will they target me for my Muslim identity? Why only us?" 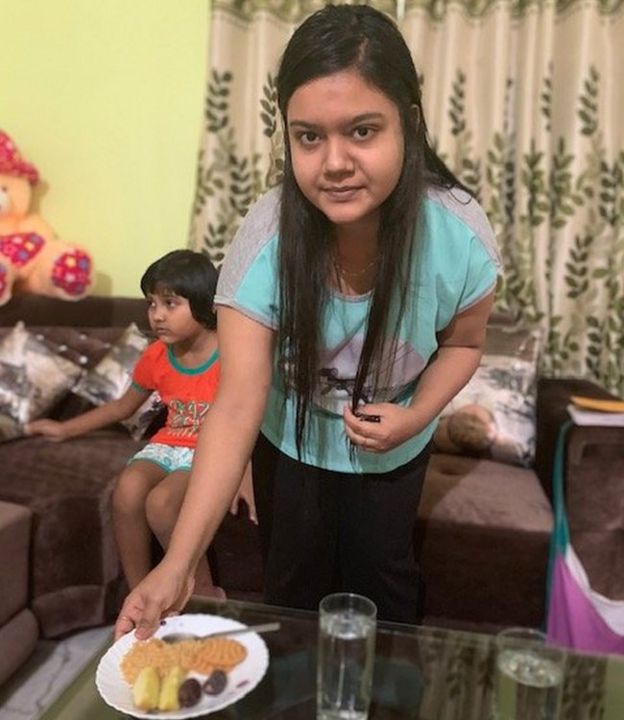 Among those lodging complaints against citizens are members of the All Assam Students Union (AASU), which has been a driving force behind the completion of the NRC and the anti-immigration movement since its inception.

AASU general secretary Lurinjyoti Gogoi acknowledges his members are filing complaints against citizens they believe come from "suspected areas", but blames NRC officials for any errors on the list.

"We want a foreigner-free NRC list. This is a one-time exercise," he declares, adding that if some Indian citizens are forced to endure legal difficulties, it is in the interest of the Assamese people.

The battle for India's soul

Last year the BJP government introduced the Citizenship Amendment Bill (CAB), legislation aimed at granting citizenship to religious minorities fleeing persecution from neighbouring Pakistan, Afghanistan and Bangladesh. It pointedly excluded Muslims, who the BJP contends do not count as a minority group.

The fact that the central government was keen to welcome Hindus, Christians, Sikhs, Buddhists, Jains and Parsis with no ties to the country while Assam's Muslims continued to fight for their right to stay in India angered many in the state and sparked violent protests.

Opponents of the legislation argued it violated India's constitution by establishing religion as a requirement for citizenship.

The BJP eventually soft-pedalled on the legislation, but if the party returns to power it may renew its efforts to push the legislation through India's parliament.

"Given the toxicity in politics and the nasty things that have been said and done, the discriminatory rhetoric and policies that we've had for the last two years in India and the United States, it's going to take a long time for both of these countries to recover."

While millions in Assam await the finalised NRC in July, which will determine whether they are accepted as Indian, the rest of the country will decide on 23 May if they agree with the BJP's conception of what that means.

Speaking at a rally in Mumbai in April, Mr Modi told the crowd: "This election is not just for choosing a government, it is an election to decide the direction of India."