The CEO of Rappler, a news website critical of the government in the Philippines, has been arrested at its headquarters in Manila.

Maria Ressa said the accusation of "cyber-libel" is an attempt by Rodrigo Duterte's government to silence the publication.

It is the latest in a string of different allegations against her.

The president, who calls the site "fake news", has previously denied charges against her are politically motivated.

Footage streamed on Facebook showed plain-clothes party officials speaking with Maria Ressa, while several of the site's journalists live-tweeted what was happening.

Officers from the National Bureau of Investigations (NBI) reportedly ordered them to stop filming and taking photos.

Chay Hofileña, Rappler's head of investigative journalism, told BBC News that their main concern was making sure Ms Ressa did not have to spend the night in jail.

"Maria is currently at the National Bureau of Investigations, and we're hoping that she'll be able to file bail tonight, so that she won't have to spend the night there," she said.

"We will have to find a judge at a night court who will be willing to grant bail. Our lawyers are currently in the process of finding one."

Ms Hofileña added that "if she's able to post bail, then she's free" and they could focus on their case and the legal process.

Journalists must "hold the line" against government attacks, that's what Maria Ressa told me when I interviewed her recently about press freedom in the Philippines.

She says politically-motivated legal cases and online troll attacks are being used to try to "bludgeon the media into silence".

Journalists, including myself, have been at the sharp end of numerous threats by supporters of President Rodrigo Duterte.

One post under a Facebook link to a documentary about the president read: "Howard, watch your back". Next to it was a skull and cross bones emoji.

The president's supporters accuse Rappler and other news organisations of being biased against him.

They say too much attention is paid to his bloody drug war and not enough to his other achievements while in office.

But with Time magazine awarding Maria Ressa Person of the Year 2018 for her journalism, the world's eyes will be on the Philippine justice system to see which way it rules.

The latest charge against Ms Ressa stems from a seven-year-old report on a businessman's alleged ties to a former judge in the Philippines' top court.

The case comes under a controversial "cyber-libel" law, which came into force in September 2012, four months after the article in question was published.

Officials first filed the case against her in 2017, but it was initially dismissed by the NBI because the one-year limit for bringing libel cases had lapsed. However, in March 2018, the NBI reopened the case.

If she is convicted of just one count of tax fraud, she could serve up to a decade in prison. The cyber-libel charge carries a maximum sentence of 12 years.

Speaking to reporters after her arrest, the veteran journalist said she was "shocked that the rule of law has been broken to a point that I can't see it".

Rappler was founded in 2012 by Ms Ressa and three other journalists.

Since then it has become known in the Philippines for its hard-hitting investigations.

It is also one of the few media organisations in the country that is openly critical of President Duterte, regularly interrogating the accuracy of his public statements and criticising his sometimes deadly policies.

In particular, Rappler has published a number of reports critical of Mr Duterte's war on drugs, in which police say around 5,000 people have been killed in the last three years. In December, it also reported on his public admission that he sexually assaulted a maid.

The president insists that the site's reporting is "fake news", and has banned its reporters from covering his official activities. Last year, the state revoked the site's licence - but Mr Duterte denied that the claims against Rappler and Ms Ressa are politically motivated. 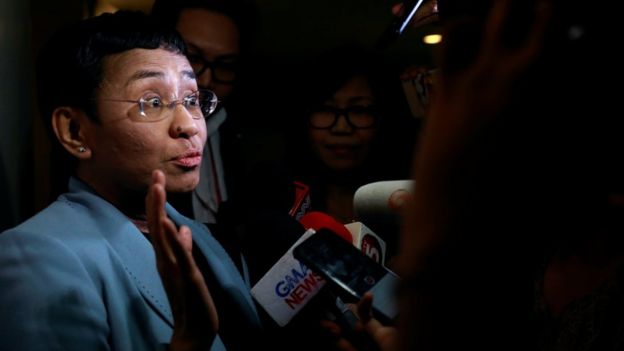 Ms Ressa says the arrest is an attempt to silence Rappler's journalism.

Ms Ressa is a veteran Philippine journalist who, before founding Rappler, spent most of her career with CNN - first as the bureau chief in Manila, and then in Jakarta. She was also the US broadcaster's lead investigative reporter on terrorism in Southeast Asia.

She has won many international awards for her reporting, and was named a Time Magazine Person of the Year in 2018 for her work holding power to account in an increasingly hostile environment.

Press freedom advocates see this as an attempt to bully a critical news organisation into silence.

The National Union of Journalists of the Philippines, for example, has been swift in its condemnation.

"The arrest of... Ressa on the clearly manipulated charge of cyber-libel is a shameless act of persecution by a bully government," the union told Reuters. "The government... now proves it will go to ridiculous lengths to forcibly silence critical media."

Meanwhile, Rappler's reporters have been tweeting about the arrest with the hashtag #DefendPressFreedom.

Observers say that press freedom in the Philippines - once one of the strongest in Asia - has been weakened under Mr Duterte's presidency.

Since 1986, 176 journalists have been killed in the country, making it one of the most dangerous in the world for reporters.