Paxex Forum / General / News / .Meet the robotic boy that breathes, bleeds and even calls for his mom

.Meet the robotic boy that breathes, bleeds and even calls for his mom

Medical students are using a robot boy to better understand how young patients respond to treatment.

Called HAL, the realistic robot can cry, bleed, talk and go into anaphylactic shock. It also has a 'pulse.'

The device was created by Gaumard Scientific, which has been creating teaching simulators for hospitals, schools and other industries since the 1940s.

Hal marks a major departure from test mannequins - and not just in price, as the unit starts at a whopping $48,000. 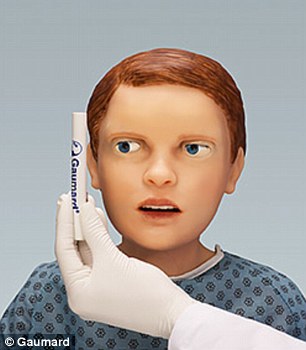 To make it mirror a real human, Guamard engineers studied actual children by looking at their facial expressions, including how their muscles moved and eyebrows furrowed, according to Wired.

The boy can shake his head from side to side, cry real tears and even call out for his mother when feeling distressed.

There's also an integrated voice simulator that turns your voice into a five-year-old's, so that it can speak custom commands or phrases.

It's made up of a mechanical-pneumatic system that creates a pulse, as well as a cartridge in the robot's leg that exhales carbon dioxide.

A hydraulic system makes him cry tears and pumps blood throughout his body.

This enables trainees to learn how to operate a glucose monitor on the robot, as pricking his finger will generate a drop of blood. 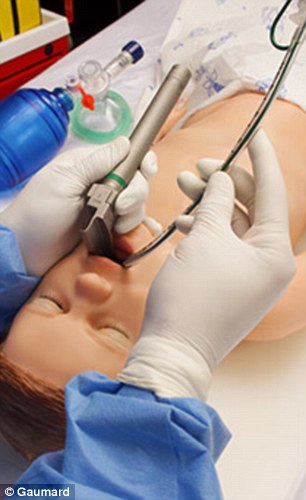 What's more, the robot can even urinate or go into cardiac arrest.

'In certain situations such as anaphylaxis, his tongue will swell, his throat will swell,' James Archetto, Gaumard's vice president, told Wired.

Trainees are able to cut an opening in Hal's throat to insert a tracheal tube, simulating the creation of another airway.

They can connect him to an EKG to monitor his 'heart' and monitor his pulse using an arm cuff, or jolt him back to consciousness with a defibrillator.

He can also mimic emotions of distress, like grimacing, crying or shouting.

Whoever is controlling the system can also amp up the intensity of his emotions to create an even more high-stress environment.

'We can amp the stress level up so high for the participants that people will cry, essentially have to drop out of the scenario,' Marc Berg, Stanford medical director, told Wired.

I do think there's a good potential that we'll see more of that emotional type response when the mannequin is so realistic.' 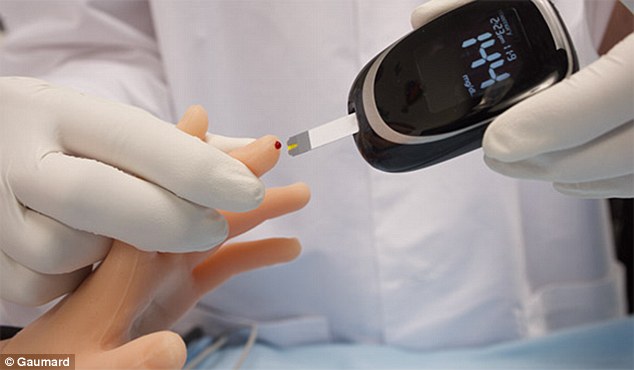 Gaumard is behind other realistic training robots like Victoria, which is a robotic woman who can give birth, as well as Super Tory, a newborn baby that helps trainees spot signs of illness in infants.

With Hal, the company had to be careful not to scare off medical students by making the boy look too real.

They avoided adding human touches like facial blemishes or freckles, otherwise it could have distracted trainees, Wired said.

'Maybe one day machines will be so sophisticated they'll be able to interpret our emotions and replicate our emotions,' Lillian Su, medical director for simulation at the Heart Center of Lucile Packard Children's Hospital, told Wired.

'But until then, we as the humans have to control that part and know how to use the machine so we can train people in that kind of environment.

'I think that's going to add an emotional layer, a challenge that we as educators have to be prepared for,' she added.