Migrant caravan to plea for entry and mercy at border

The entire migrant caravan hoping to gain access to the US and now numbering at least 6,000 people intends to walk to the border this weekend to "knock on the door" and plead for access that looks, at the very best, unlikely.

It's raised fears among the authorities in both Mexico and the US that there could be a sudden rush to jump the fence, that is being secured with barbed wire, border police and the US military.

The migrant camp was full days ago but more groups of people keep arriving, pitching tents and waiting for something to happen. Although few seem to know quite what. The facilities in the small sports complex could never have coped with this number of people and it's getting pretty miserable there now.

It's smelly, everyone is coughing, children are getting sick, it's cold and it's due to rain.

We met Leticia and her three-year-old daughter Mylene from Honduras, sleeping rough outside the camp on the street. They say it is better outside than inside the camp. 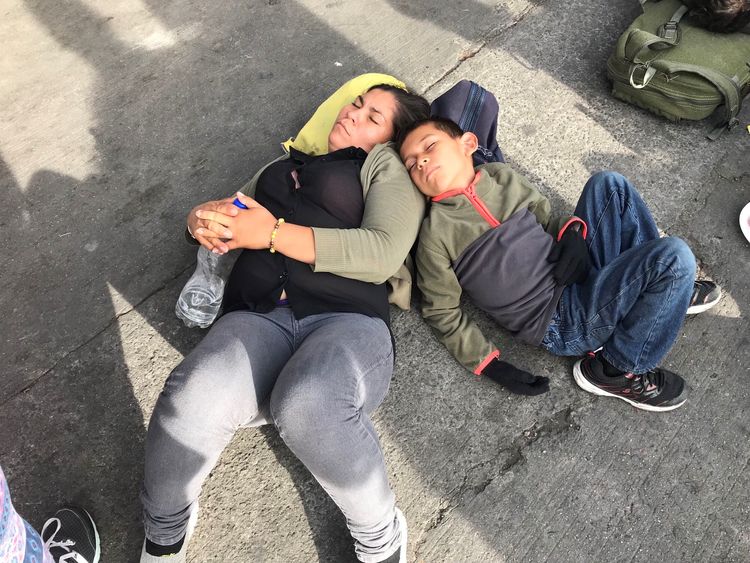 Image:Some people prefer sleeping rough because of poor conditions inside the camp

Few of the migrants appear to have joined the caravan with any knowledge of asylum law, but they are preparing banners for the march to the border on Sunday basically asking for entry and mercy.

But being poor and from a country where there is no work just doesn't qualify.

El Salvadorians stand a chance because gang violence is so bad there. Hondurans, like father of two, Carlos Xavier Ramos, sleeping on the stands of the camp's baseball park, do not. 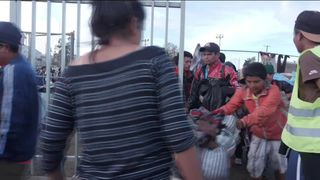 "We are waiting for what the people say, what another country may offer to us, possibly Canada, possibly Mexico," he said.

"Tijuana is a great city to work, they pay really well here. We are waiting, we are waiting for what person, what country, can offer something to us. We are waiting. All that we want to do is work."

He, like so many of the people here, are hoping some country, somewhere, could take pity and give him a chance to change his family's lives.

There have been moves to the border fence in the last few days. Hundreds sitting down outside the crossing point.

President Trump has mobilised his military and US helicopters to keep a vigilant eye from the skies. But the Mexican authorities aren't taking things easy either. Hundreds of fully clad riot police stand guard at the border and are prepared to control any sudden rush to the US.

The whole camp is hoping it can at least start the asylum process, regardless of the outcome.

Half of the caravan is made up of children. They are thousands of miles from home and sleeping rough. A little girl standing in front of the riot police looks scared and disorientated, with huge tears flowing down her cheeks.

It is miserable here and it looks likely to stay that way.