The mother of baby boy born with a tiny brain and head due to a rare condition has revealed the incredible bond between him and his sister.

Grayson Taylor was born on March 18 and was later diagnosed with microcephaly, a rare condition that can be caused by the Zika virus.

Parents Rachel, 37, and Josh Taylor, 36, claim they were reassured there was nothing to be concerned about when Grayson was born.

Doctors initially believed his squashed head was due to labour, but scans a few weeks later revealed the abnormality was for life.

The condition, of which the cause is still unknown, puts Grayson at risk of developing epilepsy, cerebral palsy, learning disabilities, and hearing loss and vision problems.

Mr and Mrs Taylor, who struggled with fertility for eight years before their first child, Cordelia, four, said the whirlwind of emotions has made bonding difficult.

However, they have been touched by Cordelia's unconditional care and love her brother, and hope people see past his disability and treat him the same way. 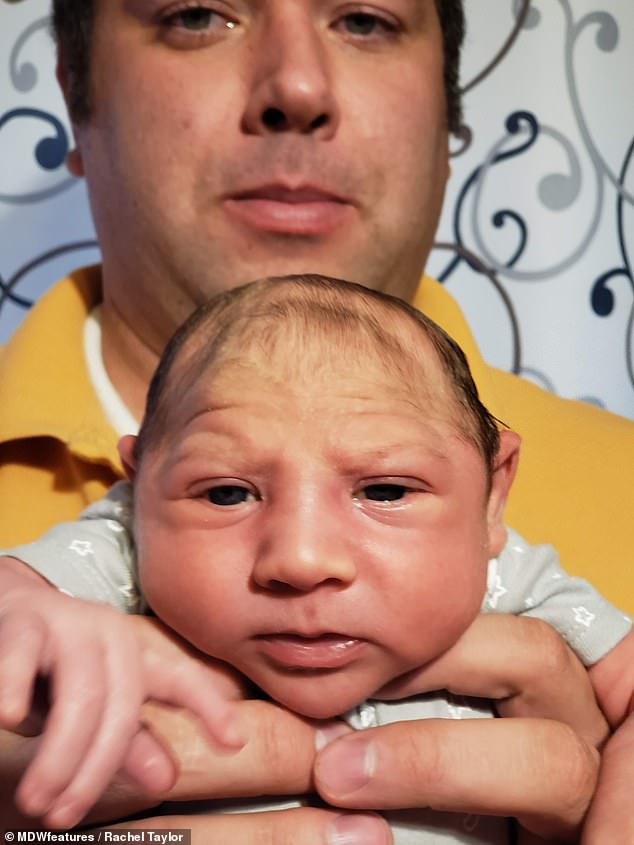 Although only four, Cordelia sees past Grayson's imperfections and has been very loving and caring towards him.

Mrs Taylor, from Provo, said: 'Cordelia was a little concerned about Grayson at first, but to her he's just her baby brother. She's gentle with him and loves him very much. She's also very proud and loves to show him off to her friends by saying "isn't he so cute?"

'She comes to check on him every morning and give him a cuddle. She feeds him his bottle when he cries, she helps by getting his bottle or diapers, and insists she's taking him to Disneyland very soon.'

Mrs Taylor, a stay-at-home mother, added: 'I encourage everyone to try and see others the way my four-year-old sees them. She sees past the way people look.

'She doesn't notice the disability or that they are different from her. She just sees how they are similar. She sees a new friend, someone to love.

'Everyone is special and amazing in their own way, and they deserve to be treated with love and respect.

'She understands how to love unconditionally. She has certainly taught me a thing or two and I truly want to be more like her in that respect.' 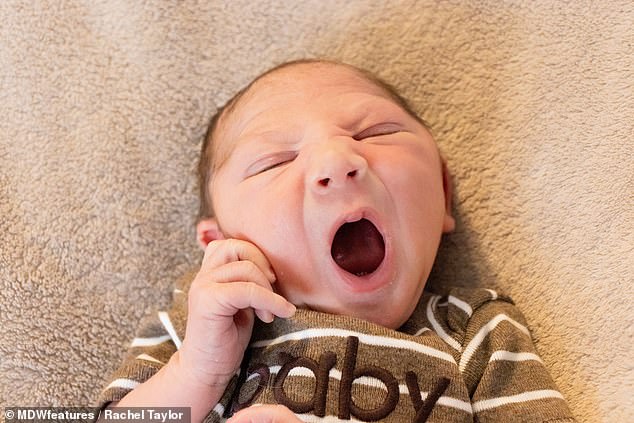 Mrs Taylor and her husband, financial analyst Mr Taylor, were married in May 2006 and were really looking forward to starting their own family.

The couple were struggling to conceive, and it took them eight years to finally become pregnant with Cordelia, during which time they tried many holistic therapies.

Mrs Taylor said: 'For the first few years, each new month would make me frustrated. I cried a lot.

'I was elated when I found out I was pregnant with Cordelia and then really surprised when I became pregnant again with Grayson.'

When Mrs Taylor gave birth to Grayson, there were complications.

The medical team noticed that he wasn't breathing properly, and they used a vacuum pump to deliver him as quickly as possible via a C-section.

Grayson's face was bruised and swollen and there was a lump on his noticeably smaller head.

However, the doctors checked for any internal bleeding and had no further concerns about his overall health, Mrs Taylor claims.

She said: 'Just before Grayson was born the doctors noticed he wasn't breathing well, and they needed to get him out ASAP. 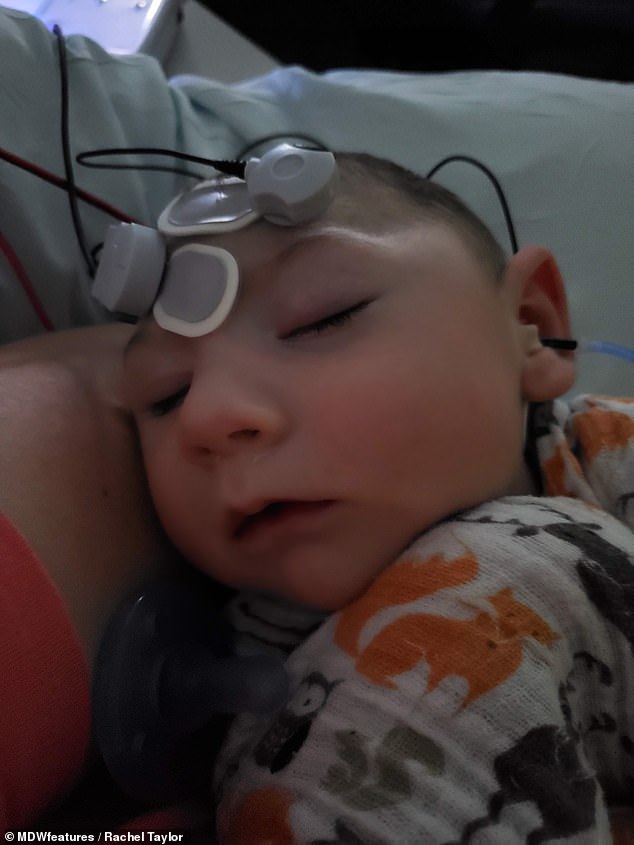 'They decided to try a vacuum pump before resorting to a c-section and that was enough. I was only in labour for 90 minutes.'

'That hour and a half had given my little boy a really hard time and the poor little fella looked really beaten up, his face was bruised and swollen, and he had a lump on his head.

'The doctors monitored him but didn't seem too concerned. This helped me feel a bit better about the swelling and bruising.

'I knew that the vacuum and even just the birthing process could make the baby's head misshapen for a little while.'

A baby's head is squashed during childbirth during the second stage of labour, when the baby leaves the uterus and is pushed through the birth canal, or when it is delivered via C-section.

At Grayson's two-week check-up, Mrs Taylor pointed out her worries about the shape of his head because it wasn't improving.

The doctor agreed his head was measuring small, and so a CT scan was performed to see if his skull was prematurely fusing, a condition called craniosynostosis, which it wasn't.

An MRI scan showed that his brain was smaller than normal, and he was diagnosed with microcephaly.

There are many potential causes of microcephaly, including infections during pregnancy, exposure to toxins in the womb, and genetic abnormalities. But often the cause remains unknown. 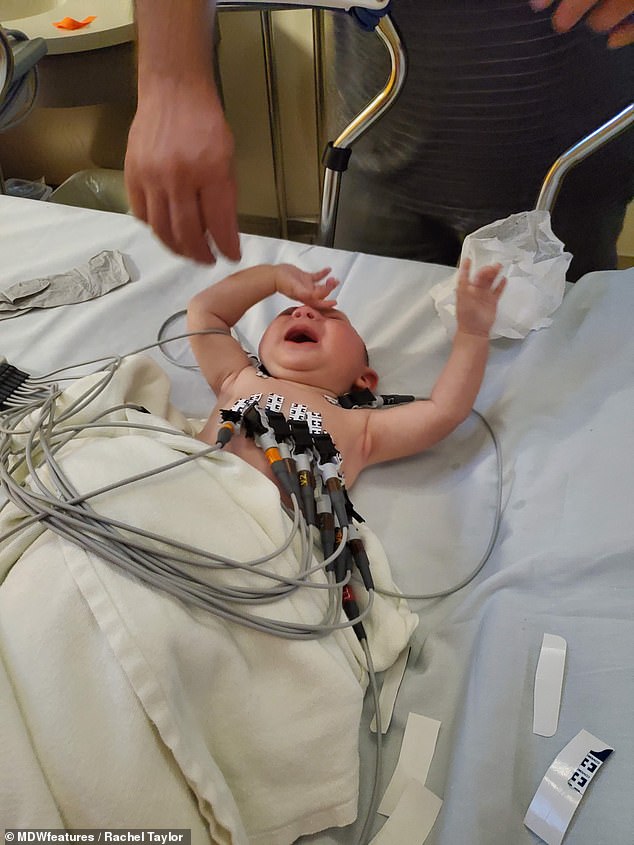 Zika virus infection during pregnancy is a cause of brain abnormalities, including microcephaly, the CDC states, after investigations of an increased number of cases of microcephaly in places of a Zika virus outbreak.

Microcephaly is estimated to affect two to 12 babies per 10,000 live births in the US, according to the CDC, and can be spotted during pregnancy or at birth. But sometimes it is diagnosed in the first few years of life.

Grayson had two auditory tests which showed moderate to severe hearing loss in his left ear, which was then normal a month later.

Ear, nose and throat specialists looked into some feeding issues, and found Grayson had silent reflux and micro aspirations that were making him cough and choke on his food.

He then started having seizures and he had a chest x-ray and an ECG to check his lungs and heart - the results came back normal.

Mrs Taylor said: 'We are currently awaiting the results of genetic testing to come back to help us determine what caused the microcephaly.'

As a loving mother, Mrs Taylor has found it difficult watching her child go through so many tests at such a young age. She hates not having any answers about the cause yet.

She said: 'It's been incredibly difficult watching my little baby go through so much testing. The MRI was the worst as he was sedated and struggled to come out of sedation.

'Being so young he doesn't understand what's going on around him. During tests we can't always be with him but can hear him crying from outside and it's just heart wrenching.'

Mrs Taylor admits that bonding with her baby son has been difficult, and keeps her guard up incase she is given the news that Grayson will be suddenly taken away from them. 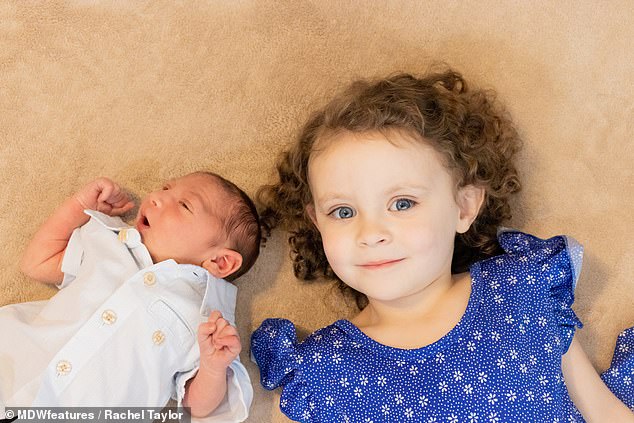 She said: 'I'm living in a whirlwind of emotions. The hardest part has been not knowing what's wrong with him. It's making bonding with my baby incredibly difficult. Much more so than with our Cordelia.

'Obviously, we have had to grieve for the life we thought we would have. We are having to find a new normal, but I keep my guard up because I'm always worried that I'll be given news that we will lose our son.'