A father accused of stabbing his eight-year-old daughter to death offered no help to police officers attempting to revive her, a court has heard.

William Billingham allegedly kicked out at an officer who was giving him first aid after he was found lying across Mylee Billingham's body.

Birmingham Crown Court heard officers entered the 55-year-old's bungalow in Brownhills, near Walsall, after finding a door key in the letterbox.

He is accused of killing his daughter who suffered a fatal knife wound to her chest at her father's home on Valley View on 20 January.

She said her colleague PC Samantha Gray saw Mylee on the kitchen floor and kicked away a blood-stained knife, which was about 10in from Mr Billingham's head.

PC Banbery, who took hold of Mr Billingham by the hoodie and dragged him off Mylee, told the jury: "I said 'what's happened?' and 'tell me what you have done'." 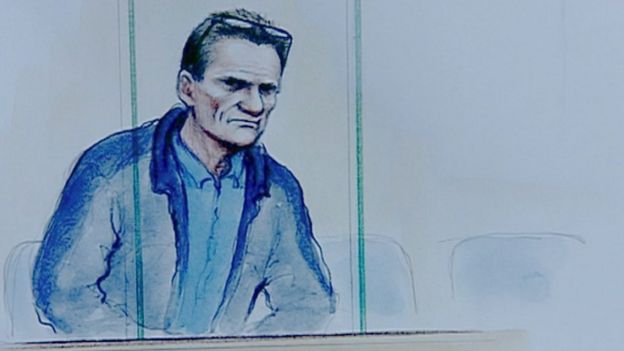 PC Banbery treated Mr Billingham while the other officer tried to revive Mylee, who was later pronounced dead in hospital.

She said: "When I was speaking to him his eyes were flickering and every so often he would open his eyes and look at me, but when he saw that I was looking back he would close them again."

PC Banbery said the father-of-six kicked out at her, and added: "When I dragged him into the living room, he then started resisting.

"He had got control over his arms and I felt that he could control his body."

Asked if Mr Billingham had tried to help officers, PC Banbery said: "He wasn't trying to assist in any way. I never heard his voice."

CCTV footage was shown to jurors of Mr Billingham and his daughter visiting a local Costcutter store about two hours before the fatal stabbing.

The defendant and Mylee entered the shop at 18:53 GMT and left shortly before 19:00.