Mysterious interstellar object could be 'lightsail' sent from another civilization

NASA may have ruled that Oumuamua, the first interstellar object ever spotted in our system is a "metallic or rocky object" approximately 400 meters (1,312 feet) in length and 40 meters (131 feet) wide, but a new study from the Harvard Smithsonian Center for Astrophysics says it could be something much more exciting – it could be "a lightsail of artificial origin" sent from another civilization.

The study, which was posted online earlier this month, suggests that Oumuamua's strange "excess acceleration" could be artificial in nature, as it has been implied that it is not an active comet.

"Considering an artificial origin, one possibility is that ‘Oumuamua is a lightsail, floating in interstellar space as a debris from an advanced technological equipment," researchers wrote in the paper.

The paper continues: "Lightsails with similar dimensions have been designed and constructed by our own civilization, including the IKAROS project and the Starshot Initiative. The lightsail technology might be abundantly used for transportation of cargos between planets or between stars."

They even theorized that Oumuamua "may be a fully operational probe sent intentionally to Earth vicinity by an alien civilization," though that scenario was called "exotic."

The paper was written by postdoctoral researcher Shmuel Bialy and professor Abraham Loeb, the director at the CfA's Institute for Theory and Computation.

Other studies have suggested that other "Oumuamua-like objects" will potentially enter our solar system, with some potentially carrying life.

"The likelihood of Galactic panspermia is strongly dependent upon the survival lifetime of the putative organisms as well as the velocity of the transporter," according to a paper published in The Astronomical Journal by Manasvi Lingam and the aforementioned Loeb.

They added: "Velocities between 10−100 km s−1 result in the highest probabilities. However, given large enough survival lifetimes, even hypervelocity objects traveling at over 1000 km s−1 have a significant chance of capture, thereby increasing the likelihood of panspermia."

Panspermia is the hypothesis that life on Earth originated from microorganisms in outer space that were carried here unintentionally by objects such as space dust, meteoroids and asteroids, according to an article on NASA's website.

Oumuamua, which is the Hawaiian name for "pathfinder" or "scout," was discovered in October 2017 by the PanSTARRS1 telescope after it spotted a new spot of light coming from a strange direction at an unusually fast speed. 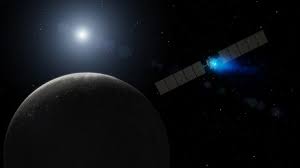 Since its discovery, researchers have debated whether it is a comet or an asteroid, though it was eventually determined to be a comet.

Oumuamua is traveling away from the Sun at a rate of approximately 70,000 mph, towards the outer part of the solar system. In approximately four years, it will whiz past Neptune's orbit, on its way to interstellar space.