A Niger national who was expelled from Israel has been stuck at the international airport in Ethiopia's capital, Addis Ababa, since November after his home country refused to take him back.

"I have been staying here at the airport under very bad conditions because there's nothing, nothing at all," 24-year-old Eissa Muhamad told the BBC.

Mr Muhamad's series of misfortunes began last April when he was arrested for being in Israel illegally.

He had been living in the Middle Eastern state since 2011, having left Niger's north-western Tilaberi region as a 16-year-old in search of a better life.

He said he paid traffickers to take him across Libya and Egypt before he entered Israel by foot.

Once in Tel Aviv, Mr Muhamad survived by doing odd jobs in hostels and in a sweet factory until April 2018 when he was arrested for being in Israel without proper documents.

After several months in detention, Israel issued him an emergency travel document and put him on an Ethiopian Airlines plane, via Addis Ababa, to Niger in November. But on arrival in Niamey, Niger's capital, he was refused entry by Niger's authorities who alleged his travel document was false.

"They didn't want me in Niger. They didn't accept me," Mr Muhamad said. 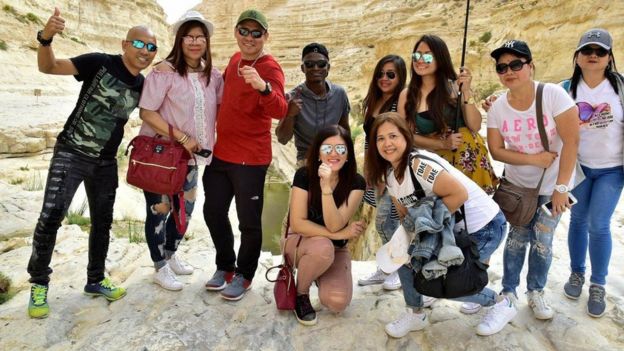 After more than a week of being detained in Niger he was deported back to Israel. But Israel refused to accept him and detained him again for several weeks.

"They tied my hands and legs and forced me into a plane back to Niger which refused to accept me again," the 24-year-old said.

Then the travel document issued by Israel expired when he was stuck in transit at Addis Ababa's Bole International Airport after Niger refused to accept him for a second time.

That was at the end of November, and he been stranded there ever since.

The BBC has repeatedly tried to contact Niger's foreign ministry and its embassy in Ethiopia without success to ask why their authorities believed the document was false.

Mr Muhamad now spends his day wondering the corridors of the departures area, depending on food handouts from people in the airport lounges.

"Sometimes the airline people give me food. It's the same every day but I am grateful to them," he said.

When I met him, he was having breakfast at an Ethiopian Airlines lounge. Its employees have been giving him food since he became marooned here. 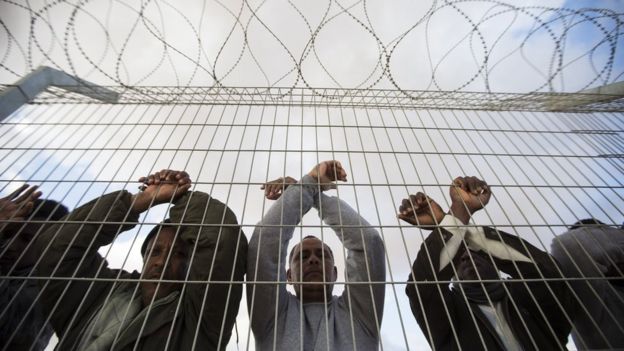 Many migrants who enter Israel illegally end up in detention centres

He took me to the Muslim prayer room and showed me a small corner where his bags and a small shawl were spread out.

"This is where I sleep most nights. If it's too full, I find one of the seats outside, say a prayer and try to sleep," he said, adding that he has had not access to a shower now for several months.

"I cannot stay here. I want to send out a message to [anyone] to help me because I want to move from here.

His case echoes that of a Syrian man who spent seven months living in an airport in Malaysia. Hassan al-Kontar posted regular videos from Kuala Lumpur International Airport, which brought him to world attention and last November he was allowed to travel to Canada, where he had been granted asylum.

"I miss my home. Everyone loves his or her home. Your home is your home. But this condition here is very hard. You understand? It's very hard," Mr Muhamad said.

Israel's immigration department defended itself, saying in a statement issued to the BBC that Mr Muhamad had been deported because he had been in the country illegally.

"He is a citizen of Niger. It has nothing to do with us because he was expelled from here and when he arrived in Niger, he refused to co-operate with the authorities. How is Israel connected? He is not an Israeli," the statement said.

It rubbished allegations that the emergency travel document was a fake.

"The Laissez Passer is a transit document for foreigners. It was legally designed precisely for such cases," the statement said.

'Asylum his only option'

Mr Muhamad insists that he has co-operated with all authorities - in Niger, Israel and Ethiopia - throughout his ordeal.

His case has put Ethiopia in an awkward position. It has always welcomed refugees and currently hosts nearly a million of them. 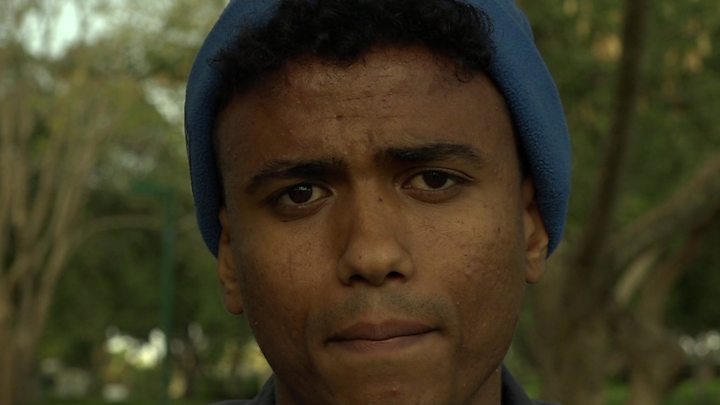 But an immigration official, who spoke on condition of anonymity, said they can only intervene in Mr Muhamad's case if he makes an asylum request, which he has refused to do.

"It's all up to him. We care about his dignity so we will approach him to find out if he will change his mind so he can get refugee status here. It's the only thing we can do," the official added.

But Mr Muhamad does not want to stay in Ethiopia, and says he would prefer to go home to Niger or back to his life in Israel.

An Israeli non-governmental organisation working with migrants and refugees said Mr Muhamad's case was similar to that of other migrants expelled from Israel.

"In 2016 we published a report, Forgotten in Prison, which details the cases of migrants who are faced with the same problem," it added

It also wants Israeli officials to investigate Mr Muhamad's allegation that he was brutally assaulted while in detention.

"What is required now is that Eissa Muhamad be returned to Israel so that his accusations of brutality at the hands of Israeli immigration authorities can be investigated, and a solution found so that he may return to Niger," said Shira Abo, the organisation's spokesman.

But until a resolution is found, Mr Muhamad will keep wondering Bole Airport like a ghost.