Nigeria: Ogoni widow testifies against Shell in The Hague

The widow of a Nigerian activist suing oil giant Shell over the execution of her husband says his death left her "traumatised" and "poverty-stricken".

Esther Kiobel is testifying in court in The Hague, demanding compensation and an apology from the Dutch-based firm.

She is among four women who accuse Shell of being complicit in the hanging of their husbands by Nigeria's military in 1995. Shell denies the allegation.

The protests were seen as a major threat to then-military ruler Gen Sani Abacha, and Shell. They were led by author Ken Saro-Wiwa, who was among nine activists hanged by the military regime.

Their executions caused global outrage, and led to Nigeria's suspension from the Commonwealth for more than three years.

Two of the widows were in court, but two others were denied visas to attend.

What was the atmosphere in court?

More than two decades later, memories of the executions still move the widows to tears, reports the BBC's Anna Holligan from court.

Mrs Kiobel wiped her eyes, and in a quivering voice described her husband, Barinem Kiobel, as "kind-hearted", our reporter adds.

Representatives of Shell looked on. At one point, the phone of one them rang as the widows wiped their eyes, prompting judges to remind everyone to keep their devices on silent, our reporter says.

What else has Mrs Kiobel said?

In a written statement, she said she had lost a "wonderful husband" and a "best friend".

"The abuses my family and l went through are such an awful experience that has left us traumatised to date without help. We all have lived with so much pain and agony, but rather than giving up, the thought of how ruthlessly my husband was killed... has spurred me to remain resilient in my fight for justice. 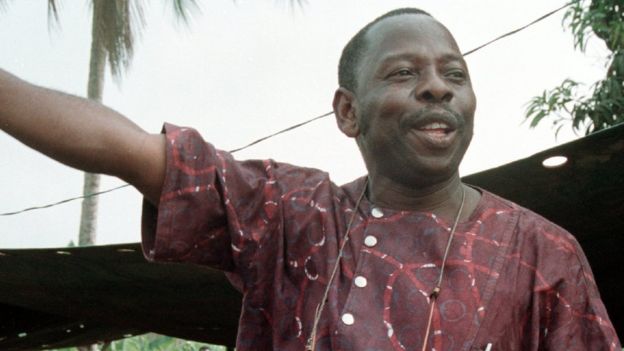 "My husband and the rest were killed... The memory of the physical torture my family and l went through has remained fresh in my mind, and whenever l look at the scar of the injury l sustained during the incident, my heart races for justice the more."

What is Shell's response?

In a statement, the firm said the executions were "tragic events which shocked us deeply".

The statement added: "The Shell Group, alongside other organisations and individuals, appealed for clemency to the military government in power in Nigeria at that time. To our deep regret, those appeals went unheard.

"We have always denied, in the strongest possible terms, the allegations made in this tragic case. SPDC [the Shell Petroleum Development Company] did not collude with the authorities to suppress community unrest, it in no way encouraged or advocated any act of violence in Nigeria, and it had no role in the arrest, trial and execution of these men.

"We believe that the evidence clearly shows that Shell was not responsible for these distressing events."