A formerly obese woman who claims being bullied for her 379lb (27 stone) frame drove her to become a binge eater and heroin addict reveals how she overcame her demons and halved her body weight.

Lifestyle coach Michelle Bakal, 26, from New York, now tips the scales at 189lbs (13st 5lb), having had 10 pounds of excess skin removed, and has discovered a new love of fitness after previously struggling to walk short distances.

Michelle knew she was larger than those around her from a young age. She often felt as though she didn't fit in at school, with bullies calling her 'fat' and even shouting 'watch out' as she walked through the corridors.

'I've been overweight since I was a child and I remember seeing the doctor at a young age and hearing that I was heavier than I should be,' Michelle admitted. 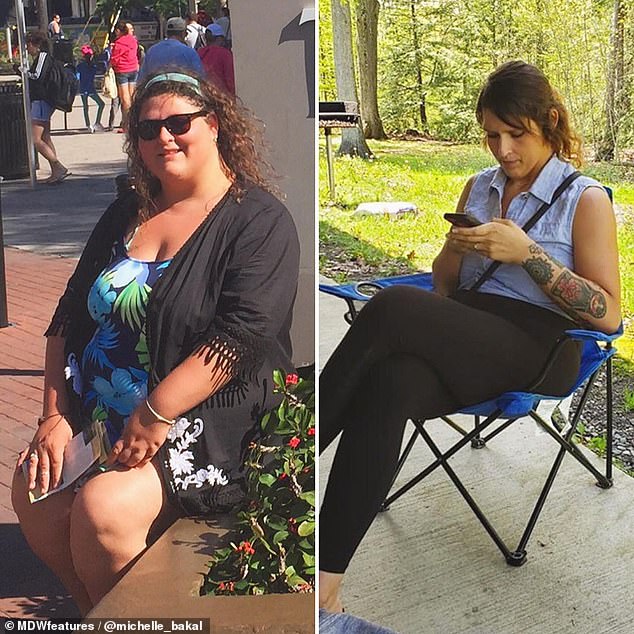 'I didn't think it was a problem until school started and I felt like I didn't fit into how everyone else looked. I became aware that not only was I heavier, but substantially taller than all the other girls. I felt like my body wasn't normal.

'In school, people would call me names and say fat jokes. I would walk down the hall and boys would yell "watch out!" as I was minding my own business.

'At my largest I did absolutely no exercise. The most I could do was to walk a short distance, but even that was difficult.'

The cruel jibes made Michelle feel as though she wasn't normal and at 16 she started experimenting with alcohol and Class A drugs.

'I started using drugs at 16, starting with marijuana,' she said. 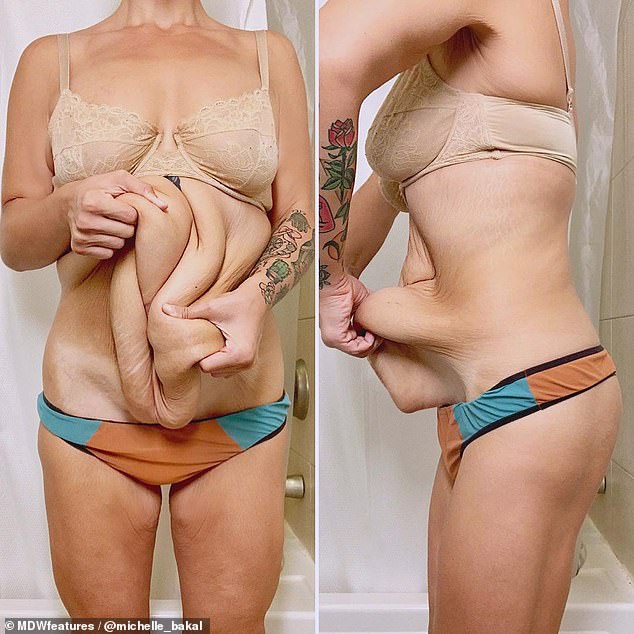 'That progressed to whatever was offered to me. How I got onto heroin was a prescription to opiates by my doctor. Feeling as amazing as it did, heroin was just the next step - especially when I would run out of my prescription.

'Once that line was crossed, there was no turning back.'

During this difficult phase, Michelle gorged on food and her weight increased to 379lbs (27st 1lb), becoming a size 4XL on top and a UK size 32 in trousers.

When she was 21, Michelle decided to try to get clean as she knew she wanted to turn her life around.

'I got sober in 2014 off heroin and all mood-altering substances,' she said.

'It was about a year into my sobriety when I realised that I had been using food my entire life to fill an emotional void. So, if I could get clean off drugs and alcohol then I could lose the weight too. That was the turning point.'

Michelle was diagnosed with a binge eating disorder in 2015, which highlighted that she had been turning to food as an emotional support. 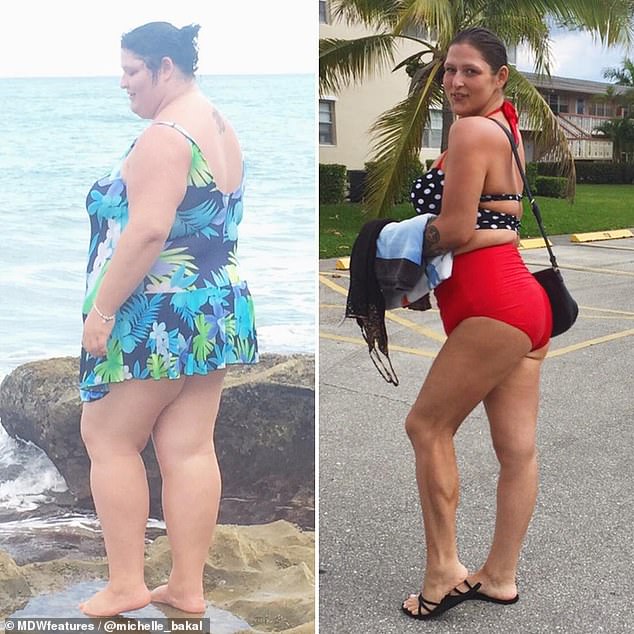 She had grown accustomed to eating two pounds worth of spaghetti for a meal, or an entire pie to herself.

'My first step was going to an eating disorder clinic,' she recalled. 'I realised that I could not eat for long periods of time and then binge on food to the point of feeling physically ill.

'When I found this out, I wanted to lose the weight for myself – it wasn't for anyone else, which I think was important.

'As I started to notice the weight falling off, it felt surreal and I wasn't expecting it. But at the same time, I felt like this time would be different because I wasn't trying to lose weight to impress someone else. It was for me and me alone.'

To kickstart her dramatic weight loss, Michelle had a vertical sleeve gastrectomy in October 2017.

Now Michelle goes to the gym five times a week to do weight training and body building, and hikes up mountains with her husband Zachary, 23. 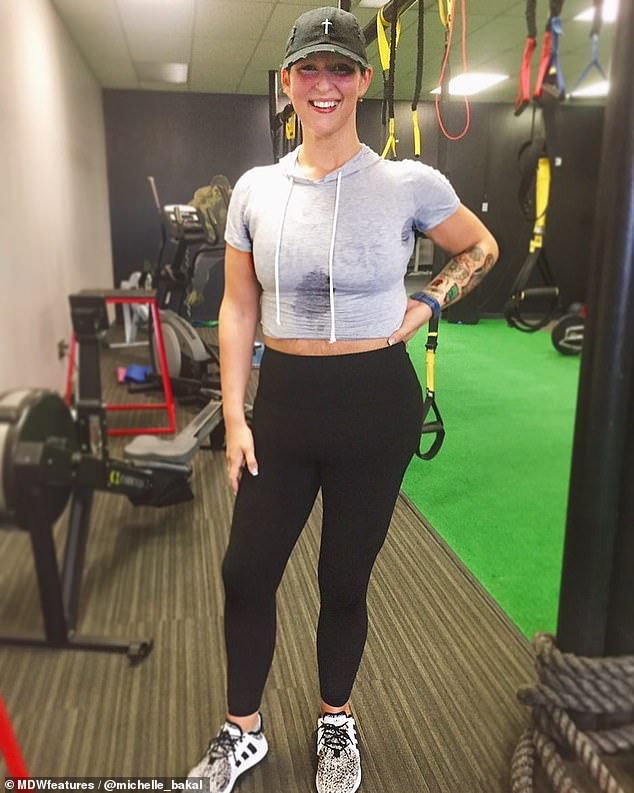 'These are things that I could never do when I weighed 379lbs (27 stone) because my mobility was next to nothing,' she said.

Michelle's weight has plummeted to 189lbs (13st 5lb) and she wears a size medium.

After hitting her goal weight and maintaining it for eight months, Michelle was able to have surgery to remove the excess skin she was left with.

She had a belt lipectomy, reverse tummy tuck, breast lift and extended arm lift to remove excess skin from her stomach, breasts and arms.

'My bariatric surgeon recommended that I wait until I hit my goal weight and maintain that weight for a minimum of eight months before considering skin removal surgery. So that's exactly what I did,' she said.

'The only difficult decision about it was wanting to get it done before having any kids. I had to tell myself that carrying and delivering a child would not leave me with the same amount of excess skin I had from losing 196lbs (14 stone).

'They ended up removing 10 pounds of skin which had all been hanging off me since I shed the weight!

'I am still recovering from surgery, so I don't really recognise myself physically quite yet. Emotionally, I feel like I have a better handle at life and how to deal with things now because before I would just bury my emotions with drugs and food. 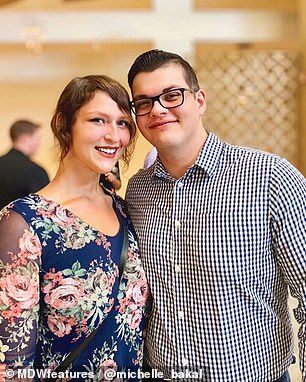 'It'll be a 12-week recovery period which is going well so far. I'm focusing on taking it easy because that's exactly what the doctor said to do. It's hard when I've been independent for so long and now, I have to rely on others to shower and dress myself.'

Although she is still recovering from surgery, Michelle is looking forward to seeing the results.

After discovering a love for fitness since halving her body weight, Michelle enjoys motivating others to turn their lives around through posting about her transformation on her Instagram page.

'Now, I weigh everything I eat – which sounds more annoying than it is but it's quite simple once you get the hang of it,' she added. 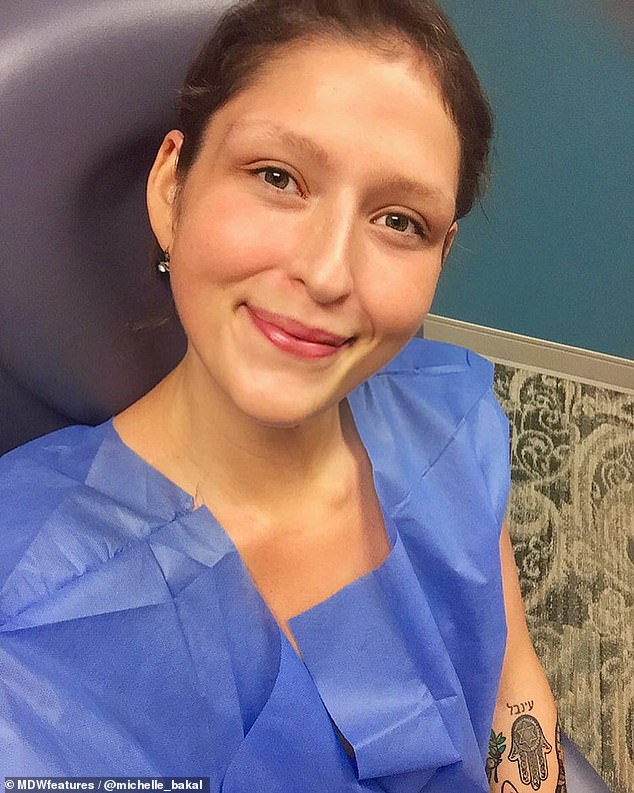 'I have a greater understanding of what kind of proteins, fats and carbohydrates I need to put into my body based on my energy expenditure.

'For breakfast I eat two protein bars every day. Since I'm a vegetarian, I get my protein from plain yogurt, cottage cheese, eggs and protein powder.

'Lunch is usually a cranberry walnut salad, and dinner would be vegan meatballs with some fresh veggies on the side.

'If I can do it, anyone can. Five years ago, I was a 379lb (27-stone) heroin user but then I got sober, lost weight and learned to love myself again.'