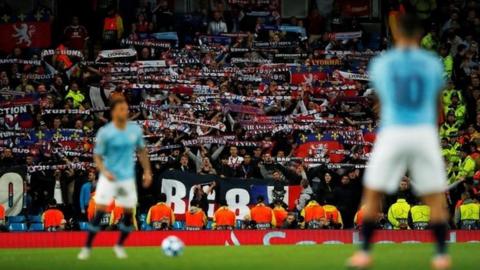 Police say they are investigating an "abhorrent hate crime" after a Lyon fan appeared to give a Nazi salute during the team's Champions League win at Manchester City.

The French club have vowed to ban the supporter for life.

"This is absolutely abhorrent behaviour and it has no place in our community, and no place in sport," he said.

"We are committed to policing racism at football matches, and hate crimes of any sort will simply not be tolerated."

He said officers were working with their French colleagues to identify the offender.

The gesture was caught on video and shared on social media, where it attracted widespread condemnation.

The club responded by saying it had seen the video and was working to identify the supporter.

"As soon as he is identified, he will be excluded for life," Lyon said in a statement.

Police say they are also investigating reports of fighting between fans near City's Etihad Stadium.

Footage on social media showed around 20 supporters clashing in the street outside a shop.

Meanwhile, two people were arrested for affray before the match following a disturbance in the city's Northern Quarter at about 18:40 BST.