A prominent New York doctor who was convicted of murdering his wife in their mansion has had his conviction overturned and will be retried after one juror sent 7,000 texts to family and friends discussing the case.

Dr Robert Neulander, now 68, was sentenced in July 2015 in Onondaga County Court for killing 61-year-old Leslie Neulander in 2012 in a fit of rage at his home before telling investigators she slipped.

But he is set to be tried again after the state's highest court, the New York Court of Appeals, deemed the messages sent by juror 12, Johnna Lorraine, inappropriate and 'troublesome' in a unanimous decision. 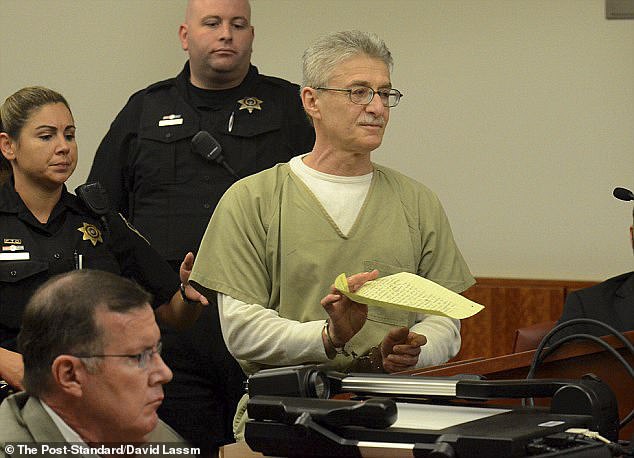 They noted her 'extreme deception and dishonesty' may have 'affected a substantial right' of the defendant, Syracuse.com reports. It is estimated the retrial will cost taxpayers $100,000.

In one text sent to her father Lorraine, who was not supposed to discuss the case with others at any time during the trial, told her father she had been picked to be on the jury.

He answered: 'Oh lucky you.' He followed up with: 'Make sure he’s guilty!' Lorraine did not reply.

A friend asked: 'Is he guilty?' Lorraine, who was 23 and a cheerleading coach at the time, replied: 'Can't tell.' Another acquaintance called Neulander 'scary'. 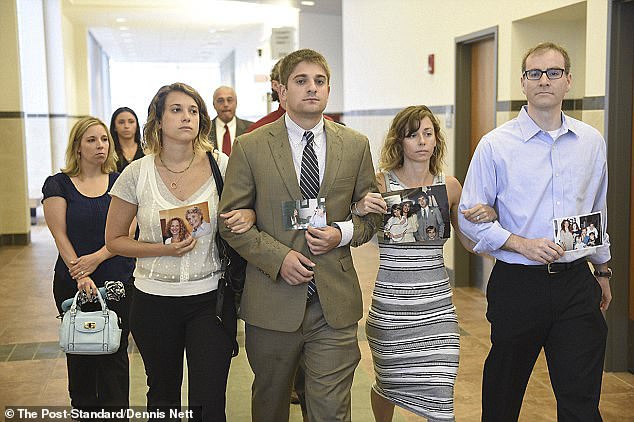 Neulander had been found guilty of second-degree murder and tampering with physical evidence after a three week trial. Jurors took 18 hours to make the decision.

His children Jenna, Ari, Emily and Brian were pictured walking into court with pictures of the whole family together.

Neulander told investigators his wife had slipped in the shower and he had carried her into the bedroom. The Neulanders were getting divorced at the time.

The texts came to light after another juror contacted Neulander's attorney.

Lorraine is then said to have deleted a number of messages she deemed 'problematic'.

She is also said to have go onto news websites covering the case - again not allowed as a juror.

Lorraine, who has not commented on the decision, will not face criminal charges.

The Court of Appeals say she was not biased in reaching a verdict and even sent messages telling friends: 'I can’t talk about it', and 'I’ll tell you all about it soon'.

In another she wrote: 'Like in reality someone’s life is in our hands! We could send an innocent man to prison or put a murderer away!'

Judge Rowan Wilson said: 'We agree that the extensiveness and egregiousness of the disregard, deception, and dissembling occurring here leave no alternative but to reverse the judgment of conviction and remit for a new trial and compel us to affirm publicly the importance of juror honesty.'

The decision upholds a mid-level appellate court. A local court had earlier upheld the guilty verdict.

After the appellate court's decision Neulander was freed from prison on $1 million bail, posted in cash by his son.

He had been sentenced to 20 years to life in prison. He told the court in a passionate plea for his sentence to be reduced: 'As I will one day be in front of God to be judged, I would not and did not take a life.

'I love my wife Leslie everyday, and I mourn her now and forever.'

District Attorney William Fitzpatrick told the court earlier in the trial: 'Leslie spent her last moments on earth struggling for her life before being beaten to death and being unceremoniously dumped in her own shower.'

Neulander’s lawyer, Alexandra Shapiro, said: 'Bob Neulander and his family greatly appreciate the Court of Appeals’ decision, which reaffirms that every defendant has the right to an impartial jury and a fair trial.'

No date for the new has been set but first chief assistant district attorney in Onondaga County Rick Trunfio said: 'We fully intend to retry him for the murder of his wife.'