RAF Tornado jets will be marking their retirement with a final flypast, it has been confirmed.

People across Britain will get a chance to say farewell to the fighter jets when they make a series of flights on 19, 20 and 21 February.

The fleet, based at RAF Marham in Norfolk, will be retired from service by the end of March.

Station Commander Group Capt Ian Townsend said it will be a "superb celebration" of the plane.

He also announced there would be a nine-plane formation flypast, taking off from RAF Marham on 28 February, which would fly over RAF Cranwell in Lincolnshire.

The planes will fly over much of the country on three different routes for the farewell tour.

They will be spotted above about 35 military stations and landmarks including RAF Lossiemouth in Scotland, RAF Valley on Anglesey in Wales and the National Memorial Arboretum in Staffordshire.

Timings have yet to be published, the RAF said in a social media post, which also lists all the locations. 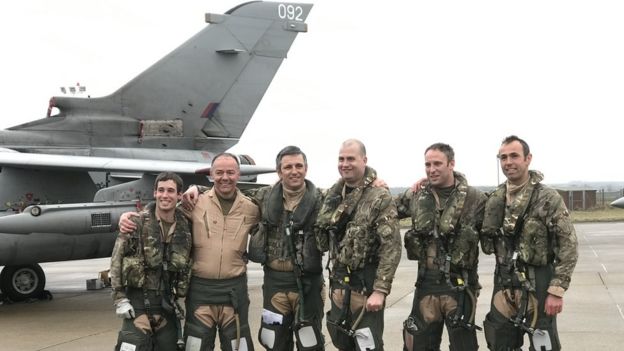 Eight Tornados, stationed at RAF Akrotiri in Cyprus and used in missions against the Islamic State group, returned to RAF Marham last week.

The fleet has been used by the RAF for 40 years and has taken part in combat since the first Gulf War.

It is being replaced by the RAF's F-35 Lightning II fighters and an upgraded Typhoon fleet.