An heiress who usually enjoys lavish holidays in The Maldives with her family was left sobbing when she tried out a rather more modest getaway for a TV experiment.

At first, Hattie Garmant, 19, from Hemel Hampstead thought she would be able to handle a weekend of camping for 5Star's Rich Kids, Skint Holiday, which airs tonight.

She was matched with Pete and Louise Hayward and their daughters Katie, seven, and Chloe, four, who decided to take her to a camping site for a three-day stay.

But within an hour, the heiress, who is used to splashing her cash on designer clothes and beauty treatments, was shocked to tears when it started raining.

'I thought I'd been able to handle more stuff,' she said. 'It's like, "how can people have fun doing this?".'

'I feel a bit overwhelmed. Ideally I'd rather be in a hot country, with sun and sea, compared to rain and sleeping in a tent.'

The young woman was not expecting to be going camping and struggled to cope from the moment the family arrived at Dernwood Farm.

Hattie's father funds her lifestyle and her love of labels. She owns a collection of Gucci trainers, heels, Versace blouses, Burberry coats and more. 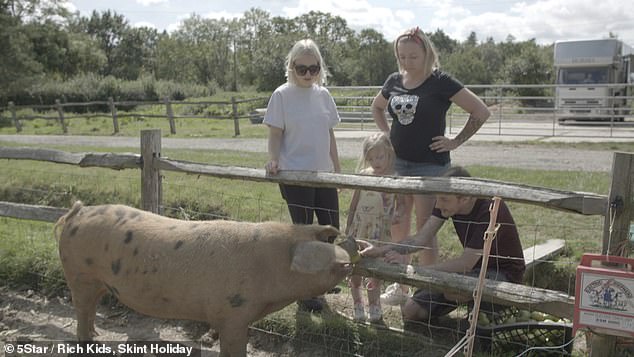 The heiress has never had to worry about money in her life, and explained that she can spend between £500 and £1,000 on makeup and beauty treatments a month.

The family's last holiday was in the Maldives, and thought it cost a grand total of £8,000 - £2,000 per person - the heiress admitted she found the experience boring.

Later in the day, things became awkward over dinner when Hattie revealed her Gucci trainers cost more than £700, to a shocked Pete and Louise.

'What you're wearing is five times more expensive than my wardrobe,' Pete joked.

Pete, an oven cleaner, and Louise, a weight loss consultant, are both self-employed and sometimes struggle to make ends meet.

This camping adventure was the Haywards' first holiday as a family, and it took them six months to save up the £180 fee for the two-nights stay.

And Hattie didn't do herself any favours by adding that her parents give her a £500 allowance to cover her commute, even though she is working and earning a salary.

Louise who had set a daily budget of £40 for the trip, did not seem impressed by Hattie's spending habits.

'It's quite tough to know that for some people, it is just that easy,' she said.

'How much would we love to be in that position where we could just have that disposable income.'

And while she stayed diplomatic in front of Hattie, Louise opened up further in an aside to the camera.

'It's a little bit uncomfortable to be honest,' she said

Hattie was not blind to the mother-of-two's uneasiness, but to her, it was all a matter of perspective.

'She has to think about it in a different perspective because I don't have to worry about certain stuff at the moment,' Hattie said. 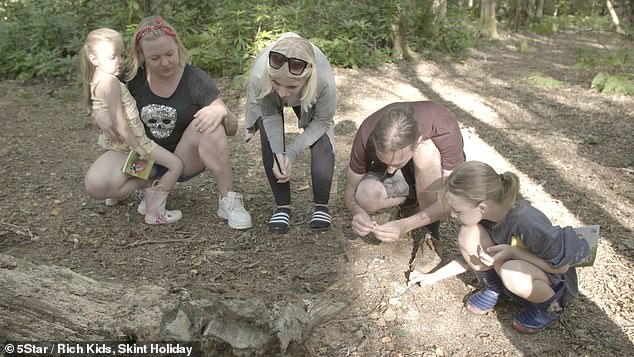 Curious to see whether Hattie would be able to handle a smaller budget, Louise tasked her with finding the family and activity for the afternoon with only £22.50 in her pockets, including food.

Finding she couldn't afford any of the activities around the camping site, Hattie bought a sticker book and a bug-spotting guide for £4.99 and £2.99 in order to entertain the kids.

With the remaining £14.52, Hattie then tried to cover dinner.

Overall, she found activities and dinner for the family for £20.23.

She admitted to being 'pleased with herself,' and was quite happy when the family went on to explore the nearby woods to look for wildlife.

Later in the evening, Pete and Louise opened up to Hattie about how hard their finances make it to deal with Katie's autism diagnosis.

'There are so many activities for kids like her to try, but there's definitely a limit as to what we can do so far with our budget,' Louise explained.

'You probably don't imagine what kind of impact money can have on someone's development,' Louis added, 'because it shouldn't.'

And indeed, Hattie was shocked by the couple's revelation.

'I never thought money could have this much of an impact,' she said. 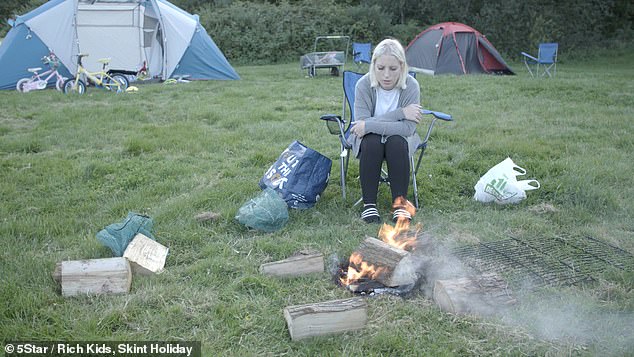 The next day, wanting to pay for a nice activity for the Haywards to do, and touched by their conversation about Katie's autism, Hattie bought the family a trip to the stables, where Katie and Chloe met horses and ponies, an activity recommended for children with autism.

Louise and Pete were very touched by her attention and say she 'couldn't have picked a better treat.'