Russia blames Israel after military plane shot down off Syria

Russia has said Syria shot down one of its military planes - but laid the blame for the deaths of the 15 personnel on board with Israel.

The defence ministry said Israeli jets forced the Il-20 plane into the path of Syrian air defence systems on Monday after failing to give Moscow enough warning of a strike on Syrian targets.

Israel rarely acknowledges carrying out strikes on Syria, but an Israeli military official recently said it had hit more than 200 Iranian targets in Syria over the past 18 months.

The Israeli government is concerned by what it calls Iran's "military entrenchment" in Syria, as well as shipments of Iranian weapons to the Lebanese militant group Hezbollah, which is fighting alongside Syrian government forces.

The details are murky, and Russia's account of the incident has yet to be verified.

According to reports, Monday's incident occurred about 35km (22 miles) from the Syrian coast as the Ilyushin Il-20 aircraft was returning to Russia's Hmeimim airbase near the north-western city of Latakia.

Reports on Syrian state media spoke of an attack in the area shortly before the plane disappeared. According to Sana news agency, the military said it had intercepted "enemy missiles coming from the open sea towards the city of Latakia". 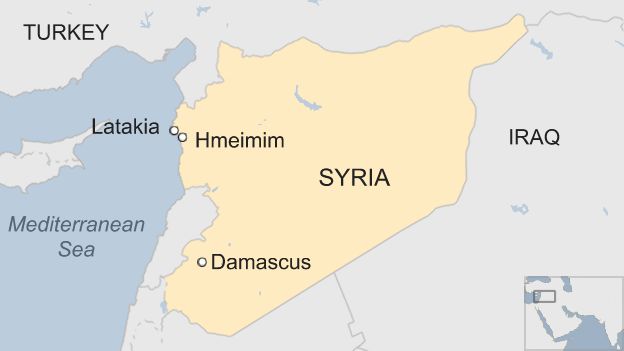 The Israeli military refused to comment on reports its planes had targeted facilities in the Latakia area on Monday, saying: "We don't comment on foreign reports."

A number of people were initially blamed after the plane disappeared, but on Tuesday the Russian defence ministry said the aircraft was accidentally shot down by Syria.

What does Russia accuse Israel of doing?

In a statement, Russia said Israel's "irresponsible actions" were to blame, saying it was given less than a minute's warning ahead of the strikes, which was not enough time to get the military surveillance plane out of the way.

"The Israeli planes deliberately created a dangerous situation for surface ships and aircraft in the area," a defence ministry spokesman said.

The spokesman accused Israeli pilots of "using the Russian airplane as a cover", putting it "in the line of fire coming from Syrian air defence systems".

The plane, the spokesman continued, was shot down by a Syrian missile. It is not possible to verify any of these claims.

"As a result of the irresponsible actions by the Israeli military, 15 Russian servicemen have died," the spokesman said.

"This is absolutely out of line with the spirit of Russian-Israeli partnership. We reserve the right to take appropriate action in response."

A search-and-rescue operation is under way, co-ordinated through personnel located at the Hmeimim base, the ministry added.

Why is a Russian aircraft in Syria?

Russia began military strikes in Syria in 2015 after a request from President Bashar al-Assad, who has stayed in power despite seven years of civil war.

Hmeimim is Russia's main base for air strikes on rebel groups in Syria - strikes that have enabled President Assad's forces to recover much lost ground since 2015. 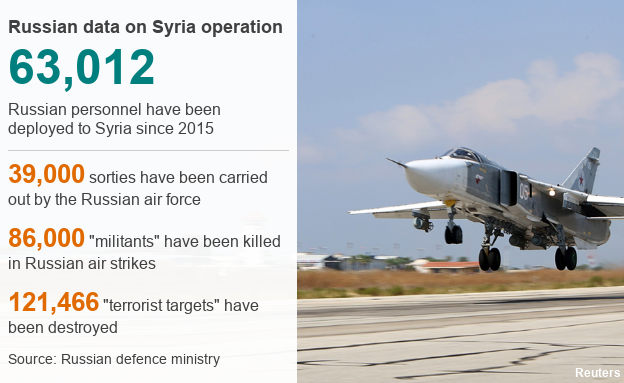 Russia says its air strikes only target "terrorists", but activists have said they mainly hit mainstream rebel fighters and civilians.

According to The Syrian Observatory for Human Rights, a UK-based monitoring group, at least 7,928 civilians and 10,069 combatants have been killed in Russian strikes.

Russia has also suffered personnel losses, including the deaths of 39 people when a Russian military transport plane crashed as it attempted to land at Hmeimim in March.

Just a few months earlier, Russia said it had increased security at Hmeimim in response to a foiled drone attack on the base just days after reports that rebel shelling had damaged several planes.

Earlier on Monday Russia and Turkey agreed to create a demilitarised buffer zone in Syria's Idlib province to separate government forces from rebel fighters based there.

Russian President Vladimir Putin said it would be 15km to 25km (9-15 miles) wide and come into force by 15 October.