The standard of flying by the pilot of a jet which crashed during the Shoreham Air Show was "about as negligent as you can get", a court has heard.

Andrew Hill, 54, faces 11 counts of manslaughter after failing to pull out of a loop manoeuvre in August 2015.

Jurors previously heard the move was executed at too low an altitude.

Jonathon Whaley, an experienced air display pilot and evaluator, told the Old Bailey that was a "fundamental thing" and you "do not do it".

Mr Whaley replied: "He had all the training, all the knowledge to know that he hadn't achieved his gate height, and none of the parameters were correct to complete safely this manoeuvre.

"To me that is about as negligent as you can get in terms of flying." 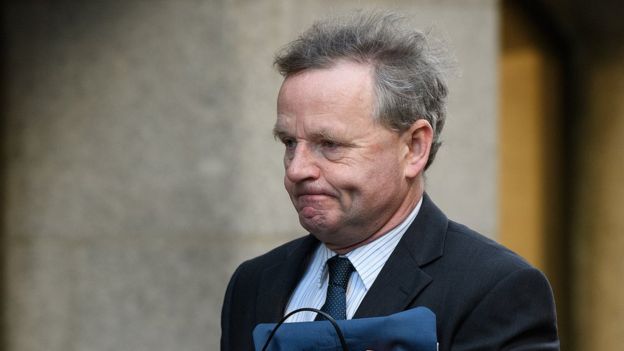 Giving evidence, Mr Whaley said he did not permit looping manoeuvres in the Hawker Hunter he flies.

Defending Mr Hill, Karim Khalil QC asked: "It can be thought of as inherently dangerous?"

Mr Whaley agreed it could, but acknowledged the manoeuvre was authorised to be carried out in displays.

"It does carry inherent dangers which is why the pilot has to be aware of them," Mr Whaley replied.

Mr Whaley was asked why he and other experts had said Mr Hill's display at the 2015 Shoreham Airshow contained "no difficult manoeuvres".

He answered: "I said it needed arguably more concentration, but I accept that if it's well flown then it's not a problem."

Mr Khalil asked him if Mr Hill may have become "fixated" on the road mid-stunt when he realised "things were not looking good".

"If you've got something like that in front of you I could imagine that becomes a focus of your concentration, not looking left or right," Mr Whaley replied.

"This is when it's becoming apparent that things aren't going well." 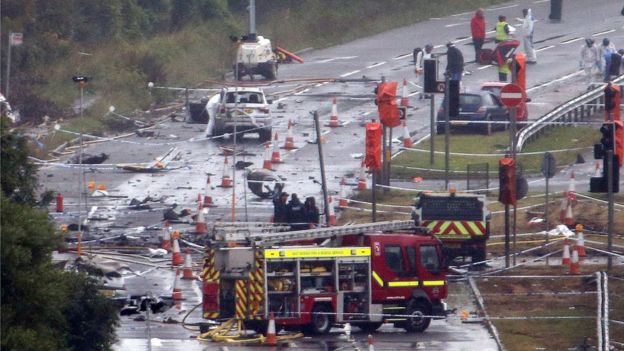 Emergency services on the A27 in the aftermath of the crash

After turning upside down, the Cold War-era jet fighter descended vertically towards the ground, the court heard.

Mr Hill tried to keep the plane in the air, but it came down on top of the busy A27 near Shoreham Airport.

Earlier the judge reminded the jury Mr Whaley was simply giving an opinion on the matter.

Mr Justice Edis said: "It will be up to you to decide to accept what the expert said, whether you prefer another expert, or you don't accept any of them.

"It's only an answer, not the answer."

Mr Hill, of Sandon in Hertfordshire, denies all charges.

Mr Khalil previously told the court that due to injuries sustained in the crash, Mr Hill cannot remember what happened.

He claims Mr Hill was affected by something like G-force, which reduces blood supply to the brain.