The much talked-about Sir Elton John biopic, Rocketman, touched down in the UK this week following its glitzy launch at the Cannes Film Festival.

The movie, directed by Dexter Fletcher and starring Taron Egerton chronicles the colourful career of the musician; from his early life as Reginald Kenneth Dwight to becoming the knight of the rock 'n' roll realm we know today.

Speaking at the Cannes press conference, actor Bryce Dallas Howard said it was "incredibly surreal to hear Elton crying a few seats away" at the premiere.

After the screening the rock star put on a surprise gig at a beach-side gala party, where he performed the film's title track alongside Egerton once again.

Sir Elton has been no stranger to the silver screen himself down the years, so let's take a quick look back at some of his most memorable celluloid moments. 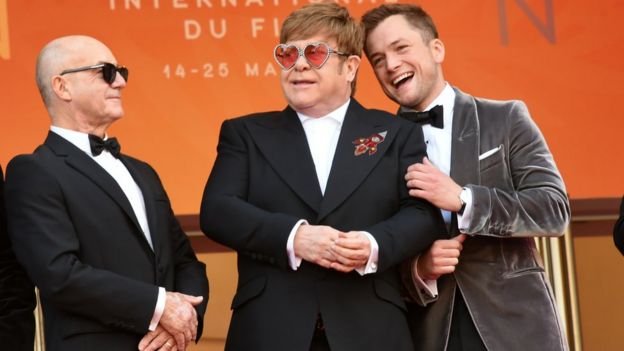 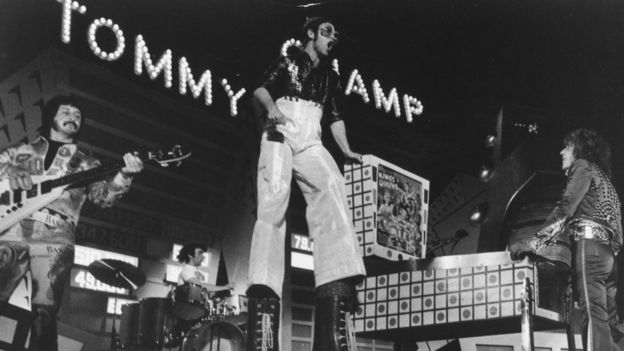 Having played himself in the 1972 concert film, Born to Boogie - alongside Marc Bolan and Ringo Starr - Sir Elton first showed his credentials as a character actor a few years later in The Who's film, Tommy.

He played the role of the Pinball Wizard - dressed in seven foot high boots - in the movie adaptation of the band's 1969 rock opera.

After years of being the champ, Elton's man had to hand over his pinball crown to the title star; "that deaf, dumb and blind kid," played by frontman Roger Daltry.

In fact, Sir Elton quite literally takes his hat off to him at one point.

Tina Turner, Eric Clapton and Jack Nicholson all appear in the flick, as do Oliver Reed and Ann-Margret, who was nominated for an Oscar and won a Golden Globe for her performance. 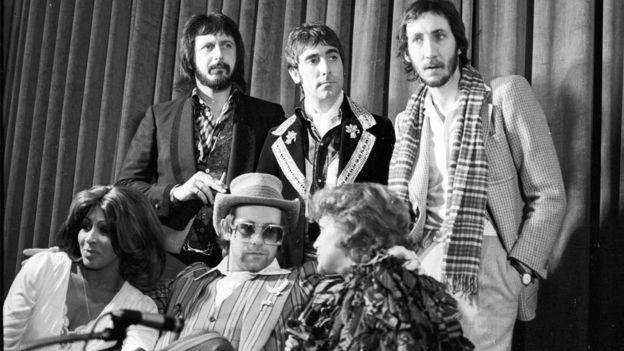 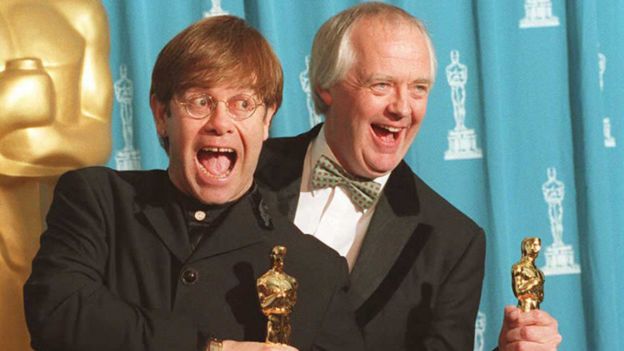 He may already have had more music awards than you can safely store in your garage, but Sir Elton had to wait until 1995 to get his hands on an Oscar.

There was a lot of love felt that year for Can You Feel The Love Tonight, which he wrote in collaboration with Tim Rice for the Hans Zimmer-scored Disney animation, The Lion King.

Sir Elton fended off stiff competition from, well... himself, twice - The Circle of Life and Hakuna Mata - to take the prize for best original song.

The song specifically soundtracked the romantic scene between Simba and Nala - you know the one (tissues at the ready). 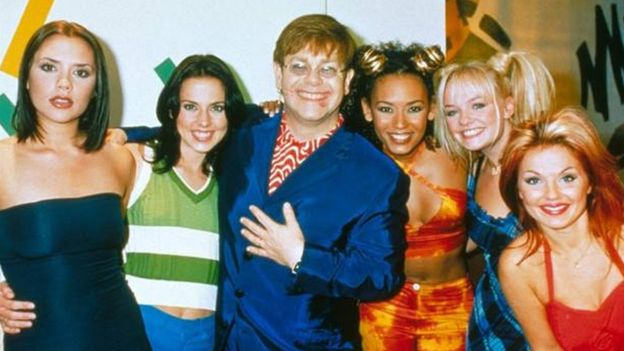 OK, so he was never going to be given any gongs for this one; the briefest of cameos in the Spice Girls movie - but it still goes down in 90s pop culture history.

The scene basically involved him saying a quick hello to Sporty, Scary, Ginger, Baby and Posh while exchanging kisses in the corridor.

There's a brilliant outtake, that you can find online, of Sir Elton delivering the gag: "Damn, never happened with Take That."

The girls went on to perform his track, Don't Go Breaking My Heart, alongside him for ITV's An Audience with Elton John later that year.

In 2018, the artist formerly known as Posh Spice - Victoria Beckham - told Vogue magazine that she decided to quit the group after seeing her friend Elton in concert and realising that she didn't feel anywhere near the same "passion and enjoyment" for performing as he does.

Oh Sir Elton, how could you? 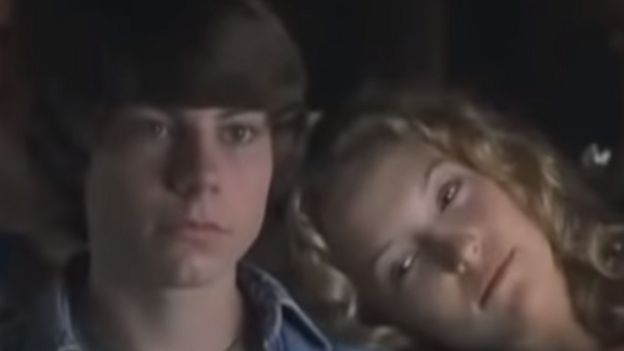 Cameron Crowe's cult retro indie film, about a schoolboy infiltrating the rock 'n' roll world while working for Rolling Stone magazine during its 70s heyday, had a fair few bangers in it.

However, the most memorable musical moment arrives when the entire Stillwater - that's the fictional band, by the way - tour bus burst out into an emotionally-charged impromptu rendition of [by-now Sir] Elton's Tiny Dancer.

You could argue it effectively made Sir Elton cool and relevant again.

The US director later revealed his lifelong love of the Watford singer and how he wanted to pay a "proper tribute" to him during the film's central scene.

"Tiny Dancer is wrapped up a lot in 1973 in my heart," said Crowe, "so I wrote it in the script, it was originally the part of that scene that meant the most to me, even the soul of the movie.

"Elton is always authentic, he feels like he's talking directly to you. It's really what you dream of when you're making a movie, to speak directly to one person and his music has always helped me do that in films."

He added: "And I always wanted to feel that I was able to earn the song."

The scene apparently took two days to get just right, meaning that "everyone sang a million times". Everyone apart from Noah Taylor that is, who played the band's tour manager as "he's a punk rocker!"

Sir Elton repaid the compliment to Crowe by telling him: "I'm gonna have to start playing that in all my concerts now."

"It's just slightly surreal and great" beamed the man in the director's chair. 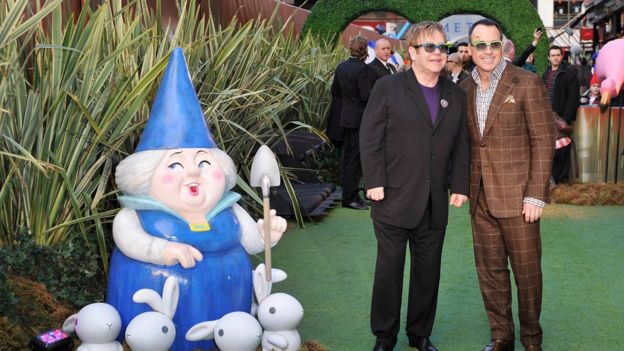 The soundtrack for the animated rom-com, based loosely (very loosely) on William Shakespeare's classic play, Romeo and Juliet, reads like the track-list for an Elton John greatest hits collection.

Ordinarily that would cost a filmmaker and arm and a leg, but handily the very same songwriter was the executive producer on this one.

The movie stars the voices of James McAvoy, Emily Blunt, Michael Caine, to name but three.

The standout scene is set to the tune of Saturday Night's Alright For Fighting; a rocking little number that was originally recorded for Elton's 1973 record, Goodbye Yellow Brick Road.

However, even way back then he was probably dreaming that the track would one day find its true spiritual home as the soundscape for a fast-paced fictional alleyway lawnmower race. 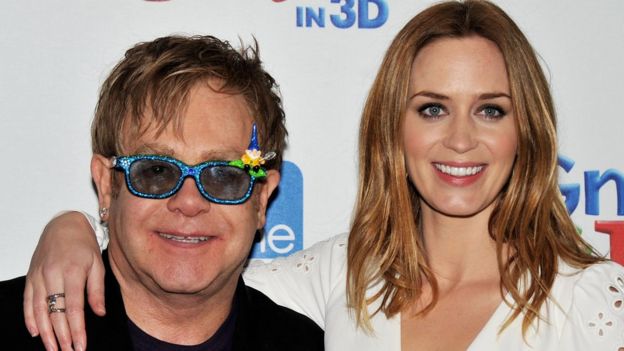 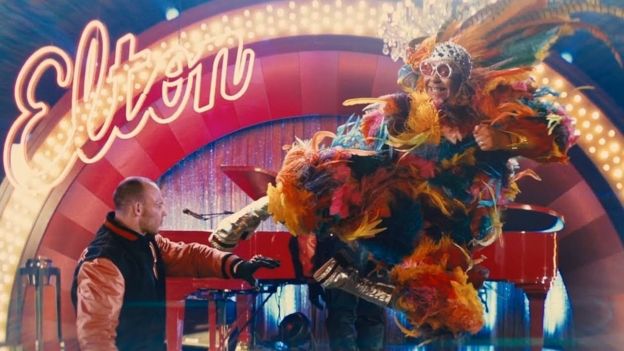 Last but not least, the same song got a rather more violent run out a few years ago in the second instalment of Matthew Vaughn's Kingsman movie series.

The UK director actually wanted Elton to be in the first film three years earlier, but alas it was not to be. So when Vaughan finally got his man, it's fair to say he made the most of it, dressing the singer up in one of his old exotic bird stage outfits and having him kung-fu kick someone in the face in a pair of his trusted old Tommy-era platform boots.

"It was so weird getting into those old clothes again," said Elton, in conversation with Vaughan on his Beats 1 radio show.

The Layer Cake director explained his choice of Saturday for the ridiculous piano-side fight scene.

"It's incredibly cinematic," said Vaughan, "and it's got three acts to it which means I can build the action to it.

"In the movie we used five different live versions and mixed them all together which was [very] difficult to do!" 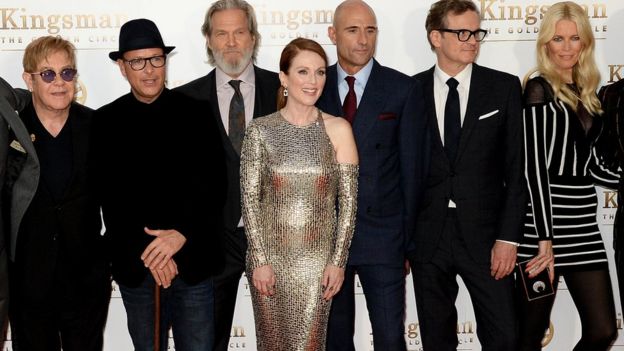 He added: "It's fun, energetic, great for action but also warm and feel good - it made my film 100 times better."

Next time around, Sir Elton, who acted opposite Julianne Moore and Colin Firth, said he wants to be one of the actual Kingsmen and not just a colourful sideshow.

Well, its prequel; The Great Game, is pencilled in for a February 2020 release, so we won't have to wait too long to see if the sun has gone down on perhaps his best chance of a cinematic lead role.

If Rocketman goes down well, at least he won't ever have to play himself again.