Spain's Socialist government is widely expected to call a snap general election after failing to get its budget through parliament.

Prime Minister Pedro Sánchez's bill failed after parties from the Catalonia region refused to support it.

Their requests for discussions about the region's right to self-determination had been refused.

Before the vote, government sources had warned that a defeat would result in an early election.

In the end, 191 out of the parliament's 350 members voted to reject the government's budget.

Mr Sánchez left the room without making any announcement or comment. some of his political opponents, however, called for fresh elections in media interviews.

Catalan parties rejected the proposals in the same week that Catalan separatist leaders went on trial for rebellion and sedition over their unrecognised independence referendum in 2017.

Mr Sánchez leads a minority government, with less than a quarter of the seats in parliament.

He became prime minister after his predecessor, Mariano Rajoy, was pushed out in a no-confidence vote over a corruption scandal. But Mr Sánchez's nomination was supported by a range of smaller parties with competing interests.

If he calls a general election, it will be the third in five years.

Catalan pro-independence parties had supported the government's previous legislation while insisting on a dialogue over independence for their region as the price for supporting the budget.

The parties which Mr Sánchez needed to support him said they were open to negotiations so long as the Spanish government considered Catalonia's right to self-determination.

But the government's stance remains that, according to the country's constitution, the nation is "indissoluble", and no part of it can secede from the whole.

That argument came to the fore when the 12 Catalan pro-independence leaders and activists went on trial on Tuesday. 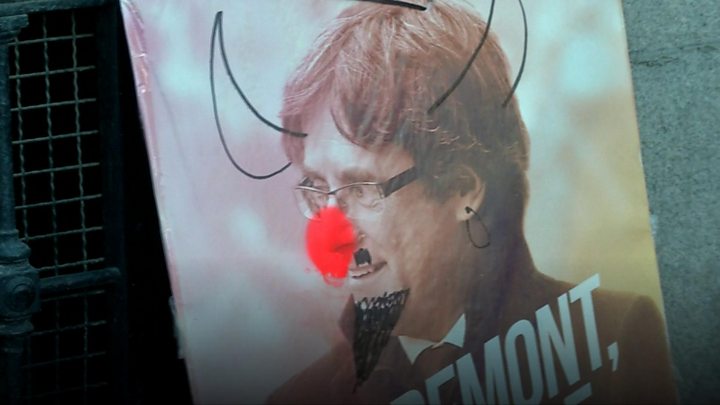 Outside the court, rival groups offered support - or scorn - for the accused

Catalonia's current regional government supports the collection of former ministers and public figures. Its president, Quim Torra, turned up to the trial wearing the yellow ribbon - a symbol of solidarity.

He told Reuters news agency: "We are not demanding anything that isn't democratic, that wouldn't be done via ballot boxes." 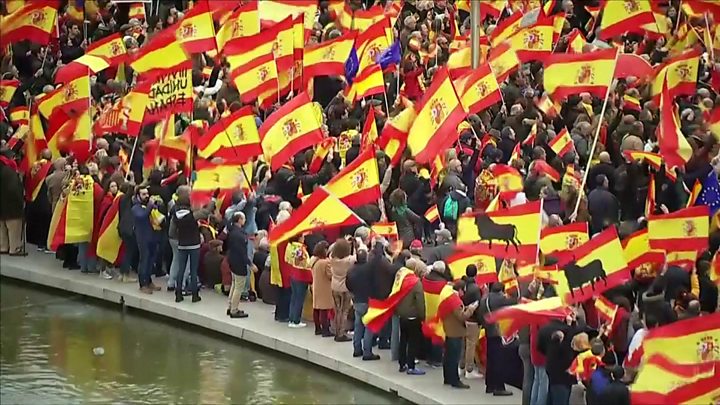 Long hours of negotiation and parliamentary debate failed to break the deadlock.

Long hours of negotiation and parliamentary debate failed to break the deadlock.

Ahead of the vote, Spain's finance minister María Jesús Montero attempted to appeal to economic sensibilities, labelling the budget's provisions for Catalonia as generous.

But she also called the insistence on independence talks a form of "blackmail".

If an election is called, the outcome is not certain to return Mr Sanchez's minority government to power.

The largest party in the current parliament, with 134 seats, is actually the conservative People's Party.

Mr Sanchez's Socialist party holds just 84 out of the 350 seats, propped up by a confidence-and-supply agreement and the support of a handful of smaller parties.

But it has the advantage in the opinion polls, which show the party ahead of its rivals.