A man has revealed his horrific wounds after he was stabbed in the stomach with a steak knife at a party because he had ordered a taxi home.

Adam Robertson from Walker, Newcastle, was partying in a Quayside flat in the city when he decided and order a taxi home at 4.30am.

Yet his friend, Nathan Andrewartha, 22, 'seemed to take offence' at Mr Robertson's decision to go home and flew into a cocaine and whiskey-fuelled rage inside the Dream Apartment on City Road.

Drenched in his own blood, Mr Robertson was left lying on a bed and feared he may die after the attack which could have easily ended in a murder charge, a judge ruled. 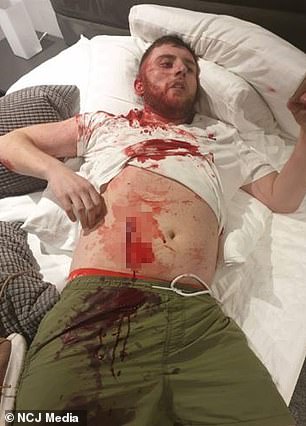 Andrewartha, of Scrogg Road, Walker, was arrested and initially charged

But prosecutors accepted his guilty plea to the lesser offence of unlawful wounding and wept as he was jailed for two years last week.

Recorder Jonathan Aitken told him that his actions could have seen him spend life behind bars.

Mr Robertson said his attacker 'deserves' to behind bars and has revealed graphic pictures of his blood-stained t-shirt just moment after the attack on March 23 last year.

'I was in hospital for weeks because of what he did to me, and the doctors were worried I might not pull through,' he said.

'I've even lost my job because of what he did - he's just a scumbag.'

Newcastle Crown Court heard earlier that night, Andrewartha had been 'showing off and bragging' about what he had done to other people.

With the steak knife tucked down his trousers, he threatened to stab a work colleague's boyfriend who had mistreated her.

Adam added: 'He was going around all night acting like an idiot, saying he was scared of nobody.

'I'll always remember him standing in the middle of the room with a bottle of Famous Grouse whisky, drinking it straight from the bottle.

'I ran at him and he ran at me but as we met, he stabbed me right in the belly and slashed me all over,' said Mr Robertson.

'I then got him in a headlock and he was trying to stab me even more but my friend took the knife off him.

'I looked him straight in the eye and said 'You've stabbed me'.

'He just went 'Aye, I know I have' and then he started crying.'

As he bled out, Mr Robertson claims Andrewartha, realising the seriousness of what he had done, begged those present not to contact the police before leaving and going home.

Mr Robertson was taken to hospital, where he had a 3.9ins wound behind his ear and a puncture wound to his abdomen.

And that night, his family kept a vigil at his bedside in the Royal Victoria Infirmary in Newcastle where he was treated.

Recorder Jonathan Aitken said: 'I have to sentence you for unlawful wounding on a person who used to be your friend when, in a drink and drug-fuelled state and not thinking correctly, you took umbrage at him due to some imagined slight because of the way you were intoxicated.

'You attacked him, he thought he had been punched but in fact you had a knife in your hand and that inflicted a very serious injury.

'It could so very easily have ended his life and yours as well, to all intents and purposes, because you would have got life imprisonment.' 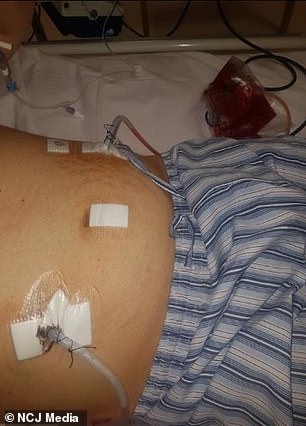 The court heard how Mr Robertson's injuries left him unable to work and he lost his job as a result.

Mr Robertson said he is also now cautious when out in public and spends most of his time at home.

'What he did left me really deflated,' he said.

'For me, what happened since was all about rebuilding my confidence as I've always been in work so he has robbed me of that.'