Stan Lee's death at the weekend prompted an outpouring of emotion and tributes to the man mostly responsible for the Marvel Universe.

Characters like the X-Men, the Avengers, Iron Man, Spider-Man and The Incredible Hulk all came from his uniquely creative and fascinating mind, which entertained generations for decades and will continue to for years to come. 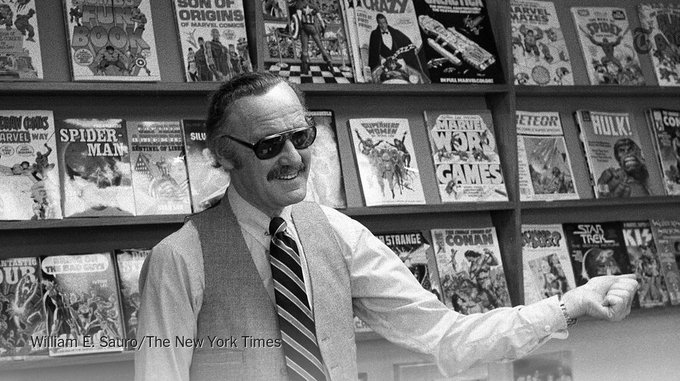 Although his characters all possessed amazing powers and saved the world on a regular basis, they all had to overcome adversity or bigotry in order to triumph and live their lives without prejudice.

Take, for instance, the X-Men. A group of gifted young people, whose powers saw them become vilified by society just because they were different.

Similarly, the Avengers are a group of people from different backgrounds, with different ways of living and beliefs, that have to learn to co-exist to defeat evil.

Lee wasn't exactly being subtle with the messages that he was sending with these characters and stories, in that diversity and accepting other cultures is an important part of life that everyone should try to adhere by.

In 1968, Lee laid out exactly what he was trying to say in an edition of Marvel's 'Stan Soapbox' where he admonished bigots and racists.

This brief essay was shared by Ryan Parker, of The Hollywood Reporter on Sunday and it has subsequently gone viral. 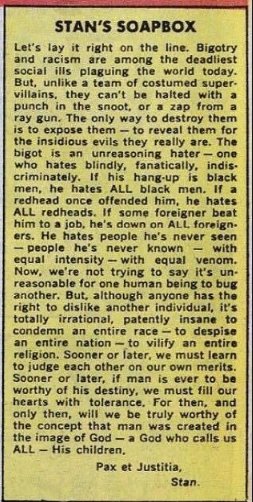 In the piece, Lee wrote:

Let's lay it right on the line. Bigotry and racism are among the deadliest social ills plaguing the world today. But, unlike a team of costumed super-villains, they can’t be halted with a punch in the snoot, or a zap from a ray gun.

The only way to destroy them is to expose them—to reveal them for the insidious evils they really are. The bigot is an unreasoning hater—one who hates blindly, fanatically, indiscriminately.

If his hang-up is black men, he hates ALL black men. If a redhead once offended him, he hates ALL redheads. If some foreigner beat him to a job, he’s down on ALL foreigners.

Now, we’re not trying to say it’s unreasonable for one human being to bug another.

Now, we’re not trying to say it’s unreasonable for one human being to bug another.

But, although anyone has the right to dislike another individual, it’s totally irrational, patently insane to condemn an entire race—to despise an entire nation—to vilify an entire religion. Sooner or later, we must learn to judge each other on our own merits.

Sooner or later, if man is ever to be worthy of his destiny, we must fill out hearts with tolerance.

For then, and only then, will we be truly worthy of the concept that man was created in the image of God–a God who calls us ALL—His children.

Despite these being 50-years-old, there is something still worryingly relevant about Lee's words, something that was echoed in the responses to the essay on social media.

Those people aren't very bright. The avengers and X Men are LITERAL social justice warriors and always have been.