Stolen daughters: what happened after #BringBackOurGirls?

In 2014, the #BringBackOurGirls social media campaign transfixed people around the world concerned about the plight of 276 schoolgirls kidnapped by the terrorist group Boko Haram.

More than four years later, the spotlight shines back on their plight, and that of thousands of women like them, in the documentary Stolen Daughters: Kidnapped by Boko Haram, premiering on HBO.

The wrenching film follows two Chibok girls freed in 2017 and two women who, like thousands of others, were kidnapped but are known as “forgotten girls” because they weren’t captured in a high-profile event.

Karen Edwards, a writer and producer of the documentary, told the Guardian that the Chibok girls were a symbol for a much larger problem in north-east Nigeria.

“Most families have been touched by Boko Haram, nobody is immune from it,” said Edwards. “It’s so widespread, there is fear they’ve [people kidnapped] been radicalized but there is also an element of commonality that if it hasn’t happened to them it is only by the grace of God.”

Boko Haram has killed more than 20,000 people and displaced at least 2 million. Mines laid by Boko Haram killed 162 people in two years and wounded 277, according to a report released last month. This week, a Boko Haram faction killed an aid worker. And 112 Chibok girls are still missing.

The girls released last year are the focus of the documentary, which provides an exclusive look at the safe house where they have lived, their first time being reunited with family and the moment they meet their former classmates, who continued their studies while they were in captivity.

The Forgotten Girls, meanwhile, try to recover their lives in Maiduguri, a city targeted repeatedly by Boko Haram, scraping by on support from aid groups. They must also confront a community worried that the women, as well as men and children kidnapped by the group, have returned radicalized.

“The community in Maiduguri has been really stoic in opening up their doors to refugees and providing shelter,” said producer Sasha Joelle Achilli. “There’s a bit of both: there’s the fear and stigma attached to the people who have been living with Boko Haram and there’s also just great openness and generosity to help the other.”

The stories and scenes from Maiduguri provide a less varnished look at terrors Boko Haram is still carrying out against Nigerians, while the Chibok girls story is more focused on rehabilitation.

This is largely because of restrictions Nigeria’s government put on the production.

In an early scene, the head teacher at the safe house gathers the Chibok girls to announce the film crew has arrived. She explains to the girls that the film-makers have been told not to ask about their experience with Boko Haram. “Do not tell them about what happened in the forest,” she warns. 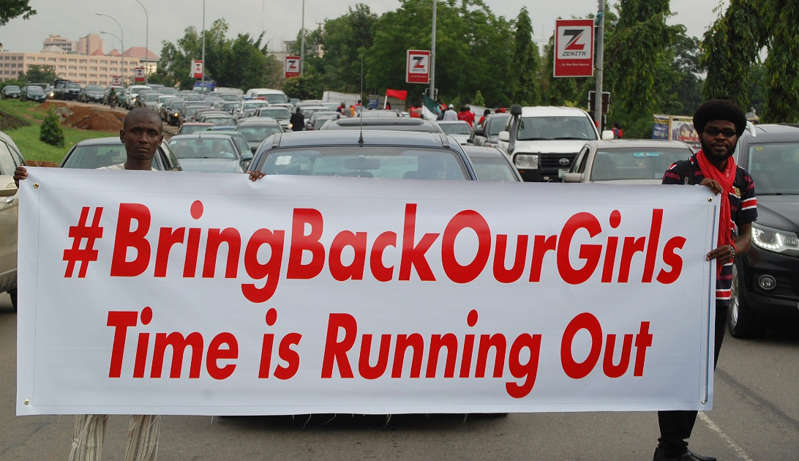 Despite those warnings, a sliver of their experience comes through from anonymized diaries girls shared with the film-makers.

Edwards said the girls did say they felt safe there and were grateful for the government’s protection because they are still scared of Boko Haram. “It’s a complex situation but we made sure we were honest with the audience that this is the condition and this is how they’re being told not to talk about it,” Edwards said.

Because the Chibok girls are warned away from disclosing what happened to them at the hands of Boko Haram, it’s the Forgotten Girls who offer a glimpse of what happened in the forest.

A woman called Zahra, whose name was changed for safety reasons, explains what responsibilities Boko Haram gave women in the three months she was there: caring for the sick, helping those who were pregnant and helping to kidnap more women.

It’s the latter activity that appears to have shaken Zahra most, as she describes a violent attack that happened during a kidnapping she was enlisted to help with under the threat of death.

Zahra tells the story of what happened to a 14-year-old kidnap victim in a few sentences, each worse than the one that came before, then concludes: “I will never forget her all of my life.”