The modern languages student, 21, was on the trip of a lifetime with her family and felt "invincible" given she was "young, active and healthy."

However, just days later, Phoebe, from Canterbury, Kent, was left on the brink of having her leg amputated after developing full-blown sepsis.

Doctors had no option but to put Phoebe through four major operations in seven days - but miraculously managed to save her left leg.

Now in recovery, Phoebe says she is "lucky" to be alive and is bravely sharing her story to raise awareness of deadly sepsis.

She said: "My experience just goes to show that anyone can get sepsis. It could happen to anyone.

"One of the nurses described me as the 'unluckiest miracle'.

"I'm unlucky because I stood on that sea urchin and for what followed, but I'm so lucky that I'm still here."

Phoebe's nightmare ordeal began when she noticed her left foot had started to swell up after she stepped on a sea urchin while on a holiday in Barbados in October 2018.

She said: "I was on the beach one day and stepped on a sea urchin.

"I didn't think anything of it really.

"Two days later I noticed my feet were starting to swell up.

"It got to the point where I couldn't even walk."

Phoebe went to see her doctor who gave her some alcohol wipes and antibiotics - and within five days her feet felt better.

She flew home from Barbados and returned to university, but within a few days began to feel unwell again.

She said: "I went back to uni and my parents were coming down the following weekend which was the weekend of Remembrance Sunday.

"I woke up that day and really struggled to function.

"I couldn't work out what was happening and I remember feeling quite sweaty.

"I was supposed to go to the rugby with them but I had to go home and spent the whole day throwing up.

"On the Sunday morning I got up and noticed there was something wrong with my leg. I just thought it was really bad cramp. 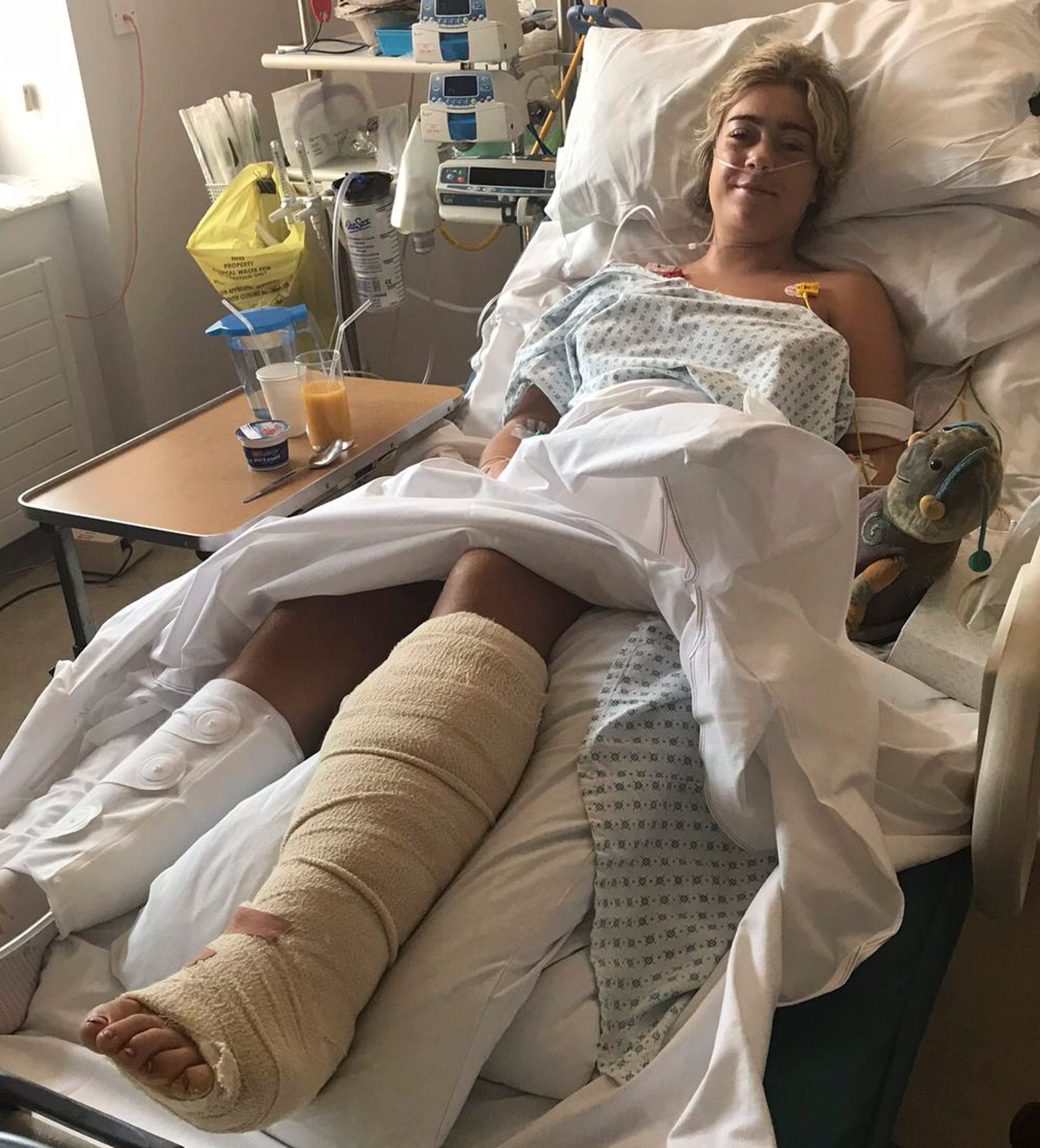 "I slept through the rest of the day, and that night, my leg just went solid. It was incredibly painful, I've never known anything like it.

"Eventually I screamed at my housemates that something was wrong and they drove me straight to A&E and carried me in."

Despite a nurse saying Phoebe probably had severe flu and should go home, she insisted that she did not feel right and was given a blood test.

It was then that doctors realised that Phoebe was in the grip of a severe infection in her left calf, invasive streptococcus A, which quickly led to her developing full blown sepsis.

Doctors even told Phoebe there was a high chance they would have to amputate her left leg to halt the spread of the infection.

However, doctors managed to save her leg by performing four major operations in seven days.

And after around a month in hospital, Phoebe's condition gradually stabilised and she was discharged.

Despite her recovery, Phoebe has still had two re-occurrences of infection in her leg that left her bed ridden and on a cocktail of antibiotics.

Phoebe surpassed doctors expectations and managed to relearn how to walk in one month rather than the six that doctors predicted it would take her.

Phoebe said: "It was really difficult, I couldn't do anything for myself.

"I had to relearn how to walk again and use my left leg.

"It was tough because I've always been quite active and suddenly I couldn't do anything for myself. If I wanted to shower, I had to ask my parents to help me.

"The doctors and nurses were fantastic and the care I received from the NHS was amazing.

"It was easy to get depressed and give up. I thought I should just drop out of university but I wanted to carry on.

"I still can't feel my left leg even now. I'm pretty fit but it can affect daily life.

"I also have scars on my left leg. In comparison to other people's scars they're not that bad but people do stare at it."

Phoebe added: "It's changed my view of the world.

"Life is short and you need to treasure every moment."

"It brought my family even closer together.

"I appreciate the small things so much more, life is really short so you need to enjoy it."

Phoebe is now preparing to run the Madrid Half Marathon in March 2020 - despite only just relearning how to walk.

She is raising money for the UK Sepsis Trust on her GoFundMe page.