The fight over the Indian baby born in a bank queue

He arrived in the world with a bang. His birth in a bank queue made global news. But two-year-old Khazanchi Nath is now at the centre of a bitter fight between the two sides of his family and two villages because of his celebrity status. The BBC's Geeta Pandey travels to rural Kanpur in northern India to piece together the toddler's story.

Khazanchi, which means "treasurer", was born in the state of Uttar Pradesh on 2 December 2016, less than a month after the Indian government banned 1,000 and 500 rupee notes overnight.

The decision by Prime Minister Narendra Modi, locally called demonetisation, led to a major cash crunch and for weeks millions of Indians were seen queuing outside banks to withdraw new currency notes.

A very heavily pregnant Sarvesha Devi had walked from her home in Sardar Pur village to the bank in Jhinjhak town and taken her place in the line - along with her mother-in-law Sashi Devi, her eldest child, 10-year-old daughter Priti, and hundreds of others - when she went into labour.

Her story made headlines and tiny Khazanchi became the poster boy in the state election campaign against India's ruling BJP. When he was just over two months old, I travelled to their dusty village to see him. 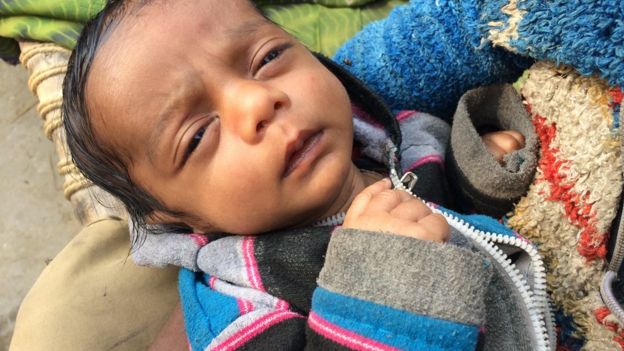 Four months before his birth, his father had died from tuberculosis. Describing the trauma of giving birth in the bank, his mother told me she too would have died if it wasn't for her mother-in-law.

But last week, when I wanted to see Khazanchi again, I had to visit another dusty village - Anantpur Dhaukal, where his mother moved last year after a bitter row with her in-laws. It's where Sarvesha Devi's parental home is, where her mother and three brothers live with their families.

Khazanchi is curious about me - he fixes his kohl-lined eyes on me and, at his mother's prompting, shakes my hand. I ask him who painted his nails deep pink. He smiles and points at Priti, his sister.

Unaware of the bitter battle being fought over him, he seems more interested in my glasses and tries to snatch away my phone when I get close to him to take a photo.

Sarvesha Devi borrows two wobbly plastic chairs from a neighbour's house and we sit facing each other to chat. Within minutes, Khazanchi begins to get cranky. "He's hungry," she says and starts breastfeeding him. By now, word has spread about my visit and we are soon joined by her mother, her brothers and a few neighbours.

Once Khazanchi has quietened down, I ask Sarvesha Devi about her relationship with her mother-in-law. This time, she has nothing complimentary to say about Sashi Devi. In fact, the relationship has soured so much that she talks about threats to life - her own and Khazanchi's. 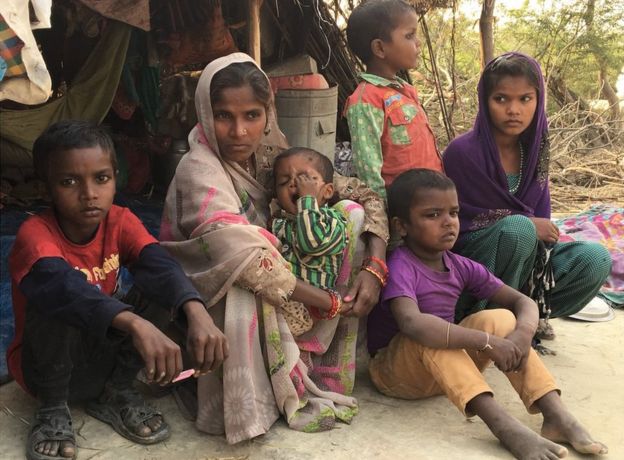 The previously life-saving, loving mother-in-law is now described as the dreaded monster-in-law whom she accuses of hitting her regularly and demanding half the compensation money.

It's a significant amount of money for a family steeped in poverty with no fixed sources of income. And it was then that the family relations began unravelling.

So what happened that tore the family apart like this? That's the question I posed to Sarvesha Devi - and to her mother-in-law when I visited her later in Sardar Pur. And their family members and villagers.

In the claims and counterclaims, sometimes it's difficult to sift the truth from falsehood, to understand who's being honest and who's just exaggerating.

Khazanchi's family belongs to the Baiga tribe, which is among India's poorest and most deprived communities. They have little education, own no land and most make a living through begging.

Traditionally though, the Baigas were snake-charmers, and even though catching snakes was outlawed a long time ago, every time I've visited them, they've proudly shown off reptiles. 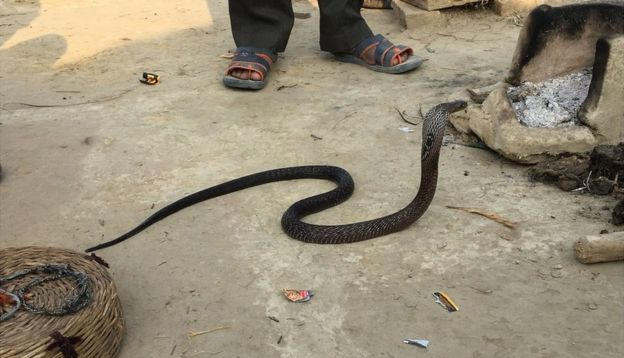 This time too, one villager asks me if I want to see the latest catch and even before I can respond, an angry baby cobra is brought out of a basket. He prods and pokes the reptile which begins to crawl on the ground, less than a metre from me. It's defanged, he assures me.

It'll grow up to three times its current size, he explains before packing it back in the basket. I keep a wary eye on it as we resume talking.

Uttar Pradesh, where Sardar Pur and Anantpur Dhaukal villages are located, is India's most populous state. It's home to more than 200 million people and more than 15,000 babies are born here daily, so it's difficult to imagine that the birth of one child could generate much excitement.

But Khazanchi was catapulted to stardom because of the circumstances of his birth, and that it came at a time when the state was getting ready to hold key regional elections. The then chief minister Akhilesh Yadav used the "birth in the bank queue" to point out what a misadventure demonetisation had been.

He invoked the infant at every political rally, insisting that PM Modi's currency ban had hurt the poor most, the sort of family that is Khazanchi's.

A few months after his birth, Mr Yadav presented his mother with the compensation money. 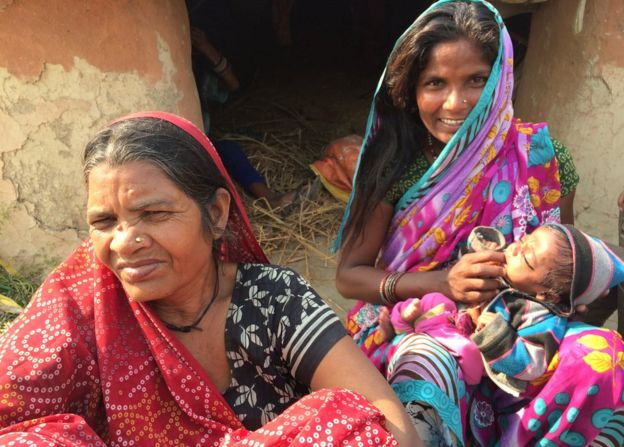 Sarvesha Devi says she spent a part of it clearing debts her husband had left and on the treatment of her eldest son, who also suffers from tuberculosis. The remainder has been secured in a bank deposit.

But then, she says, her mother-in-law demanded half the reward money and when she refused, "the family threw me on the ground and beat me up". And that's when she decided to leave.

The 37-year-old mother-of-five, who walks with a very pronounced limp, says she refused to part with the money because "I'm disabled and with my husband gone, there's no-one to look after my children and I have to secure our future".

Relations further deteriorated after she moved. Malkhan Nath, her eldest brother, says he's come under pressure from the community to send her back.

"We keep telling her that's your family, your home, please go back, but she refuses because she says they beat her and treat her badly. We don't know what to do. She's my sister: how can I tell her to go if she doesn't want to?"

The family dispute is now in the community court that Malkhan Nath calls their "high court". It comprises prominent community elders who adjudicate in matters involving Baigas. Their rulings are not legally binding, but they're rarely ignored because the defiant can face a social boycott and have to pay monetary fines.

Malkhan Nath says that in the past year he's had to appear before the "court" three times, and that once he had to pay 650 rupees as a fine because his sister defied the order to appear along with Khazanchi. 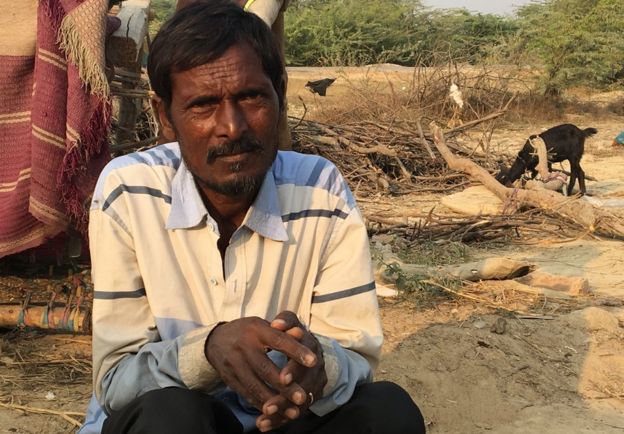 Matters came to a head earlier this month. On 1 December, a day before Khazanchi's birthday, Sarvesha Devi says two car-loads of officials turned up late at night at her home.

"I was just sitting down for dinner and Khazanchi was asleep. They insisted that we go with them to Sardar Pur for his birthday celebrations the next day. I refused, so they picked him up and took him to the car. He woke up and started crying. We raised an alarm and chased them. All our neighbours came over and helped us rescue him. They were trying to kidnap him," she insists.

Though Mr Yadav didn't win last year's regional election, he has maintained contact with Khazanchi. Local journalists say he had planned to use the toddler as his mascot for the general elections due in the summer and had announced that he would be gifting him two homes on his birthday - one each in Sardar Pur and Anantpur Dhaukal.

The plan was for the former chief minister to visit Sardar Pur on his birthday and hand over the keys to Khazanchi. With local journalists invited to cover the celebrations, it was meant to be a perfect photo-op.

But when Mr Yadav arrived at Sardar Pur, Khazanchi wasn't there so the keys were handed over to Sashi Devi.

Clearly disappointed at the toddler's absence, Mr Yadav said he didn't know about the "battle between his maternal and paternal grandmothers" and sacked two senior party colleagues for "embarrassing" him. 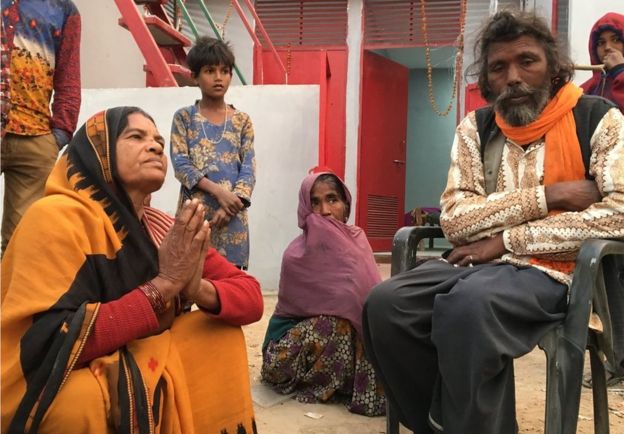 A few days later when I visited Sardar Pur, I found the spanking new house right by the roadside. Sashi Devi had gone to the market, so I chatted with her relatives and neighbours as I waited for her return. The marigold flowers used to decorate the house had nearly wilted, and the mood was downbeat too.

"A lot of people had gathered to see Khazanchi, but his mother chose to stay away," says his great-uncle Asharfi Nath. "Mr Yadav had come laden with presents, but he took it back. Sarvesha Devi could have come for an hour. By refusing to attend the celebrations, she humiliated Mr Yadav."

The villagers say all was well until Khazanchi's birth and they blame "the greed and jealousy of his mother's family and her village" for ruining things. They allege that her family wants her money and her village believes that if the boy stays there, they will see development.

Mulayam Nath, a villager, says if Sarvesha Devi doesn't want to return, she can stay on in her parental village but "she must send Khazanchi back because he is our baby, he belongs to our village. The progress and the benefits the authorities have promised must come to us".

By the time Sashi Devi returns, it's beginning to get dark. She squats on the ground outside the newly constructed house as I ask her to respond to the allegations against her.

"It's all lies," she says. "I never asked my daughter-in-law for any money. She's been coached to say what she's saying." 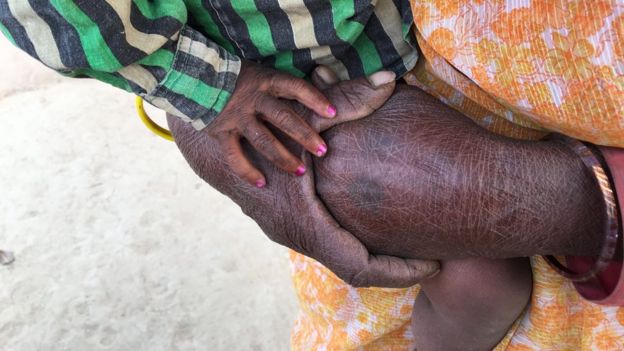 Sashi Devi talks about how Sarvesha Devi and her five children were fed and clothed by the family when her son was too sick to work. And in the months after his death, how the little money her husband and other sons brought home was shared with her even though no-one was obliged to do so.

She rejects allegations that they ever hit Sarvesha Devi. "I have four more daughters-in-law and 16 grandchildren. How come no-one else gets hit?" she asks.

She has her own stories of assault and abuse: "I went to her village twice to bring her and the children back. Each time, they hid Khazanchi, and the women there assaulted me."

Sashi Devi also rubbishes the charge that she or any of her family members could hurt Sarvesha Devi or Khazanchi. "How can we kill our own daughter-in-law and grandchild?"

As I prepare to leave, I ask her if there's any chance of a reconciliation, but she's not very hopeful.

"I've met her thrice recently and asked her to come back and live in her new house, but she has refused," she says, wiping a tear with the corner of her sari. "Earlier, I lost my son. Now I've lost my grandchildren too."