The 'personality politics' of Narendra Modi and Donald Trump

In this year's Indian election, Prime Minister Narendra Modi clocked up more than 140 rallies while chasing a second term. Sound familiar? During the 2016 US presidential campaign, Donald Trump appeared at almost as many. The BBC's Rajini Vaidyanathan looks at how the cult of personality politics is similar to both men.

On a hot and dusty evening in India's capital Delhi, crowds are gathering at an outdoor ground called the Ramlila Maidan.

Outside the ground a brass band - the sort usually seen at Indian weddings - blasts out versions of Bollywood songs, as hordes of supporters of India's ruling Hindu nationalist Bharatiya Janata Party (BJP) line up to enter.

Some people clap and dance, others chant "Modi, Modi".

The merchandise sellers spring up on you from nowhere. "Would you like a BJP umbrella?" a man asks me, as he unfurls one to reveal its green and orange party colours.

This sort of political hysteria reminds me of the energy and passion I witnessed in 2016 at rallies for Donald Trump.

Mr Trump's campaign was built on the promise of "Making America Great Again"; for BJP supporters here it's all about "NaMo Again" - NaMo being the moniker given to Mr Modi.

"National security and Pakistan are the big issues this election," the BJP worker tells me. 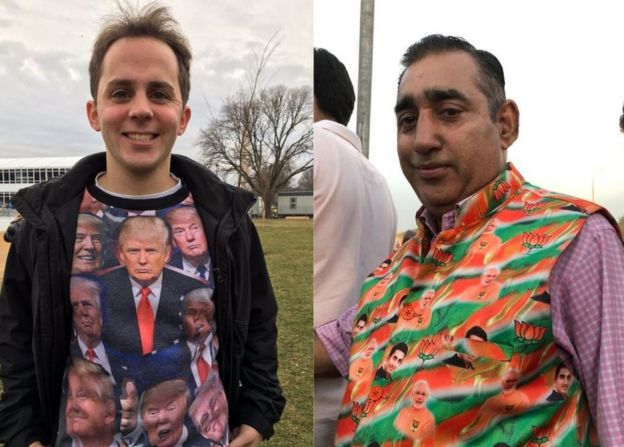 If the 2016 race in the US was characterised by Mr Trump's tough talk towards southern neighbour Mexico, then 2019 has in many ways been defined by Mr Modi's desire to show he is the strongman when it comes to relations with northern neighbour Pakistan.

Just before we go inside the rally ground, I encounter the first of many Narendra Modi lookalikes. Atri, or "little Modi" as his parents call him, is only seven years old and he's been attending rallies since he was four.

For a moment I have a flashback to an equally hot and humid evening in Florida where I'd met multiple Trump lookalikes - complete with bright yellow wigs, fake tans and red ties.

Here it's all about the white beard and glasses.

"I like Mr Modi because he does good, he helps the poor and everyone else," says Atri, who has ambitions of becoming prime minister himself one day.

Patriotic music is pumping as we enter the rally grounds, seats starting to fill up. Both leaders have a knack of making their base feel an unwavering sense of belonging. 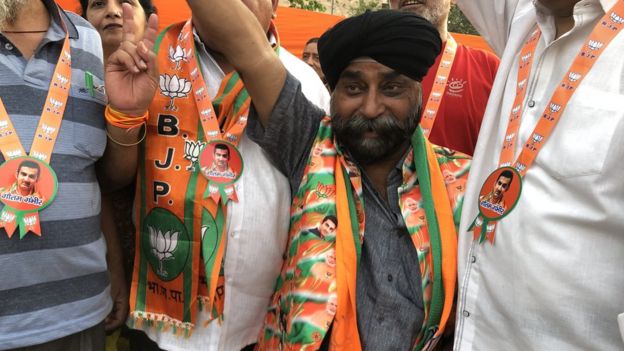 The next level is clothing.

At both rallies, the basic uniform starts with headgear. In America, it is the trademark red MAGA hats. Here, it is an orange hat with the words "NaMo Again" stamped on it.

"I've been to every one of his rallies in this area, since he became prime minister," he tells me excitedly.

"He's hardworking, he cares about the country. I like him because he's a strong leader."

As the ground fills up, and the sun begins to set, I'm struck by how many women are in the crowd, like Mridula Aneja, a Sanskrit teacher from Delhi who is at her third Modi rally.

The warm-up acts take to the stage - candidates and party members whip up the crowd ahead of the headliner. Just like super fans at a rock concert, political groupies like to outdo each other with their devotion.

All the while I'm getting Twitter notifications from Narendra Modi.

Mr Modi, like Mr Trump, uses social media to directly talk to his base, and so as the BJP leader makes his journey to the rally, my phone is pinging with alerts.

"Prime Minister Modi and I are world leaders in social media." Mr Trump said when the pair met at the White House in 2017. President Trump has 60.4 million followers - PM Modi isn't too far behind with 47.3 million. 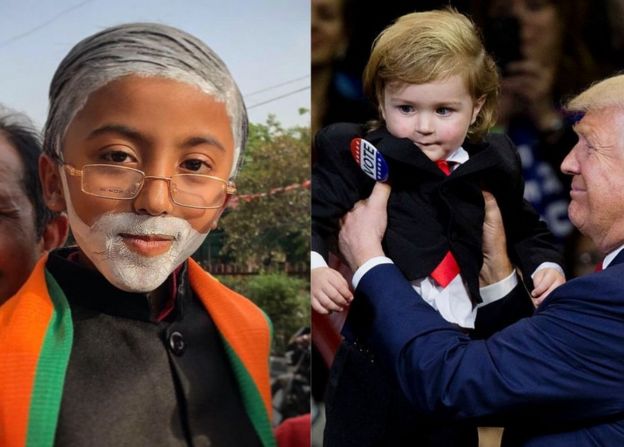 As I glance up from my phone, another Modi lookalike walks past and I do a double take.

Ranveer Dhiyam is a retired government official who now travels from rally to rally. "Five hundred people have asked me for a selfie this election," he tells me proudly.

This is the closest I've come to the man himself, if you can even count it.

Just like Mr Trump, Mr Modi is notoriously choosy about who he grants interviews to, opting for his preferred outlets, who are more sympathetic and less challenging to the BJP. The same can be said of President Trump, whose outlet of choice is Fox News.

As the crowd falls briefly silent, we are told (the real) Mr Modi is on his way. 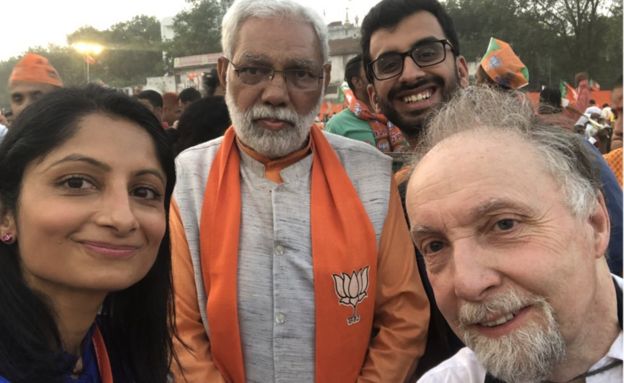 Minutes later, the prime minister is introduced on stage as the emcee calls on everyone to make a noise so loud it's "an airstrike of claps"- a reference to the airstrikes India says it carried out inside Pakistani territory earlier this year.

They do much more than that - whooping, screeching, whipping out mobile phones as they chant "Modi, Modi" in unison.

"Should we not kill terrorists in their homes?" he asks. "Tell me, should we not?"

"No, we should," the crowd replies.

Both him and Mr Trump present themselves as outsiders with contempt for those they see as the imperious ruling classes. Both ran against members of political dynasties - Hillary Clinton, whose husband is a former president, and Mr Gandhi, the scion of the Nehru-Gandhi family.

Mr Modi derides "the Khan Market gang" - a reference to one of Delhi's most exclusive areas, inhabited by the country's most privileged.

"They want votes in the name of their ancestors but when I question the work their ancestors have done, and what they've done to our country, they get irritated," Mr Modi says as hundreds roar in approval.

He did not hold back in his attacks on the opposition and many felt he had sunk to a new low when he criticised his opponent's dead father.

He described Rajiv Gandhi, a former prime minister who was assassinated in 1991, as "corrupt number one". 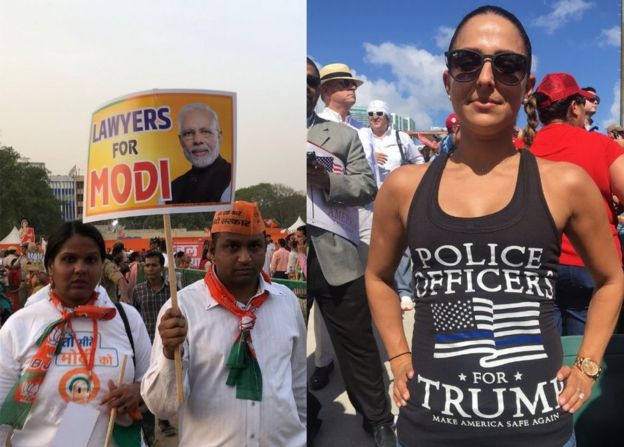 It reminded me of similar insults Donald Trump directed at Senator John McCain, who lost his battle with cancer last year.

Both Donald Trump and Narendra Modi pride themselves on being direct, but their speeches have sometimes descended into the distasteful.

But for both sets of supporters, there's a broad acceptance that it doesn't matter if the lines of political civility are crossed - as long as the job is done.

The cult of personality politics is what ties the two leaders. Their respective bases believe that personalities like Mr Trump and Mr Modi are ready to stand up for voices that are usually ignored by the ruling classes.

"I really like him - there's such an attraction," Santosh, a mechanic from Delhi tells me, as he clutches his 18-month-old baby who is also dressed as the prime minister.

"I'm ready to skip a meal but I'm not ready for anyone to disrespect our country - that's why I like Modi."