The US students who want to pay slavery descendants

Students at Georgetown University are voting on whether or not they should pay reparations to the descendants of slaves sold by the institution.

In 1838 the Jesuit university, which relied on financial support from wealthy plantation owners and often received slaves as gifts from prosperous parishioners, had fallen on hard times.

It decided to raise funds by selling 272 slaves to plantations in Louisiana, in a deal worth the equivalent of $3.3m (£2.5m).

Now, students at the elite institution are voting on what could be the first time reparations have been paid directly to the descendants of slaves in the US.

Proponents of slavery reparations argue that America built its wealth off the backs of enslaved people, and in the centuries following emancipation enacted policies to exclude black people from sharing in the wealth of the country.

Lower incomes, worse health outcomes and the higher rates of incarceration currently experienced by the black community are highlighted as vestiges of this history.

The proposal would see all Georgetown undergraduates pay a $27.20 (£21) fee per semester, which will be "allocated for charitable purposes that benefit the descendants" who mostly live in Louisiana and Maryland.

"As students at an elite institution, we recognize the great privileges we have been given, and wish to at least partially repay our debts to those families whose involuntary sacrifices made these privileges possible," the proposal reads.

"As individuals with moral imagination, we choose to do more than simply recognise the past - we resolve to change our future."

Melisande Short-Colomb is the descendent of one of the 272 people sold by Georgetown, and became a student at the university at the age of 63.

"At the bedrock there was slave labour, there was human ownership and bondage," Ms Short-Colomb says, pointing to the grand buildings of the Georgetown campus, which the sale of her ancestors helped to fund.

She is part of the team advocating for the proposal and is hopeful that it will "start a conversation across the country" on the issue of reparations.

"Reparations and repair are important to the whole of America because we are a broken society," she says. "Bridges are falling down - physically, emotionally, mentally - all around us, and we have to repair ourselves." 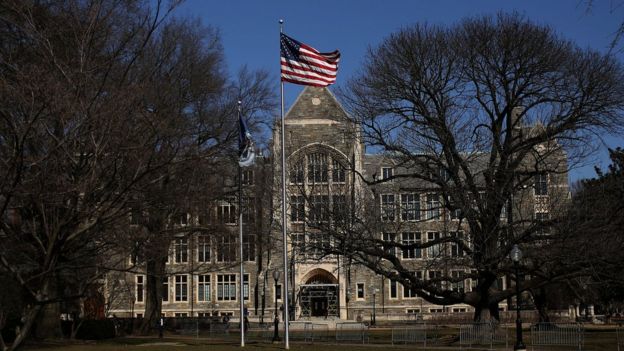 Hannah Michael, a second-year student, suggests that every student at Georgetown is the "direct beneficiary" of the organisation's slave-owning past, regardless of their personal history.

"I am daughter of two Ethiopian refugees," Ms Michael says. "My parents came to this country about 25 years ago, and have no relation to the slave trade in America."

However, she argues her education is "only possible because of the enslavement and sale of African-Americans".

"Our classes, the beds that we sleep on, the food we eat, the literal foundations of the school were created and maintained by the profit gained from the 1838 sale."

Ms Michael is keenly aware of how the Georgetown vote reflects a broader national conversation, and hopes it will spark more action on the issue.

"[The vote] tells us there are things we can do right now to benefit people who are impacted by the history of slavery.

"I hope people outside the university see that it is possible to grapple with the difficult history of America."

However not all students agree with the proposal.

Hunter Estes, who is studying international politics, says he thinks the fee is an "arbitrary number" and "an attempt to compound a moral obligation onto the whole student body".

He suggests that any reparations should be "opt-in" to avoid "imposing a moral structure" which he says "crushes an aspect of liberty".

Mr Estes suggests the university should focus on providing education to the descendants of the 272 people sold, rather than "throwing money at the problem".

He adds it is "tough to say" if he personally benefits from Georgetown's slave-owning history.

"I am trepidatious about applying a 2019 standard of morality in evaluating history," "If we are constantly apologising about the issues of the past, we'll always find something to apologise about."

Sam Dubke, an international economics student, is worried by some of the practicalities of the proposal.

"The $27.20 figure is totally symbolic," he says. "There is no analysis or systematic investigation of the amount."

He also questions how the roughly $400,000 expected to be raised in the first year will be spent, suggesting it is "not something that can just be done on a whim".

Further, Mr Dubke suggests student action should be directed at the Working Group on Slavery, Memory, and Reconciliation set up by the university in 2015 to engage with the university's past.

"We should put pressure on the university administration to take action, rather than relying on students to pay out of pocket."

"Current students are not to blame for the past sins of the institution, and a financial contribution cannot reconcile this past debt on behalf of the university," he wrote in the student newspaper.

Georgetown spokesman Matt Hill told the BBC "student referendums help to express student perspectives but do not create university policy and are not binding on the university."

"Following a formal apology to Descendants, renaming two buildings, and offering Descendants the same consideration in admissions that it gives members of the Georgetown community, we are continuing to deepen our campus' engagement to develop education and programming that will enable all students to meaningfully engage with Georgetown's history of slavery," he said in a statement.

Slavery reparations have become a hot button issue in the US recently, as a number of Democratic presidential hopefuls have floated the idea as part of their 2020 nomination bids.

While the level of support for reparations varies between candidates, the migration of the issue from the political fringe to the mainstream reflects a wider shift in US political discourse.

William Darity Jr is a professor of public policy at Duke University, and is one of the leading scholars on reparations in America.

"I am refreshingly surprised that the reparations conversation has become so rich and expansive in the public arena recently," he says.

"To see multiple presidential candidates talking openly about the issue means the conversation we are having is unlike any we have had on the topic before in the United States of America."

Democratic senator, and presidential hopeful, Cory Booker recently introduced a bill to study the possibility of reparations for the descendants of slavery as "a way of addressing head-on the persistence of racism, white supremacy, and implicit racial bias" in the US. 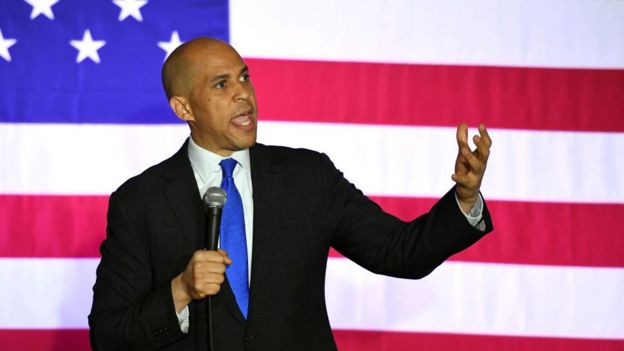 Mr Darity says that this bill could provide a way to analyse how reparations would work.

"We have a court system where when someone is injured... we find a way to assign a value to that. I am always startled when people say we couldn't do something similar for the decedents of slaves."

Mr Darity uses the example of the "40 acres" promised, but never given, to former slaves.

"I have done a computational analysis of the value of the 40 acres of land that slaves were promised. That would work out as around $80,000 for each eligible American."

Mr Darity says that he "admires" the Georgetown students, but has "strong reservations" about "piecemeal reparations", and hopes such local initiatives don't distract from the need for national actions.