Tributes have been pouring in for veteran Labour MP Paul Flynn who has died, aged 84, after a long illness.

Mr Flynn represented Newport West since 1987 when he was first elected.

Labour leader Jeremy Corbyn described him as an independent thinker who was a credit to the party and Wales' First Minister Mark Drakeford called him a "giant of the Welsh Labour movement".

Newport West Labour Party confirmed in a tweet that Mr Flynn died on Sunday, saying he was "a hero to many of us".

Mr Flynn announced in October he would step down from Parliament "as soon as possible" after becoming confined to bed because of rheumatoid arthritis.

I’m very sad at the passing of my good friend Paul Flynn. He had such love for Newport, knowledge of radical South Wales history and a dry wit. He was an independent thinker who was a credit to the Labour Party. He will be greatly missed.

Welsh Labour leader Mr Drakeford said: "He was one of the most effective communicators of his generation - inside the House of Commons and outside.

"But it was Paul's willingness to speak up for causes beyond the political mainstream which marked him out as a politician of real courage and integrity."

Mr Drakeford said it had been "a privilege to have worked with him, in the run-up to the devolution era and beyond".

Announcing his intention to quit politics, Mr Flynn said he was very frustrated not to be taking an active role after three decades.

He campaigned on a wide-range of issues, including benefits, animal welfare and devolution.

He also campaigned for cannabis to be legalised for medicinal use, and in 2017 called for users to come to Parliament to break the law.

A career backbencher, upheaval in the Labour party saw the MP briefly serve on the opposition front-bench in 2016.

Mr Corbyn said: "I'm very sad at the passing of my good friend Paul Flynn. He had such love for Newport, knowledge of radical South Wales history and a dry wit.

"He was an independent thinker who was a credit to the Labour Party. He will be greatly missed."

Mr Corbyn's deputy, Tom Watson, said Mr Flynn was "one of the great characters in politics" adding he was "loved and revered by many",

Jayne Bryant, the Welsh assembly member for Mr Flynn's constituency, first met the MP when she was nine years old.

"He brought politics alive to me then and has done so ever since," she said.

"Respected across the political divide with his wonderful turn of phrase, witty comments and incisive mind - undoubtedly, Paul spoke truth to power."

She told BBC Radio Wales: "He absolutely loved Newport. He was so proud to represent his constituency.

"He really, really cared for people and I think that sometimes gets lost in politics." 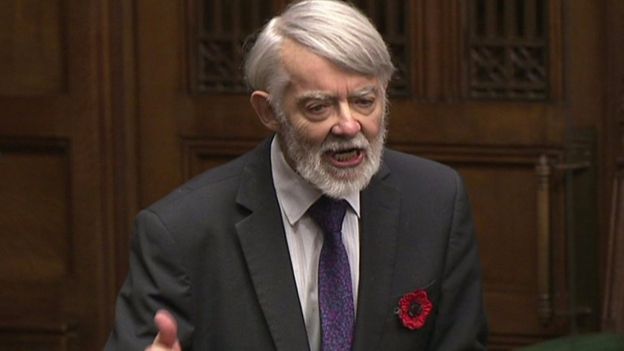 Conservative Welsh Secretary Alun Cairns said Mr Flynn was an "exceptional constituency MP", and said it was a "privilege to work with him".

Cardiff West MP Kevin Brennan said Mr Flynn was a "passionate pursuer of justice for the least well off".

He added: "He was a wonderful man who made a huge contribution to Welsh politics."

"We've lost someone who put his values and his beliefs at the heart of everything he said and did," wrote Blaenau Gwent AM Alun Davies.

Jo Stevens, the Cardiff Central MP, said Mr Flynn was a "kind, principled, fascinating man who was devoted to his constituents".

She added: "It's a terrible loss and a terrible personal loss as I looked on Paul as a very close friend.

Monmouth MP David Davies said he used to grill Mr Flynn as a youngster when he visited his school in Newport.

"One day he said if I felt that way I should go off and become a Tory MP," Mr Davies said. "He used to joke saying it was his fault that he inflicted a Conservative on Monmouth years later."