The US Coast Guard has removed a team member from duty after he was accused of making a "white power" sign on air.

The unidentified employee was seen glancing at the camera during an MSNBC interview on Friday night before briefly making the hand gesture.

He was at a desk in the background as the cable channel spoke to Coast Guard Commanding Officer Capt John Reed in Charleston, South Carolina.

The agency responded swiftly to the ensuing social media backlash.

The incident occurred as MSNBC covered the emergency response to deadly tropical storm Florence, which is drenching the Carolinas.

"It won't be tolerated." 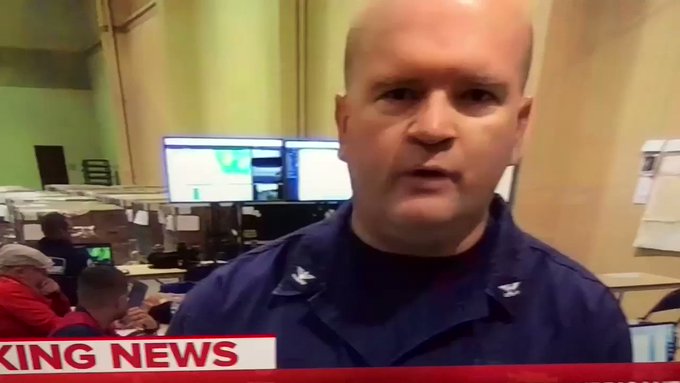 @AngryBlackLady Just saw this on MSNBC during interview with Coast Guard. Check out white-power in background. @uscoastguard

The Coast Guard tweeted that it was aware of the "offensive video" and was investigating the matter.

In a statement, the agency said it was a "frustrating distraction".

We are aware of the offensive video on twitter - the Coast Guard has identified the member and removed him from the response. His actions do not reflect those of the United States Coast Guard.

A number of Twitter commentators were in no doubt about the nature of the momentary hand gesture.

One user, @jgobble, tweeted: "Did you all see this guy flash White Power on TV? OUR OWN COAST GUARD!!! This needs to be investigated and this man needs to be ousted/removed/discharged!"

Another, @OKCopyThat, posted: "That was flat out blatant! Lord have mercy on us. These evil people are among us."

Yet another, @TomAmestoy, tweeted: "The Coast Guard is filled with heroes and apparently at least one racist bringing shame on an honorable crew."

But not everyone was convinced.

One Twitter user, @Dpatcorb, said: "Bahahahahaha. You seriously have the mental capacity of a 2 year old if you think that's a white power sign." 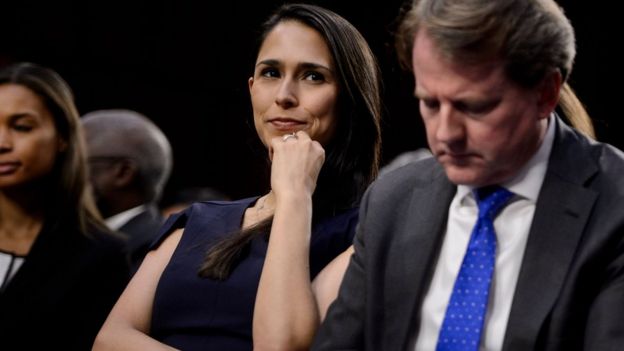 It is not clear how the thumb-and-forefinger 'OK' hand gesture became associated with "white power".

It apparently began as an online hoax before it was adopted by far-right sympathisers and even some Trump supporters to goad liberals.

Earlier this month, left-wing activists accused a former Trump administration official of making the symbol during a Senate hearing.

Zina Bash was pictured sitting in the background during a confirmation hearing for Supreme Court nominee Brett Kavanaugh.

Ms Bash, who is of Jewish-Mexican heritage, was branded a "neo-Nazi" or "white supremacist".

Her husband, Texas prosecutor John Bash, angrily pointed out his wife is the grandchild of Holocaust survivors.

"Everyone tweeting this vicious conspiracy theory should be ashamed of themselves," he said.

"We weren't even familiar with the hateful symbol being attributed to her for the random way she rested her hand during a long hearing."