Why are people still not wearing seat belts?

Figures showing that more than one in four car occupants who were killed in crashes in Britain last year were not wearing a seat belt have been described as "shocking" by both road safety campaigners and the government.

The Department for Transport data shows the proportion of deaths has reached its highest level since records first started being kept in 2013.

But what could lie behind the rise - and can attitudes be changed?

Britain remains one of the safest places to drive in Europe. And following steep falls between the late 1970s and 2000s, the number of road deaths has remained fairly constant.

A 2014 survey found 91% of rear seat passengers in England and Scotland wore seat belts - compared with 98% of drivers and 97% of front-seat passengers.

But the government's road safety campaign Think! cites research which shows younger drivers and passengers are less cautious - with those aged 17-34 having the lowest seat belt-wearing habits combined with the highest accident rate.

Yet despite warnings that people are twice as likely to die in a car accident if they do not buckle up, some are still willing to take the risk.

According to the Department for Transport, adults who do not wear a seat belt include those who occasionally forget as well as others who actively choose not to wear one.

Some people told researchers they found seat belts uncomfortable or inconvenient to wear. Others said it depended on the type of journey. For example, they would wear one on a long or unfamiliar route or if they were on a motorway. 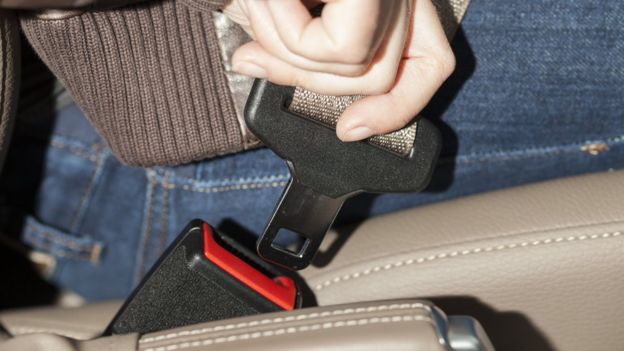 According to the road safety charity Brake, government "inaction" on road safety is breeding "an environment of complacency" among drivers and passengers.

He said a decline in roads policing over the last 10 years may have encouraged people to feel they can get away with illegal driving behaviour.

"It is surprising that anyone these days would get into a car without belting up," he said.

"Drivers generally may also feel more cocooned and less at risk because of the level of safety features in their cars such as air bags, automatic braking and side-impact protection."

Mr Williams added: "We have generations of drivers who have grown up without seeing the 'clunk-click' messages that many of us frequently saw on our screens and made putting on a seat belt second nature."

The DfT maintains it is always looking at ways of making roads safer and said this year's Think! campaign is aiming to teach young people the "importance of wearing a seat belt".

Its data shows the proportion of fatalities not wearing a seat belt varied between 19% and 22% in the years 2013 and 2016, although not all police forces reported figures.

A 2006 European Transport Safety Council report found front seat reminders can be provided at minimal cost because the same sensors are used in airbag systems - but rear-seat systems are more costly.

However, regulations requiring car manufacturers to put seatbelt reminder systems in all front and rear seats on new vehicles are set to come in force from September 2019.

Seat belts and the law