Paxex Forum / Entertainment / Fashion / Wow, Open' polyamorous throuple who live together with their three kids reveal they are planning to marry

Wow, Open' polyamorous throuple who live together with their three kids reveal they are planning to marry

A polyamorous triad who are raising there children together have revealed plans to officially marry as a trio and have more kids in the future - while also dating other people outside of their three-way relationship.

Married couple Cody and Kayla Kurkowski had two children together when they met Katherine Zepernick on Facebook three years ago, and decided to welcome her into their relationship.

Three months later, Katherine, 27, moved in with Cody, 28, and Kayla, 27, and the trio has been living together in their Ohio home ever since - and in February of this year, they welcomed a baby girl, Khloe-Rae, who is Kayla and Cody's third child, but the first to be born to the throuple. 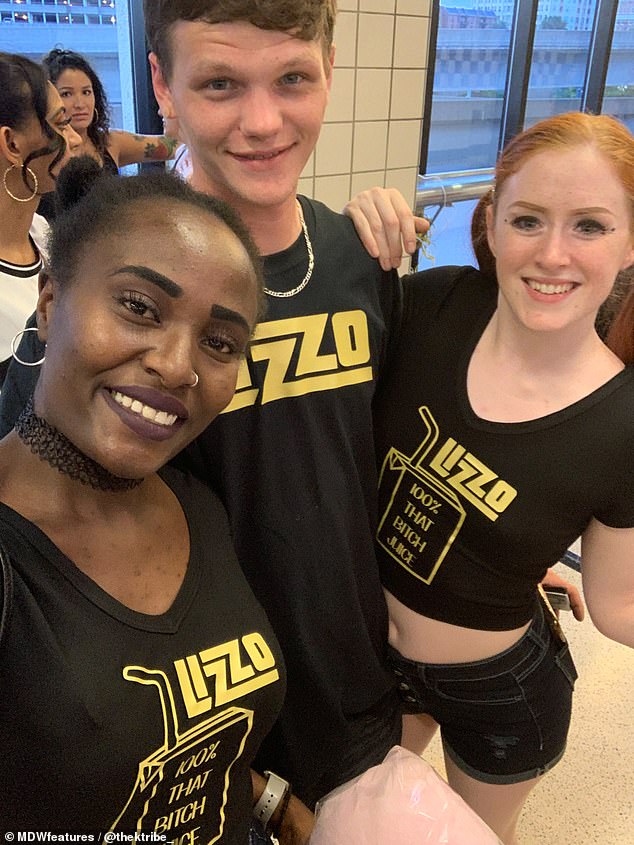 But despite living in a committed relationship, raising three children together, and planning for more kids in the future, Cody, Kayla and Katherine are also embracing the idea of an open triad, meaning that they are free to date other people outside of their relationship.

Technician and dance teacher Kayla met while they were both in high school and they have been together ever since.

In June 2014 they welcomed their first child, Cole, now five, and in 2016 they got married and welcomed their second child, Kyson, three, in October of that year.

Soon after, Kayla was introduced to call center representative Katherine on Facebook where they started chatting and grew fond of each other.

They both arranged to meet each other for a coffee with Cody and they all hit it off very well. Over the next few months, they began to grow attached, so Kayla and Cody then asked Katherine to be their girlfriend and became an official triad in January 2017.

Three months after becoming exclusive, Katherine moved in with Kayla and Cody and they became a family.

But while they have been committed to each other, they are not opposed to the concept of an open triad, meaning that they can each date other people. 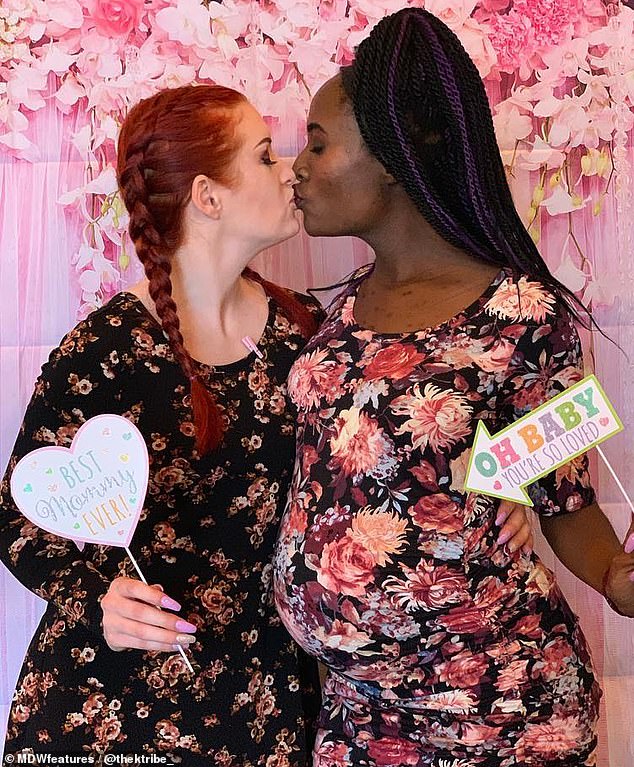 They all claim to share their parenting responsibilities between each other and that they are all equally loved by their children. They are now planning to get married in 2022, open a bed and breakfast business together and want to have two to three more children.

'I met Kayla on Facebook, she introduced me to her husband after a really nice coffee date; we hit it off very well, we all felt that we clicked very well, and wanted to spend all of our time together,' Katherine said.

'For the first three months of our relationship, I was traveling to and from Dayton twice a week and spending my days off with them. After a quick three months they asked me to move in with them.

'There have been bumps and learning curves in the road just like any relationship, but we've always done everything we can to make our family work.

'Cody and Kayla have been together since high school and then met me after they were married and had their first two babies.

'It was love at first sight for all of us. There was a special feeling we got that we knew meant there was something special between us. 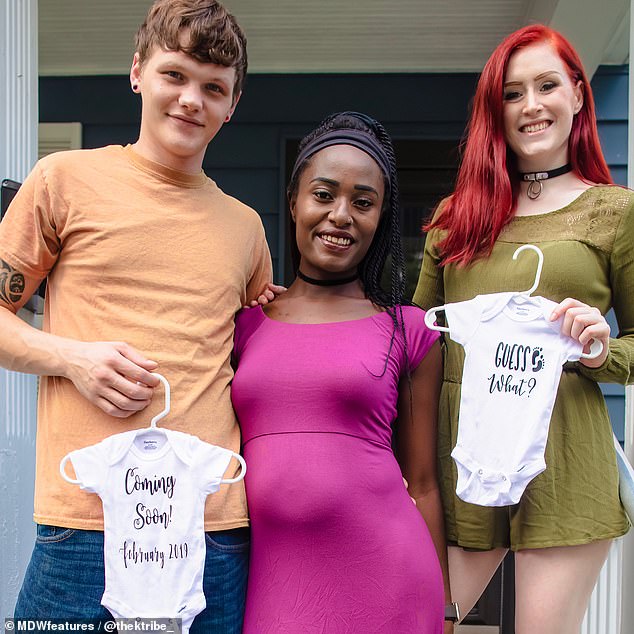 To us, polyamory gives you the ability to construct the relationship structure that really works for you. A triad formation is what is working for us right now.

'We don't have any plans to change that in the future, but we also aren't against expanding our tribe in the future. But we are happy how we are now.

'We are an open triad, which means we can date separately, dyadically, or as a triad. However, with young kids and busy work schedules we aren't looking to date right now. We just don't have a lot of extra time to give without taking away from our family at the moment.

'Two years into our relationship, we decided it was time for another baby and Khloe Rae was conceived in June.

'We got engaged in January on our second-year anniversary, and Khloe-Rae was born in February immediately after.

'We all parent equally; no person has more parenting authority than another, and we all make decisions about them together.

'We have explained our relationship to them already; we tell them it's just like any other family. All their parents love them, and that every family is different.

Some people have no parents, one parent, two parents, step-parents, etc. They have never had any problems or questions about it.' 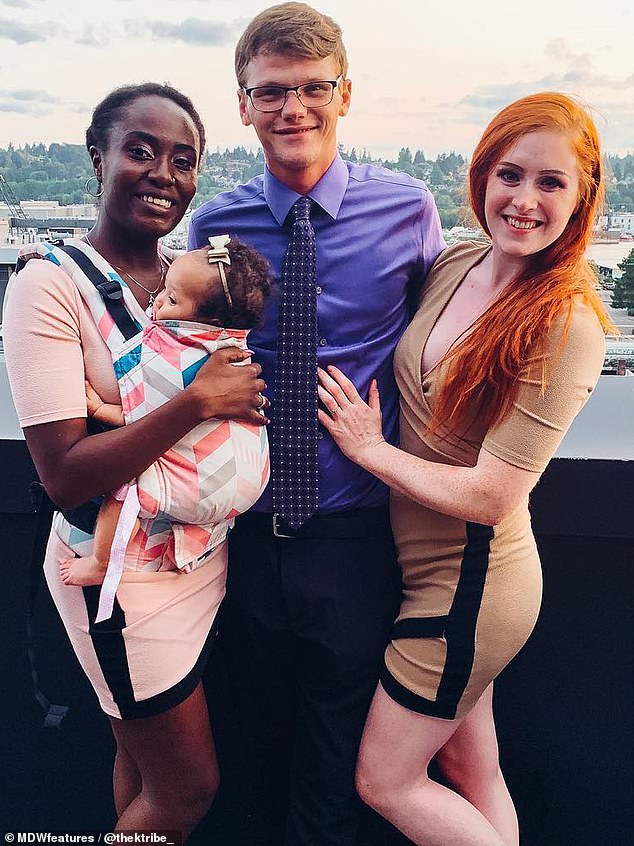 In January 2019, Cody and Kayla both proposed to Katherine with candles, flowers and balloons ready for her when she came home from work with their song Sugar by Maroon 5 playing in the background.

Before the proposal, Cody and Kayla wrote a joint letter to Katherine's parents detailing their plans to get their blessing.

'The three of us do our best to be open and honest with our followers, demonstrating that no relationship is perfect, but with enough work and dedication we've made it last,' Katherine said.

'Everybody deals with jealousy, but it usually means there is a deeper issue that is causing the reaction. It takes a lot of self-evaluation and will to do a lot of self-reflection.

'Communicating your feelings with your partner about jealousy is important so that you don't start to take anything out on them.

'Cody and Kayla wrote a letter to my parents to let them know their plans and intentions. They set up candles, flowers, and balloons for me when I was coming home from work.

'We had our song playing outside as I walked up. Afterwards we had a small party at our house to celebrate with some of our close friends and family.

They got me a ring a couple of months beforehand to make sure it was the right size and then planned to propose the night before our third anniversary of when they asked me to be their girlfriend.

'We plan to have two to three more children in the future and hope to open a bed and breakfast in Colorado one day.

'We know that polyamory isn't for everybody, but we do think that more people should know it is an option if you feel like it's right for you. It isn't just a sexual thing either. That's one of the first questions we get. 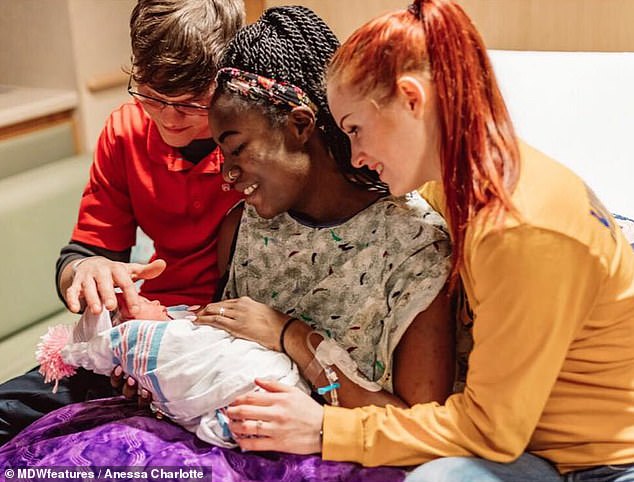 'We get a lot of confused looks from strangers, but people usually keep to themselves with their opinions for the most part.

'We've received some negative reactions on Instagram and some people assume I am Cody's sister and that I just live with them.

'We just want to be able to let people know that polyamory isn't a threat to monogamy, which is something we've run into a lot just being out with our relationship.

'We are all feminists and are bringing our children up to be inclusive and open people and we're very proud of that.'