A WRESTLER has been hospitalised after being hit over the head with a brick in a brutal death match. Angel o Demonio took on Cuervo at the Lucha Memes and Lucha Libre Boom co-promotional show near Mexico City.

The brutal encounter ended when Demonio hurled a brick at the back of Cuervo’s head – breaking in half across his skull. Ringside doctors quickly called off the bout and Cuervo was taken backstage and transported the hospital. Demonio later apologised for his rival not being able to finish the match – but moaned about hard chair shots he had taken during the match. Cuervo managed to walk backstage with help from the referee – but there has been no update of his condition.

Lucha bosses called an ambulance which ferried Cuervo for hospital.

He was knocked unconscious by the initial blow.

Cuervo, 44, real name Jaime Correa, seemingly had no idea the blow was coming. 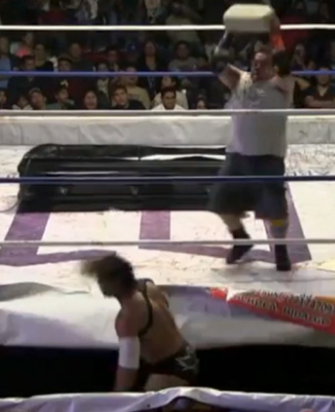 Video shows Cuervo rummaging beneath the ring for more weapons during the match.

The bout also featured barbed wire, tables and a casket.

Demonio then charges across the ring with the concrete block in his hand, hurling it down out of the ring.

It strikes Cuervo across the back of the head and splits in half – leaving him splayed at the ringside. 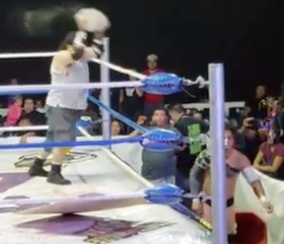 BRICK: Angel o Demonio threw the concrete block at the back of Cuervo's head (Pic: YOUTUBE) 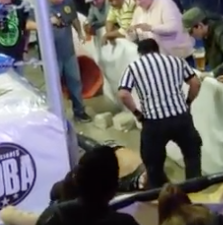 SKULL: Cuervo was knocked out by the brick thrown by Angel o Demonio (Pic: YOUTUBE)

Fans look horrified as the referee calls for the ringside doctor.

And large blood stain can be seen next to Cuervo, buts it's unclear if this was from the brick hit or earlier in the match.

Demonio then spends the closing moments of the bout playing to the crowd.

He even climbed into the casket as he seemingly mocked his seriously injured opponent. 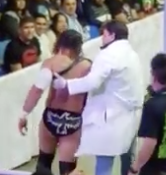 Lucha reporter LuchaBlog on Twitter wrote: "Angel o Demonio threw a brick at the back of Cuervo's head when he clearly had no idea it was coming.

"Cuervo was knocked out, regained consciousness quickly after.

“For people asking ‘why’ – there is no good answer.

“Obviously outside of ‘he could, he’ll get in no trouble for it, and it might make him viral famous."