Chinese-Swedish actor Zhao Lixin has apologised after appearing to "defend" the Japanese forces which invaded China.

In a social media post on Tuesday, Zhao questioned why the Japanese military did not pillage and destroy the Beijing Palace Museum during the Second Sino-Japanese War.

He has faced a backlash online from people who have accused him of "forgetting his roots", some drawing comparisons with other recent Chinese-Swedish grievances.

Zhao's original comment on social media site Sina Weibo has been deleted, but screenshots of it have been widely shared online in China.

"Why didn't the Japanese steal relics from the Palace Museum," Zhao's post read, "and burn it down during the eight years the Japanese occupied Beijing?

"Is it in line with the nature of the invader?"

His comments refer to the Japanese occupation of China during the Second Sino-Japanese War of 1937 to 1945. The Japanese captured many major Chinese ports and cities during the war, beginning with Beijing.

Zhao was born in China and grew up in Sweden. He returned to the country and found success as an actor, first appearing in Breaking Out in 1999.

It is this time abroad that seemed to be the source of contention online.

"You are not Chinese and you cannot speak for China," said another. "How much damage did the Japanese invasion of China cause? You don't understand anything. Don't pretend to know more about the history of the country."

Some people have defended Zhao, with some people calling it normal to discuss historical events, and others saying that they "understand what he meant".

But the backlash can be best explained by one commenter, who wrote that "this kind of vibrant topic is still not good on the Internet".

Zhao, who has seven million followers online, has now said he "sincerely apologises" for his "inappropriately expressed post". 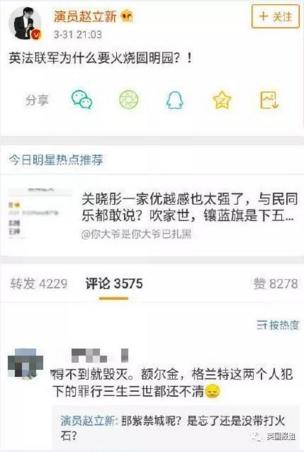 "I deeply, deeply express my apologies," he said. "I was not and will never defend the invaders. I strongly condemn them."

He has subsequently posted links to China's Central & State Organs' Working Committee, quoting from them: "Any country's citizen should, with regards to his country's history, carry some knowledge. This should especially be accompanied with a warmth and respect for the history of their country."

Despite this apology, he has been told to "get out of China" and "go back to Sweden" on social media, evoking serious and less-serious tensions between China and Sweden in the past year.

In February 2019, Sweden recalled its China envoy over her involvement in a bizarre meeting involving the daughter of a detained Swedish-Chinese bookseller.

And in September 2018, there was outrage when a satirical Swedish television show joked about Chinese people eating dogs and defecating in public.